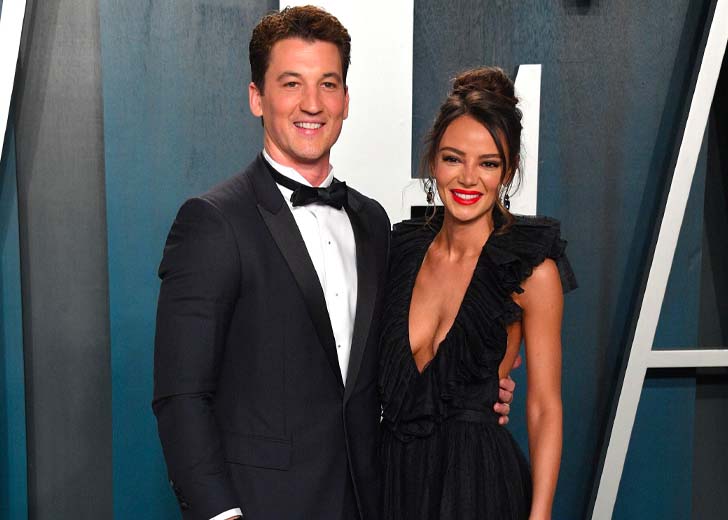 “After we met, I knew she [Keleigh Sperry] was the one,” Miles Teller told People.

Miles Teller is an American actor best known for his roles as Andrew Neiman in a psychological drama, Whiplash, and Bradley Rooster Bradshaw in the action movie, Top Gun: Maverick.

The actor first rose to fame when he starred as Sutter Keely in The Spectacular Now and Peter Hayes in the Divergent film trilogy. His movies include Fantastic Four, Get a Job, War Dogs, and Spiderhead.

His television works include The Unusuals, Too Old to Die Young, and The Offer.

Besides movies and television series, Teller has also played in several short films like Moonlighters, A Very Specific Recipe, The Musicians, and The Track Meet.

How did Miles Teller meet his wife, Keleigh Sperry?

According to People, Teller and his present wife Keleigh Sperry met at an after-party for The Black Keys in 2013.

During an interview with People in 2017, the actor talked about their first encounter and instant attachment.

Miles Teller and his wife Keleigh Sperry at Korea for the promotion of ‘Top Gun: Maverick.’ (Source: Instagram)

“I told my buddy, ‘I think I’m going to be with this girl for a long time,'” Teller uttered after saying he and Sperry “just clicked” after their meet at the 2013 Grammy after-party.

He described their first meeting, saying, “Keleigh had caught my eye early in the night, and we talked. I didn’t think it went well, but after a few more attempts I got her to dance with me.”

He continued, “And a week later, we went on a date. After we met, I knew she was the one.”

After being in a relationship with Sperry for four years, Teller popped the question while on a safari in South Africa. The setting was quite romantic, with elephants roaming in the background and led Sperry to a tree with a rose and note tied which said, “May 11, 2013-August 20th, 2017.”

The actor then got on his knees and told Sperry, “This was the first day that I asked you to be my girlfriend, and today was the last day you woke up as my girlfriend.”

Sperry replied “yes” immediately and said the proposal was perfect. She explained, “I’ll never get the image out of my head of him down on one knee with a tear in his eye.”

After the engagement, the couple instantly decided on Maui for their wedding as Sperry’s family spends every summer there.

On September 1, 2019, Teller and Sperry got married in Maui, Hawaii. They exchanged their wedding vows in a Catholic church, and to celebrate the marriage, and the reception took place at Ritz Car Kapalua Hotel.

The mother’s jewelry, which all of the bride’s sisters wore down the aisle at their weddings, was also worn by the bride. She also flaunted a Monique Lhuillier wedding gown.

According to Vogue, Teller, on the other hand, wore a custom Celine designed by Hedi Slimane.

People revealed that the newlyweds continued the celebrations all weekend by hosting a beach party for their loved ones.

It has already been about three years since Teller and Sperry got married, but there is no information regarding the pair’s family planning, not even a slight hint of how many children they want.