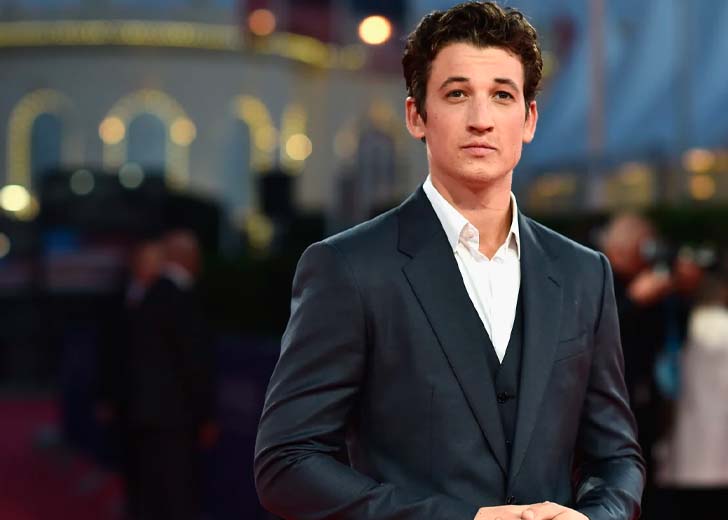 Miles Teller has gained muscles for his roles in two movies.

Miles Teller is a talented American actor who is presently making headlines for his amazing portrayal of Lt. Bradley ‘Rooster’ Bradshaw in the 2022 movie Top Gun: Maverick, starring Tom Cruise, Jennifer Connelly, Manny Jacinto, and others.

In addition, he is starring as Albert S. Ruddy in the TV mini-series The Offer and is set to appear alongside Chris Hemsworth in the Netflix crime drama movie Spiderhead.

Besides that, Teller has appeared in multiple movies and TV shows such as Rabbit Hole, Footloose, Project X, The Spectacular Now, Whiplash, Fantastic Four, Bleed for This, Only the Brave, and Too Old to Die Young.

Scroll down as we discover more about the actor, including his net worth, height, ethnicity, and more!

How much is Miles Teller’s net worth?

Celebrity Net Worth reports that Teller has accumulated an estimated net worth of $10 million.

All of his fortunes are thanks to his successful acting career. As of this writing, Teller has been in some renowned acting projects – mostly movies – that have done well at the box office.

Teller made his acting debut in 2004 and has been on the rise since then. He presently has 30 credits as an actor in his IMDb profile, and four more are to be added soon once his upcoming projects get released.

How tall is Miles Teller?

According to Teller’s IMDb profile, the actor has a height of 6 feet 1 inch or 1.85 meters. But, on the other hand, multiple media outlets have reported him to be 6 feet or 1.83 meters tall.

There is only a small difference between the two data but it couldn’t be said which one is correct. Nonetheless, it cannot be discarded that Taller stands at a towering height.

Miles Teller got jacked for his roles in two movies

Now that Teller’s height is mentioned, let’s talk about his weight. Reports suggest that the Downingtown, Pennsylvania native weighs around 79 kg or 174 lbs.

However, he weighed a bit more in the past. Around 2016, the actor used to weigh around 85 kg or 188 lbs. However, when he was cast in the movie Bleed for This, he had to go through weight loss and gain some muscles.

The 2016 movie was about a renowned boxer who had broken his neck in a car accident, and Teller portrayed the role of Vinny Pazienza.

Miles Teller gained muscles for his role as Vinny Pazienza in ‘Bleed for This’ (Photo: NS News)

To reduce his weight and get ripped, Teller worked together with trainer Darrell Foster and nutritionist Gary Kobat. He had cut off alcohol and cheat meals, trained for five straight months, ran five-mile each day, and did boxing.

Around two years after he did that, Teller was once again seen jacked up, this time for his role in the anticipated movie Top Gun: Maverick. His process behind that is yet to be revealed, but it could be assumed that he followed the same tips.

Born on February 20, 1987, as Miles Alexander Teller, the Thank You for Your Service star is the youngest child of his parents. His father’s name is Michael, and his mother’s name is Merry.

While his father is a nuclear power plant engineer, his mother is a real estate agent. Apart from his parents, he has two older sisters named Erin and Dana.

Coming over to Miles’ ethnicity, he comes from a family with a long ethnic heritage, thus it could be said that he has mixed ethnicity. To go deep into his family’s heritage, his parental grandfather was of Russian Jewish descent.

His parental grandmother is of Irish and Polish ancestry. Additionally, it’s reported that one of his mother’s lineage is English, Irish, German, and African-American [from one of his maternal great-great-grandfathers].