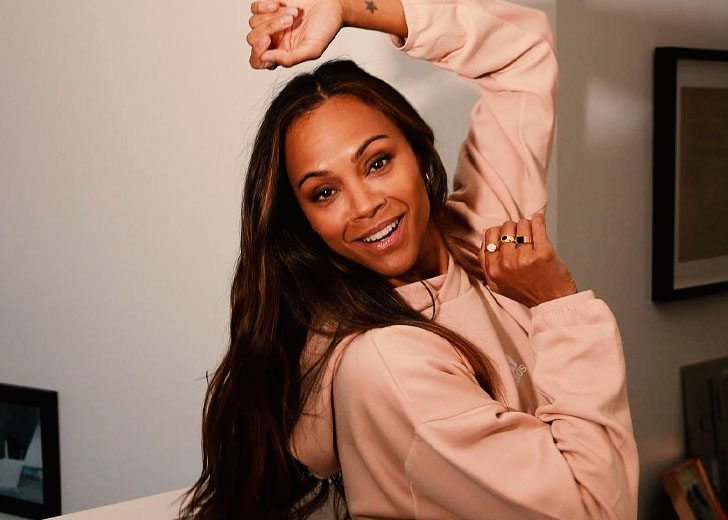 Zoe Saldana is a talented American actress and the first and only (to date) actress who has appeared in three of the five highest-grossing movies of all time: Avatar, Avengers: Infinity War, and Avengers: Endgame.

In Avatar, she portrayed the role of Neytiri. Similarly, in the latter two movies and the Marvel Cinematic Universe, she plays the role of Gamora – a role which she will be reprising in Guardians of the Galaxy Vol. 3.

Soon, she will also be seen in Netflix’s upcoming time-travel movie titled The Adam Project – releasing on March 11, 2022 – starring Ryan Reynolds, Mark Ruffalo, Jennifer Garner, Catherine Keener, and others. Her role in it is presently undisclosed.

How old is Zoe Saldana?

Born in 1978, Saldana is presently 43 years of age. She celebrates her birthday every year on June 19. Her birth name is Zoë Yadira Saldaña Nazario, and her zodiac sign is Gemini.

The actress was initially raised in her birthplace of Passaic, New Jersey, by her Dominican father, Aridio Saldaña, and her Puerto Rican mother, Asalia Nazario. Apart from her parents, she has two sisters, Cisely and Mariel.

When she was almost 9, her father passed away in a car accident. After that, her mother decided to move her family to the Dominican Republic. When she was there, she attended ECOS Espacio de Danza Dance Academy and learned dancing, including ballet.

Later, her mother remarried a man named Dagoberto Galan. From her mother’s second marriage, she has a half-sibling named Nipo Saldaña. At the age of 17, Zoe and her family returned to the United States.

Upon her return, she enrolled at the Newtown High School.

Saldana was born in the United States, so there is no confusion as to her nationality – she is American.

However, Saldana seems to be the kind of person who doesn’t like to be asked about her ethnicity. During her April 2009 interview with Esquire, she said she hates when someone asks that question.

Adding more to her statement, she said, “I’m Dominican, Lebanese, Indian, Irish, Jamaican. But I hate going into that. I just say, ‘I’m from Queens.’”

The Maya and the Three actress is such tall that she could easily be spotted in a crowd. As per reports, she stands at a towering height of 5 feet 7 inches or 1.7 meters.

Saldana is health-conscious and likes to keep her body in shape. But, due to her profession, there might be an increase or decrease in her body weight as per the acting project’s requirement.

She could be seen doing regular exercises and following diet plans on her Instagram handle. Coming over to her exact weight, she had mentioned in one of her interviews that she weighs around 52 kg or 115 lbs.

She had said, “This is how much I weigh [115 pounds], it’s something I can’t control, it’s who I am. I’ve always been a very thin frame, I was a ballet dancer. I don’t think it was to make an issue of my weight. I think it was to say for a lightweight person, I seem to be really strong-minded.”

How much is Zoe Saldana worth?

As mentioned in the start, Saldana has been a part of three of the five highest-grossing movies of all time – and all of those movies have crossed the $2 billion mark at the box office. So, it’s easy to say that the actress has been a part of some high-budget films.

Considering all that she has done in the entertainment industry, how much is her net worth? According to Celebrity Net Worth, Saldana has accumulated hefty net worth, amounting to $35 million.