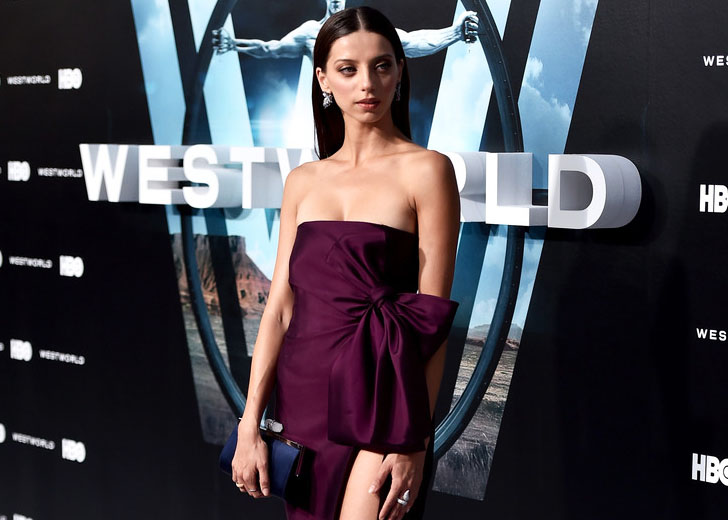 Angela Sarafyan is a talented Armenian-American actress who has won the hearts of many through her performances in numerous movies and TV shows, most notably via her portrayal of Clementine Pennyfeather in HBO’s Si-Fi television show, Westworld.

Now she is set to appear on the American comedy-horror movie King Knight, which releases on February 17, 2022, following its initial release at the Fantasia Film Festival on August 8, 2021. In it, she plays the female lead role of Willow.

While the 38-year-old actress has charmed the audiences through her acting skills, her fans have been wondering for a long time if there is anyone that has charmed the actress. Does she have someone special in her life? Find out!

Does Angela Sarafyan have a husband? Or a boyfriend?

Sarafyan’s present relationship status remains unknown to the media and public. It is so because she prefers to keep her romantic life details away from her limelight.

There have been no reports of the actress having a husband or a boyfriend in recent times. Similarly, there is no presence of a partner on her social media handles — she has only posted pictures related to her profession.

In addition, there has been no news of the actress getting married to a husband in the past. So, to conclude, her personal life is a mystery. Thus, it is only fair to say that Sarafyan is presently single and doesn’t have a husband or a boyfriend.

Although Sarafyan might be single now, there were times when she was rumored to be dating a couple of renowned stars.

In 2012, there were rumors that she was in a romantic relationship with American actor Rami Malek. The talks originated after the two worked together in the fifth installment of The Twilight Saga film series, The Twilight Saga: Breaking Dawn – Part 2.

In that movie, Malek portrayed the role of an Egyptian vampire, Benjamin, and Sarafyan played the role of Benjamin’s love interest Tia. Their chemistry within the film and during its promotion was amazing.

Additionally, there were pictures of the co-stars holding each other hands. All of that ultimately led people to speculate that they were dating each other. So, were the rumors true?

Sadly, it seems like the speculations are not true. Sarafyan and Malek weren’t dating, and they were only good friends. Neither of them went on to confirm the rumors, and it eventually faded away. As of now, Malek is in a relationship with Lucy Boynton.

Years after her rumored relationship with Malek, in early 2018, Sarafyan was rumored to be dating another renowned personality, Nick Jonas. In March 2018, a source revealed to the US Magazine that Jonas “is definitely into her [Sarafyan].”

But, like last time, this rumor was also not confirmed. Later, the gossip got buried when Jonas married Indian actress Priyanka Chopra in December 2018.

Besides these two rumors, the Run & Gun actress hasn’t been linked to other people. Furthermore, there are no reports of her dating someone in the past and having an ex-boyfriend.

Considering all of that, it’s fair to say that Sarafyan has kept her love life details upto herself only – if she has a love interest now or had someone in the past. For now, she is relishing her singlehood and focusing on her career.

Posted on May 19, 2021May 19, 2021
Morgan Kohan is an uprising talent who is working day-night to make a name for herself in entertainment. To date, Kohan has made her...
Read More