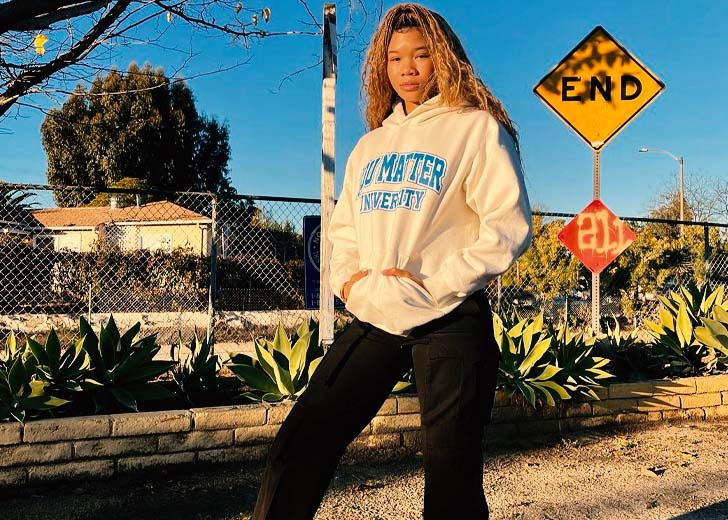 Storm Reid has taken the entertainment industry literally by storm through her acting performances. In short, she has already made a mark and achieved success in a short time.

She has been a part of several hit movies and TV shows in her acting career, including 12 Years a Slave, Twang, The Summoning, A Very Bad Day, A Wrinkle in Time, The Bravest Knight, and The Suicide Squad.

Furthermore, Reid has been making headlines for her portrayal of Zendaya’s sister Gia Bennett in HBO Max’s coming-of-age television show, Euphoria. In the show, Zendaya plays the role of Rue Bennett.

Here is everything you need to know about her, such as her age, parents, siblings, net worth, and more!

How old is Storm Reid?

As of this writing, Reid is 18 years of age. She celebrates her birthday on the 1st of July every year.

The actress celebrated her 18th birthday on July 1, 2021, in Mykonos. On the special occasion of her birthday, she launched her own swimsuit called ArashiBlu, in collaboration with pacsun.

Born in 2003, she was raised in the suburbs of Atlanta, Georgia. Additionally, her zodiac sign is Cancer.

Storm Reid’s parents were supportive of her acting dream

Reid was born to an African American family. Her father’s name is Robyn Simpson, and her mother’s name is Rodney Reid. Apart from her parents, she has three older siblings: one brother named Josh and two sisters named Iman and Paris.

Reid always wanted to become an actress since she was three-year-old. And her parents were always there to support her dreams. As per reports, the actress moved to Los Angeles to pursue acting with her mother and sister at the age of nine.

While she was with her mother, her father stayed behind in Atlanta with her two siblings. She Storm eventually made it big in the entertainment industry and now relishes healthy limelight.

In her June 2019 interview with Teen Vogue, she was asked how her family feels about her success. With a light-up face, she said, “They’re…they’re really proud of me. And that feels good.”

She continued, “My mom has always said, if I didn’t want to do it [acting] anymore then I could just quit, but I haven’t wanted to. I feel like that’s everyone’s outlook. As long as I’m happy, that’s what matters to them.”

Storm Reid has a tall height

For an 18-year-old, Reid – who weighs around 51 kg (112.5 lbs) – surely has a tall height. She stands at a towering height of 5 feet 7 inches or 1.7 meters. One of the main reasons behind her tall height might be that her father is also tall.

Although some might feel being tall is good, it was different with the actress. In her March 2018 interview with NPR, Reid mentioned that she feared being too tall as her dad and sisters are very tall.

“And they’re drop-dead gorgeous, but I just didn’t know if I, as Storm, wanted to be 6 feet tall, ’cause I feel like that’s pretty tall,” she further added.

However, her fear was cleared out when she had a conversation with renowned actress Oprah Winfrey on the sets of their 2018 movie A Wrinkle in Time. Reid told Bustle that when she opened up about this fear with Winfrey, she gave her a piece of advice.

Those words from Winfrey helped Reid with her fear and other things as she applied the advice on movie sets and her life.

How much is Storm Reid’s net worth?

The Euphoria star has been a part of several movies and TV shows in a short time. While some of them aren’t a big project, some are. So, it must be sure that she received a healthy sum from all of her gigs.

So, what is her net worth? As of this writing, there is no official data of her net worth. Nonetheless, reports suggest that her net worth might be somewhere around $600,000 – $1 million.