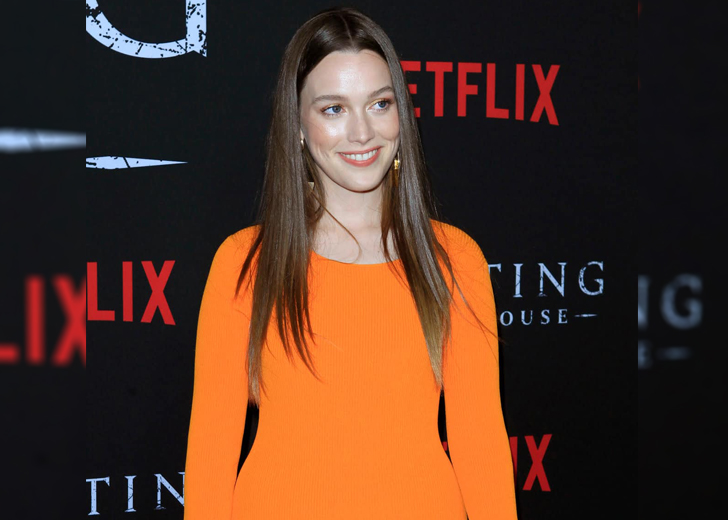 Victoria Pedretti is an American actress who has made a name for herself through her portrayal of disturbed and villainous characters. She was recently seen as Love Quinn in the third season of the Netflix hit show, You.

In addition, she has garnered fame for her performances in movies and TV shows such as The Haunting of Hill House, Once Upon a Time… In Hollywood, and The Haunting of Bly Manor.

For her performance in The Haunting of Bly Manor, Pedretti won an MTV Movie & TV Award and was nominated for one Critics’ Choice Award and Gold Derby Award, respectively.

Following her rise to fame, people from around the world became keen to learn more about her, including if she is presently dating a boyfriend or not.

Victoria Pedretti Is Rumored to Be Dating Dylan Arnold

The 26-year-old actress is currently rumored to be in a relationship with her You co-star, Dylan Arnold.

The talks of them being in a relationship started after the viewers of the Netflix show witnessed Pedretti’s character, Love, engage in an extra-marital affair with Arnold’s character, a 19-year-old college boy named Theo Engler, in the third season of You.

Later, the Instagram handle of the online outlet, Journal, reported on Sunday, October 24, that Pedretti and Arnold are dating in real life, as per their sources.

The handle had posted a collage picture of the co-stars, with the caption, “Hey YOU – sources are claiming that Victoria Pedretti and Dylan Arnold are dating! And don’t worry, he’s actually OLDER than her IRL.”

However, despite the outlet’s claim on Instagram, they had not provided any links to an article with additional information. Similarly, neither Pedretti nor Arnold has confirmed or denied these rumors.

Both of them have been very private about their dating life and rarely hint at whom they might be dating. Furthermore, paparazzi are yet to spot the two together, spending quality time.

While the fans have been hoping for the rumors to be true, they will have to wait for some more time until one of them address the topic. Till then, the rumors stay as it is.

Presently, there is not much information to claim Pedretti’s relationship status. As mentioned earlier, she prefers to keep her personal life details up to herself only.

In addition, there is not much information that can be extracted from her social media handles. That’s because she is not much active on social media. For instance, despite having over 1.7 million followers on Instagram, she has only posted once, that too related to her career.

The Bucks County, Pennsylvania native has not walked down the red carpet with any significant other and is yet to be caught by the paparazzi with a partner.

With all of the privacy surrounding her personal life, it is unknown if Pedretti’s had a boyfriend in the past or not. Furthermore, her present relationship status also remains unknown.

On the other hand, it might also be possible that the actress is single and not focused on dating. She is a rising actress who gained prominence after 2018, with only 11 acting credits to her name.

Perhaps, she is making sure to have a flourishing career before getting into a relationship. At present, Pedretti is busy filming her upcoming movie titled Lucky, in which she will portray the role of Alice Sebold.