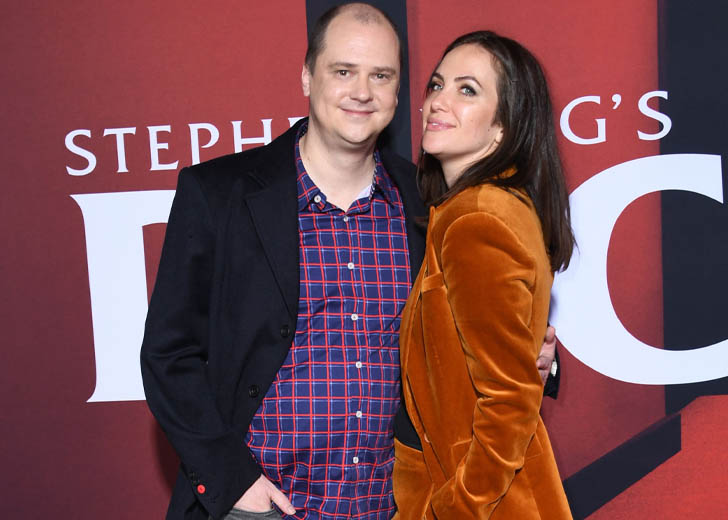 American actress Kate Siegel has been married to her filmmaker husband Mike Flanagan for more than five years now — married on February 6, 2016.

And while their marital relationship has ticked over five years, their professional relationship goes way back. The married duo has been working together for almost nine years now, ever since they first worked in the 2013 movie Oculus.

In most of the works they have done together — Siegel as an actress and Flanagan as a director — the audience can easily find one constant thing, which is that they love to make horror movies and scare the audiences.

Even though the two have scared the bejeezus out of the audience, their children, who are 5 years old and younger, don’t have the slightest clue that “Mommy and Daddy go to work and just murder everyone you love.”

The husband-wife duo’s latest collaboration is Netflix’s drama-horror-mystery series Midnight Mass. In this show, too, the couple has continued their tradition. And, after years of close exposure to these acting projects, Siegel considers her husband a horror “genius.”

Here is a look at Kate Siegel and her husband Mike Flanagan’s works together, up until this point.

The 2013 movie Oculus was the second time that the American actress had met her future filmmaker husband — the first time was during an audition for Flanagan’s movie which didn’t happen.

The rated-R horror-mystery movie was directed by Flanagan and in it, Siegel portrayed the role of Marisol Chavez.

Siegel was selected to play the role after the originally hired actress injured herself. While speaking of her casting to the movie, she said to Entertainment Weekly, “He [Flanagan] was like, ‘It’s a huge part of the movie, and I really want to work with you. I’ll keep you in mind for other things if you’re willing to come to hang out with us in Alabama for eight weeks.’ I was like, ‘Sure!'” It’s a promise he kept.”

As for the movie itself, its official synopsis is, “A woman tries to exonerate her brother, who was convicted of murder, by proving that the crime was committed by a supernatural phenomenon.”

The 2016 movie Hush is another rated-R movie in which the husband-wife duo had worked together and the first after Oculus.

Sometime after they had worked together in Oculus, Siegel and Flanagan began dating each other and they started to help each other in several of their professional works, such as preparing for auditions and reading through scripts.

During one of their conversations, they developed an idea to create a movie, which ended up being Hush. The movie is about Maddie, “A deaf and mute writer who retreated into the woods to live a solitary life must fight for her life in silence when a masked killer appears at her window.”

Ouija: Origin of Evil is the first PG-13 movie that the couple had worked in together. This movie was directed by Flanagan and was written by Flanagan, Jeff Howard, and Juliet Snowden.

The official synopsis of the movie is, “In 1967 Los Angeles, a widowed mother and her daughters add a new stunt to bolster their seance scam business by inviting an evil presence into their home, not realizing how dangerous it is.”

In this movie, Siegel played a minor role of a character named Jenny Browning, a “skeptical daughter of Mr. Browning who gets a scare when she’s revealed to be after her father’s money.”

Speaking of her role in the movie, the actress mentioned that she had never been a blonde before and it was the first that she had dyed her hair for a role. She adds, “I think that movie is a joy, but the thing I remember the most is how much fun I had being a blonde.”

Just around a year after Ouija: Origin of Evil was released, a new movie in which Siegel and Flanagan had come up. It was titled Gerald’s Game, a Netflix drama-horror-thriller movie.

Flanagan directed the movie and it was co-written by Flanagan, Jeff Howard, and Stephen King (based on the novel by).

In this movie, Siegel portrayed the role of Sally, the mother of actress Carla Gugino’s character, Jessie, who sees her mother in her hallucinations and memories.

Fun fact: During the filming of her part, Siegel was nine months pregnant and was “very uncomfortable” due to nausea. She says, “I remember saying early on to Mike, ‘Don’t glam me up. I want the frizzy hair. I want to be glowing and sweating. I don’t want any of this pretend-glorifying-of-motherhood B.S.’ Then I’m watching the movie and going, ‘What was I thinking?!’”

The Haunting of Hill House is a Netflix horror-mystery mini-series created by Flanagan. In this movie, Siegel portrayed the role of Theodora Crain, the “daughter of the Crain family with a psychic affinity that activates through touch.”

The actress loved her character, Theodora, in the show so much that she named her daughter after it.

The series was an instant hit as it garnered viewers from across the world. This led to Flanagan receiving a multi-year deal with Netflix.

The official synopsis of the show is, “Flashing between past and present, a fractured family confronts haunting memories of their old home and the terrifying events that drove them from it.”

Following the huge success of The Haunting of Hill House, Flanagan and his work-partner, Macy, once again took their turn into making another anthology series. The mini-series was titled The Haunting of Bly Manor and it was distributed by Netflix.

While Flanagan served as the creator of the show, this time he only directed one episode of the show. In this one, Siegel also had a limited appearance, in two episodes to be precise — played the role of Viola.

As Flanagan wasn’t heavily involved much in this one – as a director – unlike other of his projects, Siegel felt “sheltered” and she enjoyed the activity of working together with other talents, as per the actress.

Her scenes were directed by Axelle Carolyn. Recalling her time with Carolyn, Siegel said, “When we were going through all of these [scenes] — ‘She would wake. She would walk. She would sleep.’”

She continues, “[Axelle] would say, ‘In this one, I want it to be like this.’ And she would pull up an image of Dracula from long ago. Having that kind of visual representation of what she was trying to get was so inspiring to me. It made me want to collaborate more with her.”

Midnight Mass is another Netflix project in which the married couple has worked together, which premiered on September 24, 2021. This is also a horror-mystery series that is created as well as directed by Flanagan.

In this one, Siegel portrayed one of the lead roles of Erin Greene, a woman who lives on the isolated Crockett Island. The synopsis is, “An isolated island community experiences miraculous events – and frightening omens – after the arrival of a charismatic, mysterious young priest.”

Siegel is quite familiar with the story of this show as her husband has been trying to make it for years. In the movie Hush, Siegel’s character had written a best-selling book titled Midnight Mass. And, if looked clearly, the same Midnight Mass book has also popped up as an Easter egg in Gerald’s Game.

Speaking of these easter eggs, Siegel said, “It’s come in so many different forms. It was a movie, it was a novel, it was a series. So, yeah, I knew the story, but that was before it went through the [show’s] writer’s room. The writers added so much to this story,” Siegel continues. “They took what was a wonderful idea and turned it into an exquisite masterpiece.”