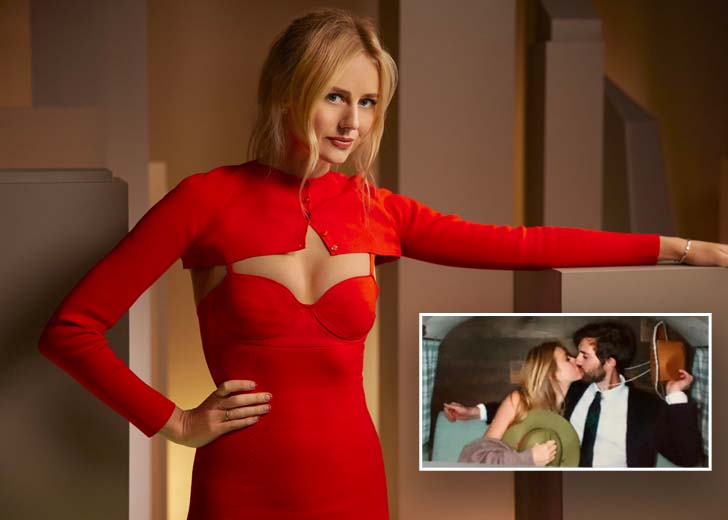 Justine Lupe, an American actress, lives in the heart of millions while astounding the world with her impeccable performances on-screen.

Frances Ha, Ex-Girlfriends, and The Recorder are a few of her most talked-about acts. Her off-screen life is as thrilling and dazzling as she carries on-screen.

The actress is not just paving the path of success in her professional track but is also prospering while keeping her personal life together and collective.

This beautiful actress had once made a revelation about how she crushed Pride and Prejudice star Matthew Macfadyen when she was little. He used to be her ideal type, so now what people are curious about is if the actress found a guy of her kind in reality.

Who is Justine Lupe dating?

Lupe has reportedly found her ideal type. She has a partner with whom she has bonded romantically.

However, it is pretty not sure how long they have been dating. The actress suddenly revealed the news with an adorable picture posted on her Instagram wall on February 25, 2021.

From the posts, it was pretty sure that the guy in there was her boyfriend, as there were pictures of them locking lips and looking stunning together.

Her Instagram revealed her boyfriend to be Germain Gulick, and the pictures would melt anybody’s heart.

Lupe took those pictures on Instagram while marking his surprise presence. She captioned, “Happily belated to my [heart emoji]. You are the warmest nook.”

The initial picture flaunts the casual look of the couple. At the same time, the second picture shows their lip lock and goofy polaroid. How cute is that?

Lupe made the official revelation of her boyfriend after keeping her audience engaged in the mystery for a certain period. A few months before she made things official, she made a post with her dog where she captioned, “One long year since we adopted this Lil champ. I love you, Pocket.”

Here, the term “we” was intriguing to the audience. However, the actress revealed things afterward, and the couple is still going strong and lovely together. But, the fact that still keeps people quenched with questions is regarding their first meeting and wedding.

Lupe’s partner in crime, Gulick, is a show business personality who does decent on TVs too. He might not be as famous as his better half, but he is good enough as a personality who has flourished on-screen to a certain extent.

He has also acted as a producer on six episodes of the TV series documentary Warriors of Liberty City while working on the project with LeBron James and Maverick Carter as executives.

The couple reportedly attended art schools, but not together or in the same university. However, both belonged to the same interest and field.

So far, their meeting has not been opened up, but many assume that the couple might have landed their eyes upon each other while they sought jobs in New York.

They might not have opened much regarding this aspect, but how they interact together reveals how comfortable and well-known they are to each other.

No news regarding their marriage has been articulated so far, but they would strike the internet if they came up with an announcement as such.

What Is Anne-Marie's Dating Status? Her Sexuality and Partner Discussed