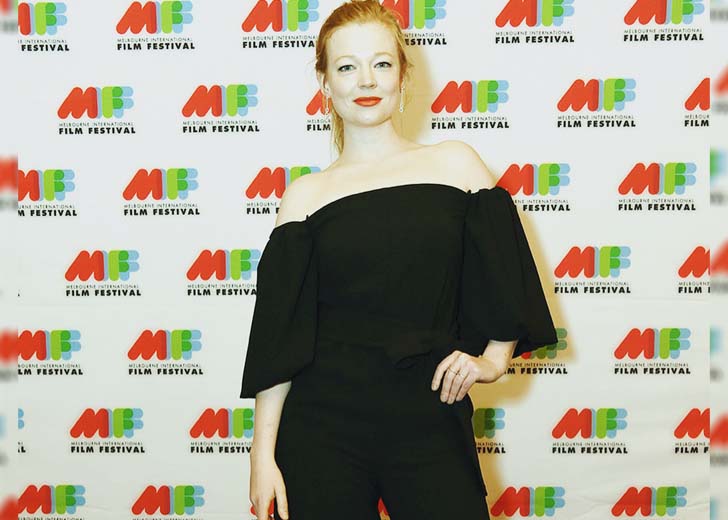 Sarah Snook is an Australian actress who has made it big in the entertainment industry thanks to her performances in movies and TV shows such as Spirited (2011), Not Suitable for Children (2012), Predestination (2014), The Beautiful Lie (2015), and Brothers’ Nest (2018).

Her popularity was boosted when she played the role of Shiv Roy in the TV series, Succession (2018-21). She has won several awards for her performance in it and received nominations for a Primetime Emmy, Gloden Globes award, and more.

Who Are Sarah Snook’s Parents?

Born on December 1, 1987, the Adelaide, South Australia native actress was raised as the youngest child of her parents. Her mother is an elder-care provider, and her father is a swimming-pool salesman — the names of her parents aren’t disclosed.

Apart from her parents, she has two older siblings, and both of them are sisters – names not disclosed. One of her sisters resides in Papua New Guinea, whereas another lives in London.

As of this writing, her parents are divorced. When her parents parted ways, her mother operated a boardinghouse just near the school her sisters attended.

Talking more of her family life to Vulture, in July 2019, Sarah mentioned that her maternal grandmother was originally from the UK and was an actress during the 1930s. During the start of World War II, she was stuck in South Africa, which resulted in her immigrating to New Zealand.

Later, when Sarah’s grandmother died in New Zealand, she had left money for her daughter [Sarah’s mother] so that she could travel the world. While traveling, Sarah’s mother ended up in Papua New Guinea, where she met her to-be-husband.

How Tall Is Sarah Snook?

Her other distinctive features are natural red hair, pale skin, blue eyes, and others. Furthermore, despite being Australian, she can easily speak in multiple accents.

Sarah Snook Has a Healthy Net Worth

Since making her acting debut in 2009, Snook has always looked forward and continued to make decent progress in her career.

Presently, she has 38 acting credits to her IMDb profile, including her one upcoming gig titled Run Rabbit Run. Through her skills, she has managed to win the hearts of thousands of people worldwide.

However, fame isn’t the only thing she has earned, as she has also been making a healthy income to fulfill her needs. So, how much is her net worth?

Well, Celebrity Net Worth reports that Snook charges around $350,000 per episode, and her net worth is estimated to be $4 million.

Posted on August 29, 2021August 29, 2021
Angourie Rice is an Australian actress who has garnered quite the limelight thanks to her amazing acting performances. She is primarily known for her...
Read More