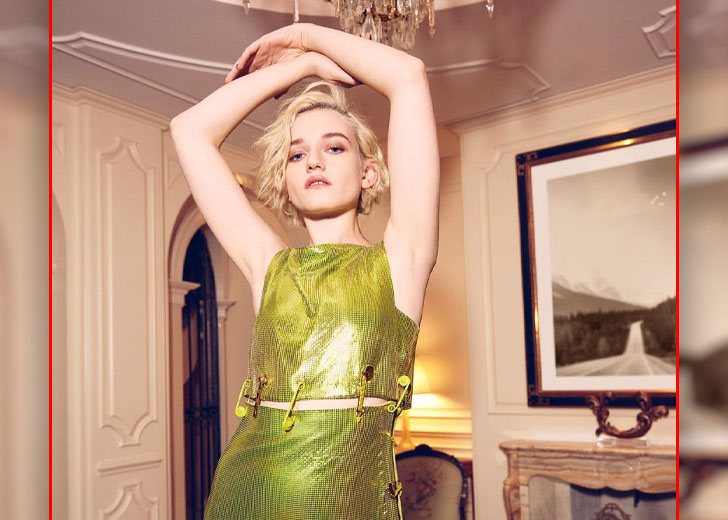 Julia Garner probably doesn’t need any introduction by now. It’s so because of the popularity she has been garnering through her recent works.

In 2022 only, she has starred in two of Netflix’s popular television shows: Ozark and Inventing Anna. In the former one, she plays a supporting character, Ruth Langmore, and in the latter one, she plays the title role of Anna.

Besides, for her performance in Ozark, which she has been doing since 2017, she went on to win two Primetime Emmy Awards for Outstanding Supporting Actress in a Drama Series in 2019 and 2020, respectively. She was also nominated for one Golden Globe Award.

Besides the two Netflix shows, Garner has gained fame for her roles in movies and TV series such as Martha Marcy May Marlene, The Perks of Being a Wallflower, Waco, and The Americans.

Garner is currently 28 years of age. She recently celebrated her 28th birthday on the 1st of February.

Born in 1994, she was raised in the Riverdale neighborhood of the Bronx in New York. Her zodiac sign is Aquarius.

As for her education, she reportedly went to Eagle Hill School for high school. Then, at 15, she began taking acting classes. Later, she enrolled at Indiana University for higher studies and graduated with a degree in psychology in 2015.

Garner was raised as the youngest child of her parents. Her father’s name is Thomas Garner, and her mother’s name is Tamara ‘Tami’ Gingold. While her father is originally from Ohio, her mother is from Israel – she is also Jewish.

Her father works as an art teacher and painter. Likewise, her mother is currently working as a therapist and used to be a comedian when she was in Israel. Apart from her parents, she has an older sister named Anna, an artist, writer, and producer by profession.

Julia was raised in a family where creativity and artistic expression were encouraged. But, as a child, she was shy and had problems with reading. In addition, she felt uncomfortable stringing together words. All of that resulted in a lack of confidence in her which hampered her in her teenage years.

Seeing their youngest daughter lack confidence and feel uncomfortable wasn’t easy for Julia’s parents. They did their absolute best to encourage their child and help her in any need possible. Her mother even took proactive measures to help her get over this stage.

At the age of 15, her mother enrolled Julia in acting class, hoping that it would help her with her difficulties. Thankfully, it did as Julia started being comfortable. She continued with acting, which became very fruitful and has taken her to a new height.

What is Julia Garner’s net worth?

Garner – whose height is 5 feet 5 inches – has come a long way since her debut in the entertainment industry. So, it must be evident that she has also garnered a healthy income with all the success.

Well, reports suggest that through her remarkable works in recent times, she has been earning a noteworthy salary. It’s also reported that she makes around $3 to $4 million for every ten episodes of Netflix’s Ozark.

Her acting income also joins her income from other endeavors such as modeling. So, how much is Julia Garner’s net worth? Celebrity Net Worth reports that her net worth is $3 million, which is remarkable for a 28-year-old actress.

Garner made her acting debut in 2010 with a small role in the short movie titled The Dreamer. After that, she appeared in one more short film before making her big-screen debut via 2011’s Martha Marcy May Marlene – played the role of Sarah.

From 2011 to 2018, she appeared in movies and TV shows such as Electrick Children, The Perks of Being a Wallflower, The Last Exorcism Part II, I Believe in Unicorns, Good Kids, The Get Down, Everything Beautiful Is Far Away, Waco, The Americans, and Maniac.

In between all the midst, Garner had auditioned and got the role of Ruth Langmore in Ozark. She started playing the role in 2017 and reprises it to date. She recently appeared in the first part of Ozark‘s season four, its last season. The second part airs on April 29, 2022.

Furthermore, the actress has one upcoming movie titled Apartment 7A, which is currently pre-production.