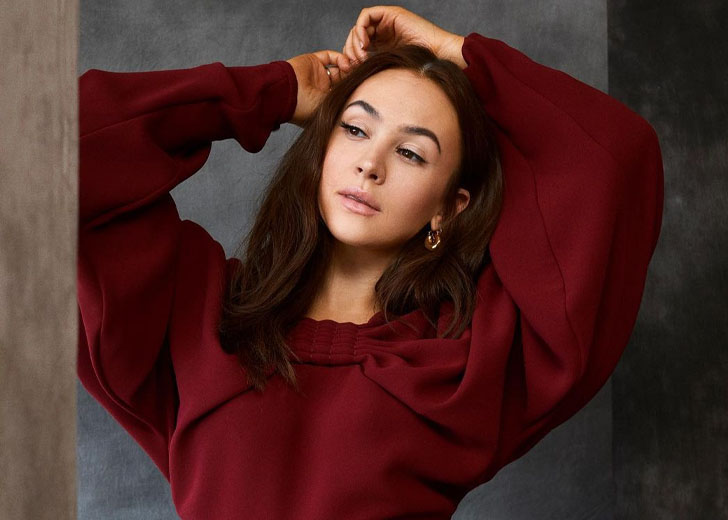 Eliza Butterworth is an uprising English actress best known for portraying the role of Queen Aelswith of Wessex – the wife of King Alfred the Great – in the historical drama television series titled The Last Kingdom.

She has been a part of the show since its initiation in 2015 and has played a key role. Due to the former reason, audiences have known the character and the actress playing the role for a long time.

And, the viewers have noticed quite a lot of change in her. There are some changes if we compare Butterworth in real life and her character in the Netflix show. One of that is she is only 28 years of age in real life but plays a much older role in the show – she even has grandchildren in the show.

Of course, we have to give credit to the production team for their amazing effort in the makeover, editing, effects, outfits, and many more things that led to such a young actress portraying a much older role.

However, that isn’t the only thing noticed by the viewers, as they also saw a loss in Butterworth’s weight. And surely, that might not be the production team’s work as the UK native actress has lost weight in real life as well.

If we look at Butterworth’s recent and old pictures, some major changes could be seen in her body. It could be noticed that the curve on her body and bigger jawline has slightly disappeared.

In one Reddit thread of The Last Kingdom, one user had even pointed out that Butterworth’s character of Aelswith “looked the oldest” in season one, and then “Eliza lost weight, and her face also changed.”

The changes in her body led some to wonder if she underwent the knife, i.e., a weight loss surgery – such as gastric bypass surgery or liposuction, or bariatric surgery – like several other celebrities have done in the past.

However, that doesn’t seem to be the case. First off, the rumors of her going through surgery for weight loss haven’t been confirmed. Secondly, The National Institutes of Health has previously set a rule for weight loss surgery.

The rule states that a patient willing to go for a weight loss surgery must have a body mass index (BMI) of 40 – which is regarded as morbid obesity – or weigh “more than 100 lbs over a patient’s ideal weight.”

A comparison of Eliza Butterworth before after weight loss (Photo: Married Wiki)

As for Butterworth, her weight is reported to be 58 kg or 127 lbs, and her BMI remains unknown. Nonetheless, it’s highly unlikely that she underwent surgery to lose weight.

While Butterworth might not have gone through surgery for weight loss, it seems the reduction in her weight might result from the regular workouts she has been doing for a while.

After going through her Instagram handle, it was found that she often pays a visit to the gym and does workouts. For instance, on February 9, 2020, she posted a picture alongside her friend after a workout session at Rea & Jaz’s All Ladies Bootcamp.

Similarly, a year before that, in May 2019, she had shared a few group pictures and mentioned that she was a part of the Flykick gym group in London. So, it means that she also does kickboxing.

Additionally, she has revealed that she took a five-weeks archery course in March 2020 for her role in The Last Kingdom. It’s further reported that she usually does her cardio sessions before moving into her weight training routine.

Butterworth – whose height is 5 feet 6 inches – might also be following a strict diet plan, calculating the calories she consumes and drinking a lot of water every day to lose weight and maintain a fit and healthy body.

Coming back to the original question, are Butterworth’s weight loss rumors true. Well, it seems like the speculations are true to some extent as there are some changes in her weight. However, it might not be true that she went through a weight loss surgery.