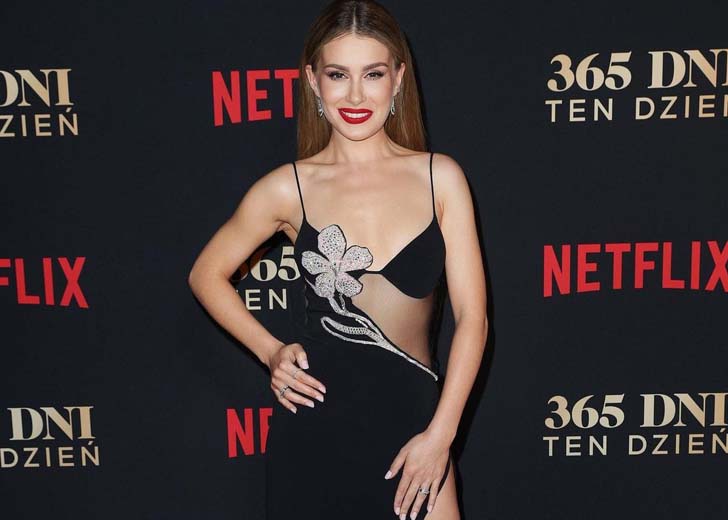 Anna-Maria Sieklucka is an uprising Polish actress who came into the limelight just a couple of years ago.

Sieklucka recently reprised the role once again in the sequel movie titled 365 Days: This Day. The movie’s filming had already been completed a while back, and it hit the global streaming platform, Netflix, on April 27, 2022.

With a newly released movie, Sieklucka’s popularity has again risen, with the audiences being keen to learn more about her personal life. Back when 365 Days was released, it was speculated that the actress might be dating her on-screen partner Morrone.

However, those rumors were proven to be false, and the two co-stars were only good friends. Instead, it was revealed that Sieklucka already had a partner, and she was keeping that detail hidden from everyone else.

Who is Anna-Maria Sieklucka dating?

Sieklucka is currently in a long-term relationship with her boyfriend named Łukasz Witt-Michałowski.

The couple first met each other while both of them were studying at the Wrocław-based Faculty of Puppetry of AST National Academy of Theatre Arts. The now-couple initially remained friends for years before taking any further steps.

Another thing that the two have in common is their birthplace or hometown. Both Sieklucka and Witt-Michałowski spent their childhood in the suburbs of Lublin, Poland.

Coming back to their relationship, they decided to take their friendship to another level — and started dating — around late 2018, as mentioned by the actress during one of her interviews in early 2020.

There were no pictures of them on their respective social media handles, that is, until April 2020. On April 6, 2020, the Twoja twarz brzmi znajomo actress featured her boyfriend for the first time on her Instagram handle.

While captioning the picture, she wrote this in the Polish language, “Jedno. Prywatne. I więcej nie będzie. Peace and love.” When translated into English, the Polish line says, “One. Private. And there will be no more.”

After publicly displaying a picture with her lover, Sieklucka has kept things private again and hasn’t posted anything with Witt-Michałowski since.

To conclude, the actress is in a relationship with her friend turned boyfriend — they are yet to get married. And it seems like the duo will be keeping their relationship private until they deem it fit to share details publicly.

Before this relationship got public, there had been no reports about Sieklucka’s past relationship. She has fairly kept her love life away from the sight of the media and public.

Who is Anna-Maria Sieklucka’s boyfriend?

As per reports, Witt-Michałowski received the Golden Badge for excellence in correctional labor from the hands of Poland’s Minister of Justice in 2009 for his contribution to called “Pod cel” theatre project, meaning Under the Cell in English – he presented the play “Lizystrata.”

The actor has appeared in other plays, including Stones in Pocket and Desert. Similarly, the plays he has directed include Aporia 43, Death Happy, and The Battle of Nangar Khel.

There are several more plays and acting projects that Witt-Michałowski has been a part of. And thanks to his flourishing career, he has managed to accumulate an estimated net worth of $500,000.