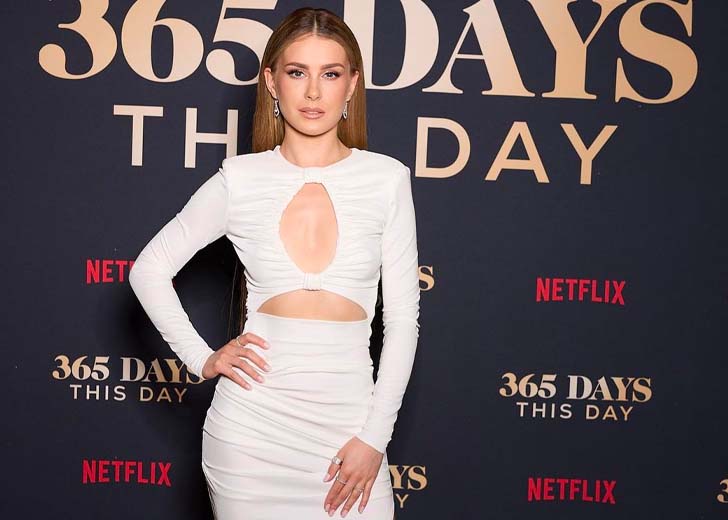 Anna-Maria Sieklucka is a well-known Polish actress, singer, and dancer best known for her role as Laura Biel in the Netflix film 365 Days. The hit film marks the 30-year-old actress’ film debut as previously, she had only worked in Polish TV shows and theater.

Having seen a new face on such a hit movie sequels, fans have been curious to know more about their favorite lead’s background.

So read along to learn more about the actress’s family, early life, ethnicity, and more.

Sieklucka was born on May 31, 1992, in Lublin, which is Poland’s largest city in the east. She attended Hetman Jan Zamoyski Secondary School and graduated in 2018 from the AST National Academy of Theatre Arts’ Faculty of Puppetry in Wroclaw.

She revealed that she enjoyed singing and dancing and also did ballet for ten years when she was younger. She is multilingual and is fluent in Polish, English, French, and German.

Jerzy Antoni Sieklucki, her father, is a lawyer. Joanna Sieklucka is her mother’s name, according to IMBD, and she also has a sibling, Piotr Sieklucki. Not much information is available about her mother and brother.

“My father is a man who is always there to support me. There are no situations in which I could not count on him,” the actress said in an English translation of an interview with Gala.pl [via Oprah Daily] in 2020.

“The fact that I had to play such a courageous role made no difference. Because he is proud of me, his reaction was positive.”

Anna-Maria Sieklucka talks about her childhood in Poland

In an exclusive interview with Barkha Arora, editor of High on Persona magazine, the actress discussed her childhood. She shared how she loved theater, travel, fashion, food, her childhood memories, and Hollywood plans.

The actress grew up in Poland along with her brother. She revealed that she was always interested in singing, dancing, and theatre — and had a passion for acting from a very young age.

The 365 Days star also disclosed that when she was in high school, she decided that instead of studying law, she wanted to be an actress. She got into drama school for the third time, and by the fourth year of her studies, her fascination with theatre had grown and lasted till now.

Before she landed her career-changing role in the Netflix movie, she was doing theatres in Poland. The actress stated, “During my journey, I have worked with many theatre productions, and by working in different forms only I got to learn and understand the form of art in a better way.”

She shares her experiences in the impromptu conversation with the host, saying, “In Poland, we have various types of theatre like drama, musical theatre, puppet theatre, comedy etc. Every type has a different repertoire with its own separate rules.”

Anna-Maria Sieklucka is not dating her co-star Michele Morrone

Despite many rumors, the sensual scenes, and on-screen chemistry, Sieklucka and Michele Morrone are not romantically involved. However, she is not single either.

Although the actress keeps her boyfriend, actor, and director, Łukasz Witt-Michalowski, relatively private and doesn’t share much information about her relationship, she did share one photo of him on Instagram back in 2020.

She wrote mainly in Polish which translates to “One. Private. There will be none more. Peace and love” The comments section, however, on this Instagram post was disabled.