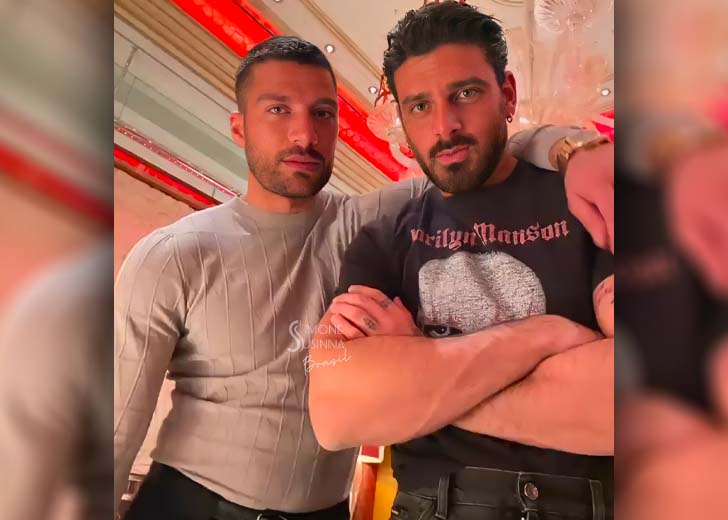 The rumors were initiated in June 2021.

Simone Susinna’s gay rumors have once again taken over the internet after the release of The Next 365 Days on Netflix on August 19, 2022.

*Spoiler Alert* In the third installment of Netflix’s 365 Days, Susinna’s Marcello ‘Nacho’ Matos and Michele Morrone’s Massimo Torricelli share an intimate scene in which the two characters kiss after sharing the bed.

As a result of this scene, people are again bringing up Susinna and Morrone’s gay romance rumors that initially circulated over a year ago, in June 2021.

On June 1, 2021, Morrone took to his Instagram handle to share a shirtless picture of himself in which a shirtless Susinna had wrapped his hands around Morrone’s neck. “I’m a liar,” he captioned the hot photo.

Moments after the photo was shared on the platform, it broke the internet, with thousands starting to search “Is Michele Morrone gay?” on google, some wondering if it was Morrone’s way of coming out, and more thinking if Susinna and Morrone were dating.

And it was obvious for people to think that as the post was made on the first day of Pride month. So, was there any truth behind people’s speculations? The answer is no. And the actor clarified the truth the following day after his team reached out to him about this gossip.

In his Instagram story, Morrone wrote, “This morning, I woke up with my team calling me and saying, ‘Hey, there’s a lot of articles…saying that you came out,’ because of the picture I took with Simone. He became a very good friend of mine, we’re like brothers.”

“We’re shooting a movie together. Guys, it was just a picture. Nothing more. And by the way… I’m a very big supporter of the LGBT community. But we’re just talking about a normal picture. I didn’t come out.”

After clarifying that he and Susinna are like brothers, he addressed the caption of his post. He wrote, “An actor is a kind of liar. That’s why I wrote that. Acting…someone who is not. I didn’t come out. So, I’m so sorry for the confusion.”

“As I said, I’m a big supporter of the LGBT community. There’s a lot of young guys and young girls…they would love to come out but they don’t do it because of their families. You know, happiness is priceless, guys. Peace and love, I love you so much,” he concluded.

So, that does it for these gay and romance rumors between Susinna and Morrone. As for their on-screen intimacy in The Next 365 Days, it’s just a part of the storyline set by the movie’s writers, and the co-stars don’t have a thing off-screen except for brotherly love.

As of this writing, Susinna is yet to get married to a wife. It also seems like he is single and doesn’t have a girlfriend, a thing that played a part in further fueling his gay rumors. However, the actor’s past dating life also proves he isn’t gay.

Per reports, Susinna was in a dating relationship with his now-former girlfriend, Mariana Rodriguez. They were together for one year, from 2016 to 2017. While dating, the two often flaunted pictures alongside each other and were quite open about their togetherness.

But it seems like their bond wasn’t meant to last forever, as they eventually called it quit in 2017 due to unknown reasons. Susinna was a rising star at that time, and their breakup didn’t gain media coverage.

After their split, Susinna was linked to Liza Makhu, an Italian model and actress. Their romance rumors started in 2020 after they worked on a project for a fashion company. However, those speculations were never confirmed or denied.

Who Are Anna-Maria Sieklucka's Parents? Inside Her Polish Roots