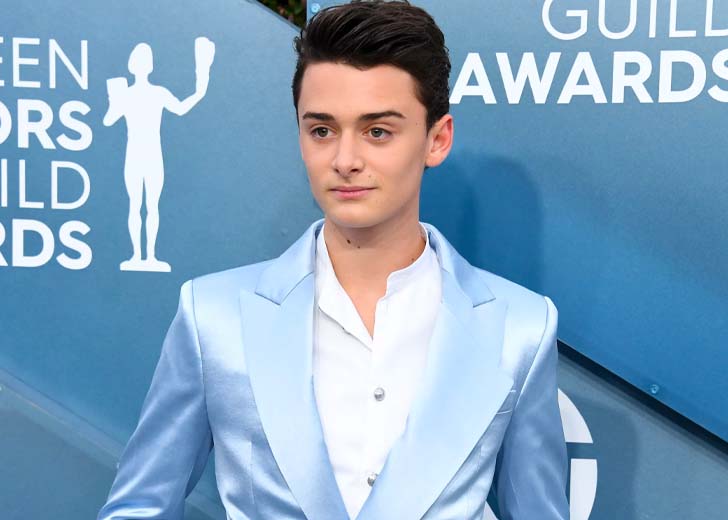 Many young stars have grown into an adult in front of the camera. One such person is Noah Schnapp.

Best known for playing Will Byers in Stranger Things, Schnapp started acting very young. As a result, people have seen his transformation from a young and shy child to a funny and handsome teenager before their very eyes.

And this included his growth spurt as well. Looking at Schnapp in Stranger Things, it is evident that his height and measurements have increased a lot.

In fact, it became a topic of discussion that many people got wrong —  including Wikipedia and IMDb.

So, how tall is Noah Schnapp? Here is everything we know about the young star’s height and measurements.

How tall is Noah Schnapp?

In fact, when replying to his fans on GQ’s Actually Me series on October 26, 2020, he reacted to his measurements as listed by IMDb. He said that he was 5ft 9 inches at the moment.

However, he revealed that he had recently gone to the doctor, who said he still had time to grow. He then replied to a comment on Quora, which asked if Schnapp would be taller than his co-star, Finn Wolfhard, in Season 4 of Stranger Things.

The Bridge of Spies star said that Wolfhard was tall and wished to be as tall as him. He added that he hoped to be around 6ft tall or even 5ft 11 inches so that he could “round it up.”

Schnapp is just 17 at the time of writing, so it seems like he still has time to grow. So, it is likely that his height and measurements may hike up in the future.

Schnapp, who celebrates his birthday every year on October 3, has been interested in acting since a young age.

His parents were initially apprehensive about allowing Schnapp to pursue a career in acting. But they quickly understood that athletics was not his calling.

Schnapp’s father told The Scarsdale Inquirer that sports were not his son’s interest. The actor’s parents eventually enrolled him in acting classes, where Schnapp found his true calling.

They auditioned four times each week for a whole year with no success. But eventually, Schnapp got his big break when he was ten as Tom Hank’s son in Bridge of Spies.

Since then, he has starred in many projects like The Peanuts Movie, We Only Know So Much, Hubie Halloween, Waiting for Anya, and of course, Stranger Things.

Schnapp is not just limited to movies and series. He is equally active on social media, especially TikTok, and has a massive fanbase.

As of 2022, the actor accumulated around 30 million followers on TikTok. Schnapp’s fame grew to the point that he was recognized more for his TikTok videos than for his acting.

Noah Schnapp has plans on continuing his education and going to college. (Source: Instagram)

Noah Schnapp may be a Hollywood hit and a TikTok celebrity, but he has no intention of abandoning his education. The actor told Digital Trends in 2022 that he intends to attend college.

In December 2021, he was accepted at the University of Pennsylvania, and he posted an adorable video reacting to his acceptance with his family.

In the video, which is set to OneRepublic’s 2013 song ‘I Lived,’ the actor, his twin sister, and his parents cheer and dance upon discovering the good news.

At just 17, Schnapp has grown so much and has transformed drastically. So, in the years to come, it is evident that he would continue to do —  surprising his fans and followers at every turn.