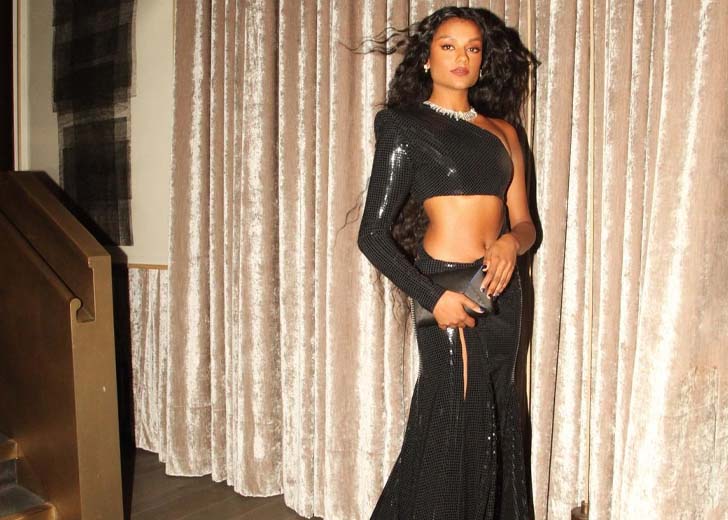 Simone Ashley has been on all of our minds since we started watching the new season of Bridgerton, which premiered on Friday, March 25.

The British actress is one of the new talents leading the Netflix show. She joins her younger sister Edwina in her search for a husband during the new London ball season as Kate Sharma (Kate Sheffield in the books).

Because of her independence, astounding natural beauty, and relationship with Anthony Bridgerton, the eldest of the Bridgerton family, all eyes are on Ashley.

Recently, on April 15, 2022, the Bridgerton actress shared her first working experience as a background role during her appearance on TheEllenShow, hosted by guest hosts Tiffany Haddish and tWitch.

She revealed that her first Hollywood gig in Straight Outta Compton was a wild experience. Even though she had a small role, she thoroughly loved the experience and was super excited.

Furthermore, Ashley shared that she was not sad at all for not getting the lead role as the shoot was done in a really massive mansion, and her experience was wild.

“I was cool with the working hours, and I was really grateful to be working there”, she added.

Not just that, she shared that she had done a few background roles before getting the lead role in the steamy historical series, Bridgerton.

During the TheEllenShow, Ashley and the hosts went on to talk about her working experience in the hit series, Bridgerton and explained her character, Kate Sharma, and the storyline in Bridgerton season 2.

In the particular interview on TheEllenShow, fans filled the comment section with much love and compassion for the actress.

“She can sing?? Cast her as a Disney princess ASAP!” a fan commented.

Furthermore, many people enjoyed the interview and watched Ashley share her experience.

Another fan commented saying, “This makes me so so so happy. I love Simone.”

All about Simone Ashley’s early life and family

Ashley was born in Woodstock, Oxfordshire, England, on March 30, 1995, to parents Latha and Gunasekharan. She was raised in a family of doctors and engineers.

Despite her academic background, she has always been interested in art since she was a child.

While her parents were supportive, Ashley also revealed that they weren’t always enthusiastic about her ambitions to be an actor.

“I was the only non-academic in my family,” Ashely told Vogue.

“Music, film, photography, and art were my fortes.” But she also found a love for entertainment at home. Ashley was also a big musical theater fan. She told People, “I grew up singing quite a lot and studied a lot of classical music, and then that kind of led into musical theater, and I fell in love with musicals.”

Her youth was surrounded by music, and her favorite artists include Fleetwood Mac, The Doors, The Rolling Stones, and Nina Simone.

Furthermore, She attended Maidenhead, England’s Redroofs School for the Performing Arts. Kate Winslet did her first acting apprenticeship at this same school for the record.

Let’s have a look at Simone Ashley’s career

She began her acting career in 2016 with roles in Wolfblood, Guilt, and Broadchurch, but it wasn’t until 2019 that she really took off, thanks to her appearance in Netflix’s popular series Sex Education.

In the series, she plays Olivia Hanan, a popular high school girl (a role that highlights her talent as an actress).

Ashley is now starring in the second season of Bridgerton as Kate Sharma. She has noticeable chemistry with co-star Jonathan Bailey, who plays Anthony Bridgerton in these new, long-awaited series episodes.