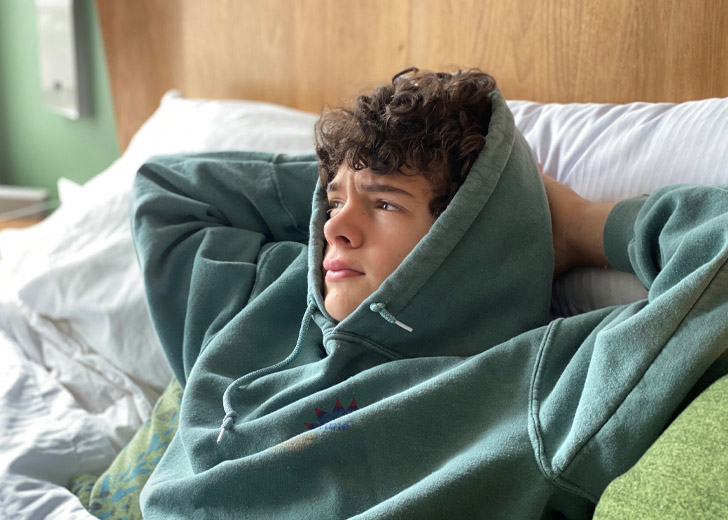 British actor Noah Jupe was born in fame as the first child of filmmaker Chris Jupe and actress Katy Cavanagh. But, he later went on to make a name by himself through his acting skills.

He first gained the limelight for his roles in The Night Manager (2016) and Houdini and Doyle (2016). His popularity brushed off the roof when he portrayed the role of Marcus Abbott in the Academy Award-nominated horror movie A Quiet Place (2018).

Here is everything we know about the child actor, including his age, height, personal life, and more!

How Old Is Noah Jupe?

Jupe is presently 16 years of age but will turn 17 in the next couple of months. He celebrates his birthday on 25th February every year.

Born in the year 2005, he was raised in the suburbs of Islington, London, England. His birth name is Noah Casford Jupe and his zodiac sign is Pisces.

As mentioned earlier, he is the son of Chris Jupe and Katy Cavanagh. Apart from his parents, he has two younger siblings; a sister named Jemma (b. 2007) and a brother named Jacobi (b. 2013).

How Tall Is Noah Jupe?

Jupe presently stands at an average height of 5 feet 1 inch or 1.55 meters and weighs around 45 kg or 99 lbs. But, as he grows up, the numbers will definitely change. His other distinctive features are a slimly built body, dark brown hair, hazel-colored big eyes, chiseled face, and more.

As of this writing, there have been no reports of the Suburbicon actor being gay. Similarly, Jupe himself hasn’t given out any hints of being gay. To conclude, Noah Jupe isn’t gay.

The talks of him being gay might have started due to his last three Instagram posts, in which he had featured the Shazam! actor Jack Dylan Grazer, who had publicly come out as bisexual in July 2021, via an Instagram live session.

However, the two are only together because of one reason — they both are sharing the screen in the upcoming movie, Dreamin’ Wild, which is presently in post-production.

Jupe prefers to keep his personal life matters away from his limelight and hasn’t shared anything on his love life. He only seems to use Instagram where he rarely shares any pictures there. So, his social media gallery hasn’t given any hints so far.

Additionally, no reports have arisen which states that he is dating a girlfriend or was dating one in the past. It looks like his present relationship status is single and he is giving all of his time and focus towards his acting career.

Following the footsteps of his actress mother, Jupe made his acting debut in 2015, landing a small role in the TV show, Penny Dreadful. In the same year, he appeared in two more acting gigs; A Song for Jenny and Downton Abbey.

In the next year, he played in two TV mini-series – The Night Manager and Houdini and Doyle – and one TV movie – The Last Dragonslayer – which provided him the much-needed boost in the entertainment industry.

His big break came in 2018 when he portrayed the role of Marcus Abbott in A Quiet Place, a movie that went on to earn several awards and nominations.

From 2019 to 2020, he appeared in movies and TV shows such as Honey Boy, Ford v Ferrari, A Quiet Place Part II, and The Undoing. In 2021, he only has one acting gig so far, that is the movie titled No Sudden Move.

As of now, he has three more upcoming movies; The Magician’s Elephant, Dreamin’ Wild, and The Lost Boys.

How Much Is Noah Jupe’s Net Worth?

Considering the big movies and shows Jupe has played in till now, he must have been paid handsomely. So, how much is his net worth? Well, Celebrity Net Worth reports that he has an estimated net worth of $2 million.