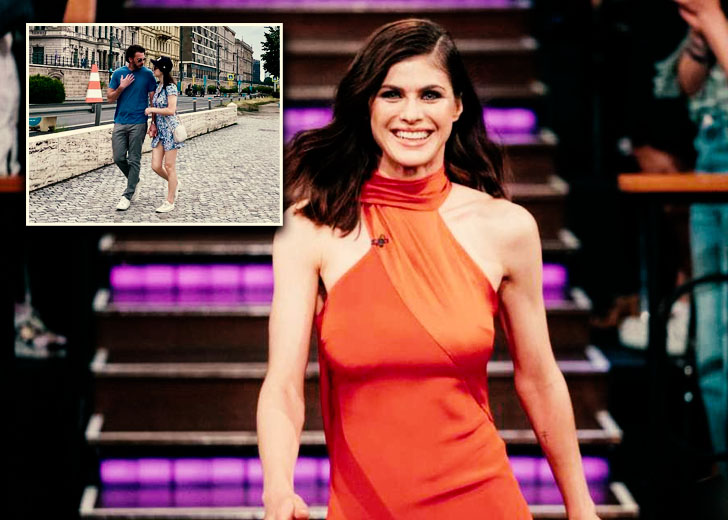 American actress Alexandra Daddario has earned a huge amount of limelight for her roles in the Percy Jackson film series (2010-13), Baywatch (2017), The White Lotus (2021).

As a renowned public figure, her professional life is crystal clear. But, what eagers the actress’s fans is her personal life. Some want to know if Alexandra Daddario is single, or married, or if she is lesbian/gay.

To reduce some of the questions, it is confirmed that the 35-year-old actress is not married and doesn’t have a husband. However, the actress is currently in a relationship with a man, clearing another question of whether she is lesbian/gay.

The Why Women Kill actress is currently in a romantic relationship with an American movie producer named Andrew Form. Form is known for his works in Friday the 13th (2009), Teenage Mutant Ninja Turtles (2014), and The Purge (2018-19).

Going into the details of their relationship, Daddario first teased about her boyfriend on May 5, 2020, when she shared the trailer of  A Quiet Place II, with the caption, “A Quiet Place II trailer…Very proud of my boyfriend and everyone else involved in this film- go check it out in theaters May 28th.”

She continued teasing in a couple of more Instagram posts and even posted a few pictures of/alongside him, without revealing his identity. A few weeks after sharing that trailer, on May 24, she officially confirmed her relationship with the producer.

She shared a black and white picture alongside Form, as they were sharing a kiss. In the caption, she wrote, “I love you…’and even that is an understatement.’”

Following the announcement, she has been quite open about her relationship, occasionally sharing pictures alongside her beau, where they could be seen visiting different places and enjoying their time together.

Furthermore, Form has even made some public appearances with his girlfriend. Recently, in July, the love birds were seen together at the red carpet event of ESPY Award.

Before engaging in a romantic relationship with his now-girlfriend, Daddario, Andrew Form was in a marital relationship. He had shared the wedding vows with the Fast & Furious actress Jordana Brewster.

Form and Brewster were married from 2007 to 2020. In their marital life, the now-divorced couple was blessed with two sons, Rowan and Julian Form-Brewster.

It is reported that Brewster was one of the first few people that liked Daddario’s announcement picture, in which she was sharing a kiss with Form. Well, it seems as if Brewster doesn’t have any problem with her ex-husband’s new relationship.

Speculations of Daddario’s past Relationships

While the girlfriend-boyfriend duo of Daddario and Form are relishing their time together, there have been a few instances where the American actress has been linked to another man in the past.

At the start, in 2014, the Golden Schmoes award-winning actress was reportedly dating a fellow actor named Logan Lerman. It is believed that they dated for a brief period and their relationship was private. Later, they ended their relationship privately too.

After that, she was rumored to be dating a baseball player named Ben Verlander. But, the rumors were never proven true. Later, around 2017, it was speculated that she was in a relationship with Zac Efron.

Daddario and Efron played each other’s love interests in the 2017’s movie titled Baywatch. Due to their amazing chemistry in the movie, fans were compelled to question “Is Alexandra Daddario dating Zac Efron?”

Upon knowing about the rumors, the actress cleared the air during her interview with E!. She told, “We work together closely; he’s my love interest in the film. I understand why people would go crazy over something like that, but Zac and I are very good friends.”

Although Daddario denied any kind of romantic relationship between her and Efron, the speculations continued. However, the gossips were put to rest when she was seen with Brendan Wallace, Emma Watson’s ex, in mid-2019.

The talks about the two dating each other emerged when they were spotted together in Los Angeles. Daddario and Wallace’s pictures from their trip to Italy further fueled the gossips. However, after that trip, they were never seen together.

The disappearance of Wallace in Daddario’s life led people to believe that they had parted ways. Afterward, the actress kept a low profile on her dating life, until she officially announced her togetherness with her current boyfriend Andrew Form.