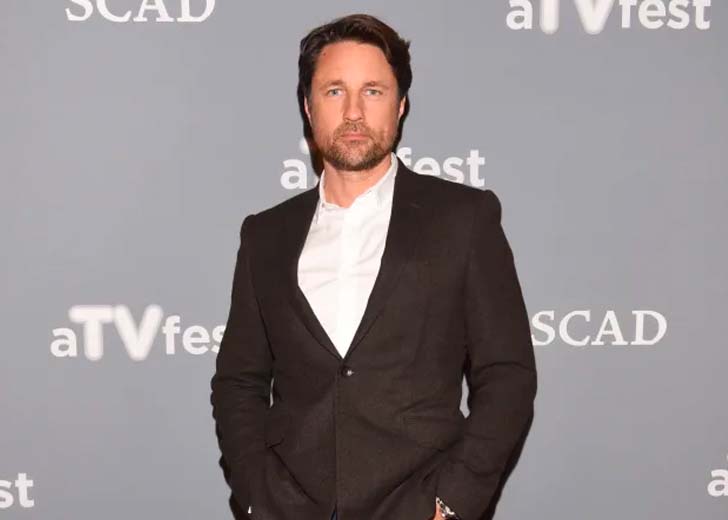 Besides his professional works, the actor has made quite a few headlines due to his personal life matters. And why would not he? as he has been linked to several women over the years, including some major Hollywood A-listers.

But what his fans are more eager to know about his present love life. So, the big question is: Did Martin Henderson get married? The answer is no — the actor is yet to share the wedding vows with anyone in his life. And the second question is:

Who is Martin Henderson in a relationship with?

Now that we’ve clarified that Henderson isn’t married let’s look and find out if he is currently dating anyone. And it seems like he is seeing someone at the moment.

As per Hello! Magazine on July 12, 2022, Henderson is presently in a romantic relationship with a fellow New Zealander. However, there are little to no details available about the actor’s new girlfriend, except that her name is Penny and she works as an interior designer.

The outlet further reported that it remains unknown when and where the couple first met, but they might be together since late 2021 or early 2022. They also mentioned that the love birds reside together on the Great Barrier Island.

Similarly, Hello! Magazine reported that the picture Henderson posted on Instagram was with Penny’s children. On June 29, 2022, the actor took to his Instagram handle to announce that he had fully recovered after being tested positive for COVID-19.

While announcing that, he had posted a picture in which he was driving a truck, a Can-Am defender XMR, down a muddy road. A small baby was sitting on his lap in the driver’s seat with two other children on the side: an almost teenage boy and probably a girl (could also be a boy).

Henderson’s newfound love is still in the early stages, but he seems to be enjoying some of the best times with his new girlfriend and her family. Besides, it was all Henderson ever wanted; a family and children, which he has mentioned multiple times in his interviews.

And perhaps, it was the same reason behind Henderson’s split with his now-former girlfriend, Aisha Mendez. The actor and the Mexican model seemingly began dating in January 2020 and often appeared on each other’s social media feeds.

They went Instagram official while quarantining together, and their bond seemed strong. Henderson had even taken Mendez to his native country, where they again quarantined together in a New Zealand hotel.

However, as sweet as it was, it seems like the two weren’t meant for each other, as they reportedly parted ways in early 2021. The reason behind their breakup is confusing, with some citing their age differences — Mendez was younger than Henderson.

Furthermore, some even mentioned that they split due to their differences in views. As per reports, the actor wanted to start a family with Mendez, whereas the model wasn’t ready yet to do so.

In July 2012, the Auckland native was speculated to be in a relationship with Hollywood star Demi Moore. The rumors initiated after they were seen grocery shopping and having lunch together in New Preston, Conn.

An eyewitness told Life & Style magazine, “They were very comfortable with each other.” But nothing was confirmed then. And in 2014, Henderson said to the Sunday Herald Sun that it wasn’t fun having paparazzi track his and Moore’s every move.

He said, “I feel for [Demi]. I feel for anybody who has that level of celebrity where you can’t lead a normal life.” Afterward, he told the outlet that he doesn’t care much regarding what other people perceive of his relationship with Moore.

“You’ve got to not care about what people think. You learn that as an actor. If you get a bad review, will you be destroyed by it? Or will you think you’re God’s gift when you get a rave review? I try not to invest time in what other people think of me,” he added.

On the other hand, Moore reportedly had a meltdown as her relationship with Henderson didn’t last long. However, it’s said that the actor wasn’t the reason behind her breakdown; instead, it was the situation.

At that time, Moore had just gotten off from her dating relationship with her then-boyfriend Ashton Kutcher, and sources said that the breakup had severely affected her self-esteem and confidence. And her split with Henderson further worsened things.

“The realization that she and Martin weren’t going to work just made Demi sink lower. She has almost given up hope that she’ll find love again,” one of Moore’s friends told Star in 2012.

As mentioned earlier, Henderson has been in several relationships. And the list is long, even if we exclude his dating relationship with his current girlfriend, Penny, and his other flings that we have discussed above.

The actor’s first relationship dates back to the mid-90s when he had a brief relationship with American actress Marnette Patterson. Similarly, in 1994, he briefly dated New Zealander model Nicky Watson for around two months.

Afterward, Henderson was linked to Aishwarya Rai Bachchan – Miss World 1994 pageant winner and Bollywood actress. The rumors started after they starred together in 2004’s Bride & Prejudice. However, the speculations were not true.

Instead, the two were only good friends. “I have a soft spot for her. It’s not because of her beauty, though she is very beautiful. She reminds me of an old-fashioned movie star. So glamorous,” Henderson told of Bachchan in one of his interviews.

Henderson’s romance rumors with Bachchan ended after people learned that the actor was dating Radha Mitchell. The former couple started dating in October 2005 and kept everything private, ending their togetherness in May 2006.

Fast forward to 2016, the New Zealander was reportedly dating Jennifer Garner. The talks of their romances came around a year after Garner and her then-husband, Ben Affleck, announced their intention to divorce in June 2015.

Henderson and Garner had just finished working together in the 2016 movie Miracles from Heaven, and the speculations were at an all-time high. Nonetheless, it all turned out to be rumors as the two were only good friends.

In 2017, the actor started dating Helen Randag – a movie producer and director. A cute instance of their togetherness was seen on September 17, 2017, when the actor shared a picture with his beau citing, “Out with my bae. I Love You, darling.”

Martin Henderson with his ex-girlfriend, Helen Randag, in North Hollywood in 2017 (Photo: Alamy)

The movie producer replied, “I love you too, my darling.” Their togetherness seemed strong, but it didn’t last long as they parted ways in 2020.

While he was still in that relationship, in 2019, there were rumors of him dating his Virgin River co-star Alexandra Breckenridge. Their chemistry as on-screen love interests was amazing, and fans hoped to be the same in real life.

However, that’s not true, as Henderson was with Randag then. Furthermore, Breckenridge is already married to her husband, Casey Hooper. They got married in 2015, and they now share two children named Billie and Jack.

JayDaYoungan's Killers Being Investigated after His Death in a Shooting Incident