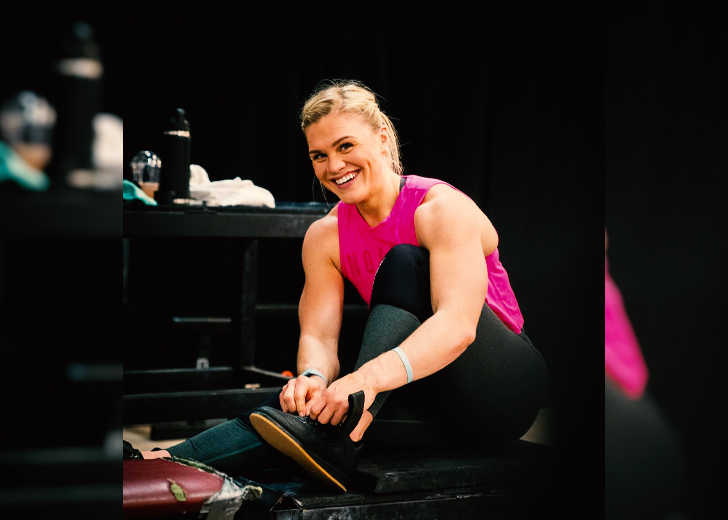 Katrín Davíðsdóttir [Katrin Davidsdottir] is a renowned Icelandic CrossFit athlete who tasted huge limelight when she won the CrossFit Games twice in continuous years, in 2015 and 2016 CrossFit Games respectively.

After doing so, she became the second woman to repeat such a thing, the first being her fellow Icelandic athlete Annie Thorisdottir who won the CrossFit Games in 2011 and 2012, respectively.

Davidsdottir is presently a nine-time CrossFit veteran and has already been named “Fittest Woman on Earth” twice till now. Here is everything you need to know about her!

How Old Is Katrin Davidsdottir?

A couple of days after her birthday, on May 13, she posted a series of pictures and some clips from her 28th birthday.

Born as Katrín Tanja Davíðsdóttir, she hails from the suburbs of Reykjavik, Iceland. She was born in the year 1993. As per her date of birth, her zodiac sign is Taurus.

As a native of Reykjavik, Iceland who spent most of her childhood there, the CrossFit athlete holds Icelandic nationality.

Going into the details of her parents, her father’s name is Dave Costin and her mother’s name is Odda Helgadóttir. Apart from her parents, she has two younger siblings, a brother named Jack Costin, age 25, and a sister named Hannah Davíðsdóttir, age 23.

Much like herself, her younger sister is also a CrossFit athlete. Katrin has a very close bond with all of her family members and the family’s togetherness can be clearly witnessed through her Instagram handle.

The CrossFit athlete has garnered a healthy fan following across different social media platforms. Currently, she is available on Instagram, Facebook, and Twitter, where she shares family-related pictures, travel & vacation-related pictures, fitness clips, and more.

On Instagram, she goes by the username of @katrintanja, where she has a fan following of over 1.8 million. On her self-titled Facebook page, she has gained over 420 thousand followers.

Compared to those numbers, the number of followers on her Twitter handle is relatively low as she only has 67.3 thousand followers there.

Katrin Davidsdottir stands at an average height of 5 feet 6 ½ inches or 1.69 meters and weighs around 70.76 kg or 156 lbs. As a CrossFit athlete, she has maintained an athletic build body.

Is Katrin Davidsdottir Married To a Husband or Dating?

The Icelandic athlete is yet to share the wedding vows and have a husband. However, she does have a boyfriend named Brooks Laich, a former Canadian Ice hockey player who is currently enjoying his time as an adventurer.

Currently, it is not disclosed where the two first met each other and since when they began dating. The very first time the talks of their togetherness started was when Laich posted a picture of the CrossFit athlete on July 29, 2021.

Following that, some pictures and clips of Davidsdottir followed in which he was seen supporting her during the 2021 CrossFit Games.

Likewise, the first time Davidsdottir shared a picture alongside her boyfriend was on August 9, 2021, from their vacation in Hawaii. A couple of more Instagram posts were followed in the next few days from their stay in Hawaii, in which the two were seen together.

One of the recent pictures of the couple was seen on August 23, when she shared a picture alongside her partner with a caption that reads, “Celebrating love with my love.”

Going by all of those, it is pretty much clear that the two are clearly in love and they have made their bond strong with love and support for each other.

Before this relationship, there are no reports of Davidsdottir dating someone else. On the other hand, Laich was previously married to the American actress Julianne Hough on July 8, 2017. On May 29, 2020, they announced their separation but reconciled around early September.

A couple of months later, on November 2, 2020, Hough filed for a divorce, ending their marital relationship.

Before joining CrossFit, Davidsdottir was a successful track-and-field athlete and trained for 10 years as a gymnast. Her journey as a CrossFit athlete started in 2012 when she came out second in Europe Regional. In that year’s CrossFit Games, she managed to secure 30th position only.

However, that blow only led her to work hard and prepare strongly for the next year. In 2016, she secured the 2nd position in Meridian Regional and went on to compete at the CrossFit Games. During the 2016 CrossFit Games, she overpowered everyone and won the tournament.

In the next year too, she first secured the 1st position in East Regional and then went on to win the CrossFit Games again, making her the second woman to do so. As the years passed, her performance in the Regionals and the CrossFit Games continued to improve, though she couldn’t come on top of everyone on every occasion.

In 2021, she competed at the CrossFit Open, CrossFit German Throwdown, and CrossFit Games and went on to secure 14th, 3rd, and 10th positions, respectively.

As her performance improved and her popularity rise, she began to receive sponsorship deals from different brands such as Reebok, Zevia, and others. Additionally, she has also received cash prizes after winning a particular tournament.

Considering all of that, it must be sure that her earnings are good and so is her net worth. So, how much is her net worth? Although the exact figures of her net worth are yet to be disclosed, it can be estimated that Katrin Davidsdottir might have a net worth of around $1 million – $2 million.