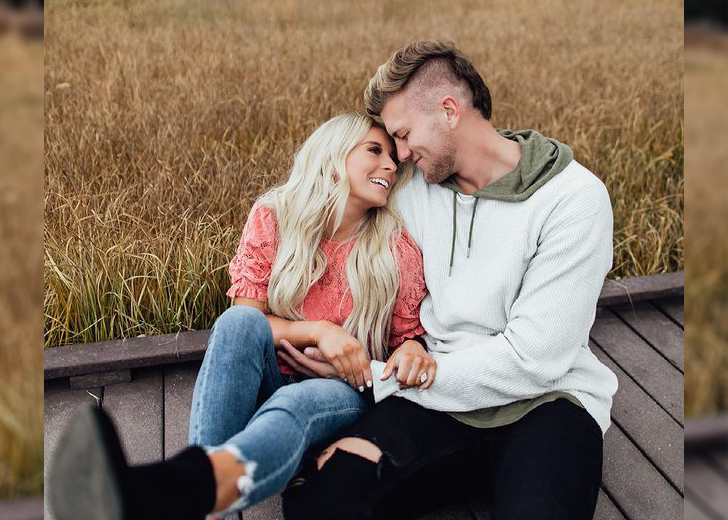 MyKayla Skinner is a retired American artistic gymnast who recently became the 2020 Olympic vault silver medalist. Following her achievement at the 2020 Tokyo Olympics, she retired on August 1, 2021.

As her performance as an individual as well as a national athlete continued to improve, people began to notice her and became eager to learn more about her. As her professional career was quite known, what they became more interested in was her personal life.

Mykayla Skinner Is a Married Woman

The Olympic silver medalist is currently in a blissful marital life with her long-time boyfriend turned husband, Jonas Harmer.

After dating each other for almost two years, on October 16, 2019, Harmer finally went down on his knees and proposed to Skinner. She said yes, and they got engaged. She also posted some pictures on Instagram to announce the news.

Two days after their engagement, on October 18, the athlete posted a picture alongside her fiance. Through the caption, she marked their wedding date. “Save the date 11-14-19,” was written on the caption.

The wedding preparations went underway. On November 14, 2019, they shared the wedding vows with their families, relatives, and close friends, witnessing the ceremony. The event took place in Gilbert, Arizona Temple.

After they officially became Mr. and Mrs. Harmer, the newly married duo went to Phuket, Thailand, for their honeymoon. Since then, they have been releasing the best of days of their life.

Both of them usually flaunts pictures of/alongside their better half with some short and sweet caption accompanying those pictures. Going by that, it definitely seems their togetherness has evolved over the years, and their bond has become stronger.

Skinner first met her spouse in Utah while she was studying at the University of Utah — Harmer studied at Brigham Young University in Utah.

They were attracted by each other, and following a couple of meets, they officially began dating on November 20, 2017.

Their togetherness was made public just some weeks later, when Skinner shared some snaps alongside him on December 6, 2017. The pictures were accompanied by a short caption that read, “He actually goes to BYU so if that first picture isn’t love I don’t know what is.”

Three days later, on December 9, Harmer also posted a picture alongside his now-wife on the occasion of her 21st birthday. After their relationship was made known amongst others, they began to share pictures alongside each other more often.

The pictures were of them from their vacations, short trips, birthday celebrations, small hangouts with friends, and so on. On November 20, 2018, they celebrated their first dating anniversary.

On that day, Skinner took to her Instagram handle to share a picture alongside Harmer and mention that how lucky she was that she found a man like him who “is so sweet, handsome, funny, charming, loving, and all of the above.”

Less than a year later, Harmer asked for her hand in marriage, and currently, they are a happily married couple. Soon, they will be moving back and settle down in Utah, as confirmed by Skinner’s Instagram post of January 1, 2021.

In it, she had mentioned that she and Harmer would be moving to Utah in 9 months, a place where their love story bloomed.

What Does Jonas Harmer Do for Job?

MyKayla Skinner’s husband, Jonas Harmer, is a digital creator and a YouTuber. From his Instagram bio, it is also found out that he is a Crypto trader and a sales manager for Vivint Smart Home.

Born in 1997, Jonas Harmer celebrates his birthday on the 14th of July every year. He recently celebrated his 24th birthday. As per his date of birth, his zodiac sign is Cancer.

Not much is known about his parents as the details are yet to be disclosed. Nonetheless, his Instagram disclosed that he has three siblings; a brother named Ben Harmer and two sisters named Madison Harmer and Ariel Harmer.