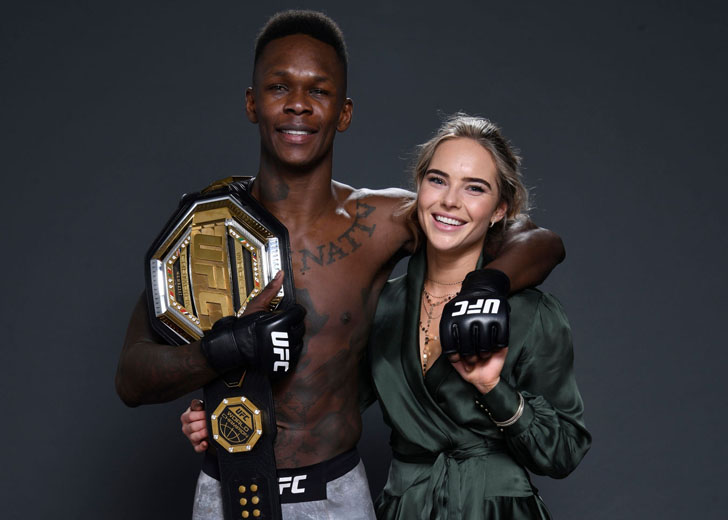 Nigerian-born New Zealand professional MMA fighter Israel Adesanya has earned a huge name as one of the best strikers in mixed martial arts. In his professional MMA career, he has made a record of 21-1-0 (win-loss-draw).

The UFC Middleweight Champion has earned such fame that his professional works don’t need to be described or put into words. However, what his fans are very eager to know is his love life.

The former kickboxer has not really given any hint on his romantic life, which has made the public more eager.

Is Adesanya Dating a Girlfriend Now?

The former AFC Middleweight Championship is very private when it comes to revealing his personal life details. To this date, he has rarely given any clue on whom he is dating.

Despite all the secrecy, there was once a rumor that Adesanya was in a relationship. The rumor began just ahead of the UFC 253, in September 2020, when the MMA fighter posted some clips of a mysterious girl on his Instagram stories.

This led his desperate fans to speculate that he is in a fresh relationship. However, they never got to identify the girl as Adesanya had cropped out her face.

The public only got to see the face of Adesanya’s girlfriend when the parent company, Zuffa LLC, posted a picture of them together. Later, they were seen sharing a bathtub together, which affirmed that they were together.

On November 21, 2020, he posted a picture of his alleged girlfriend on top of a hill or mountain, with just her back facing. The last sentence of the caption made his relationship further confirmed. It said, “Don’t ask me to do shit when I’m back in NZ for the summer…I’m busy!”

After Adesanya’s girlfriend name was not disclosed and she seemingly disappeared from the MMA fighter’s Instagram, it was rumored that they had broken up. But, as he has not confirmed his relationship, the speculations are just limited to gossips.

As Adesanya’s love life is filled with secrecy, some people have had speculated that the 6 feet 4 inches tall UFC fighter is gay. The other reasons behind the speculation were his hair color and dressing choice.

However, all the gay rumors stopped once the Lagos, Nigeria native fighter addressed the topic himself. He took to his Instagram story to post a picture of a comment section in which one person had written, “I honestly thought Izzy (Adesanya) was gay” another had replied, “same man that pink hair threw me off.”

In reply to that, Adesanya had written in the story that this type of comment comes every fight week, with the addition of bored and eye-rolling emojis.

The gossips also stopped when the fighter tweeted a picture, on December 30, 2020, alongside his friend and captioned it with “Ha! Gaaaaaayyee!!”

Furthermore, on the same day, he also posted a gif of ‘Trying to Figure Out Meme’ with a caption that said, “The internet tryna find out if I’m gay.”

Well, all of this, as well as the possibility of a girl’s presence in Adesanya’s life, clearly gives out only one possible outcome, that is Israel Adesanya is not gay.