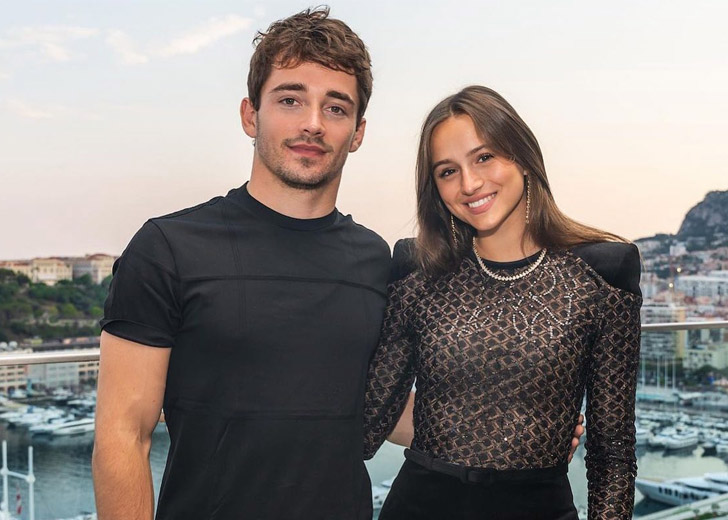 Charles Leclerc and Charlotte Sine were spotted on a luxury yacht in Sardinia on August 2022.

Charles Leclerc is a Monegasque racing driver who currently drives for Scuderia Ferrari in Formula One. He has been in a long-term relationship with Charlotte Sine.

Leclerc and Sine have been dating since 2019. Sine is a Monaco-born architect student and an Instagram influencer who occasionally models for brands. She shared the photo with Leclerc for the first time on December 29, 2019, at the mountain.

Sine’s father is the General Manager of the Monaco-based entertainment company Société des Bains de Mer. Similarly, the F1 Racer‘s girlfriend has her custom shoe brand, Sine Creations, which she designed herself.

Moreover, she sells beautiful handcrafted jewelry alongside her sister, Victoria. They have an Instagram page called secrettreasurecharms. Sine is also known to play the piano at times and is frequently accompanied by her boyfriend, Leclerc, as the couple uploads short snippets that fans adore.

Leclerc was previously in a relationship with Italian bombshell Giada Gianni — they began dating in 2015. But the two struggled to get along after some time as Leclerc’s primary focus was racing. So the couple called it quits, and after some time, Leclerc began looking for a new relationship.

Sine, who is reported to be a friend of Gianni’s, started dating Leclerc in late 2019 before making it official in December of the same year.

Are Charles Leclerc and Charlotte Sine still together?

As evidenced by Sine’s photos with Leclerc on her Instagram account, which she posted on October 3, 2022, the love birds are still together.

However, Leclerc doesn’t have many photos of his girlfriend on his social media handles. And it seems like he is keeping his love life a bit private after splitting up with his Italian girlfriend.

Returning to Leclerc and Sine, they were spotted on a luxury yacht in Sardinia in August 2022, where the racer put on a very romantic show with his girlfriend during a sun-soaked getaway.

The Formula One driver went shirtless in a pair of green psychedelic shorts. At the same time, his influencer partner flaunted her enviable figure in a skimpy blue bikini with white and orange squiggled stripes.

Sine quickly changed into a red two-piece with white polka dots while enjoying a romantic smooch in front of friends while soaking up the Italian sun from their luxury yacht in Porto Cervo.

As of 2022, Leclerc’s net worth is $12 million. He has amassed a sizable net worth at such a young age due to his hard work and dedication to his work.

Likewise, his meteoric rise in single-seater racing continued after 2014. He accelerated further in 2016 by winning the GP3 Series before dominating the 2017 FIA Formula 2 season.

Furthermore, after a strong debut season with the Alfa Romeo Sauber team, Leclerc was chosen to drive the new Ferrari SF 90 in 2019. He finished fourth in the World Championship after seven pole positions, ten podiums, and two victories, and Ferrari extended his contract until 2024.

Is Richard Armitage Married to a Wife? All You Need to Know