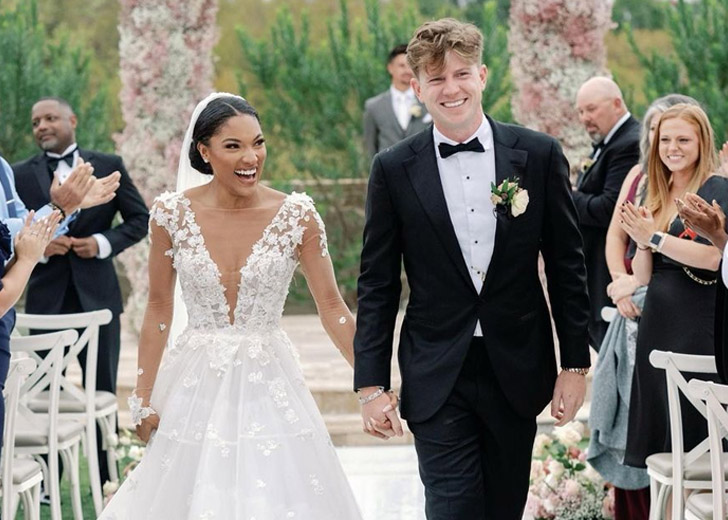 Hunter Woodhall’s relationship with his wife, Tara Davis, is one of a kind.

The pair first met each other and started dating when they were teenagers. It was love at first sight for them, and they knew they would get married to each other.

And now, within a matter of years, they got engaged and had a magical wedding ceremony. Now, they are enjoying their married life and successful career.

The Paralympic and Olympic athletes initially met during a track meet in 2017. The couple detailed the beginning of their romance in a YouTube video, and it’s just as charming and adorable —  just like a perfect rom-com movie.

The pair first met at an athletic competition and were immediately attracted to one other at first sight. Woodhall from Utah and Davis from California both attended the Simplot Games in Idaho when they were 16.

Woodhall noticed his current partner racing through the hurdles and told his best friend, “Damn, that girl is fine. I’m gonna marry that girl.”

On the other hand, Davis saw Woodhall stretching before his 400-meter event later in the day, and sparks sparked instantaneously. She reflected, “I just saw him and was like, ‘Ooh, who’s that?’ I kinda just stared at him for a little bit.”

Davis ensured the spark didn’t die after the track event ended with a hug and short talk. She slid into her partner’s Twitter DMs and began a flirtatious conversation.

Social interactions developed into phone numbers, and a few months down the line, their relationship began to take off. After months of long-distance communication and occasional meet-ups, the couple finally went on their first date in June 2017.

Davis traveled two hours to Woodhall’s training facility in Southern California, where they shared their first kiss. And they have been together since then.

However, their dating life was not all rainbows and butterflies. Since it was a long-distance relationship, they had a few ups and downs, which they overcame by learning how to communicate.

Woodhall told Elle, “We balance our long-distance relationship by having communication, trust, and patience.”  He added, “Over the past four years, we learned how to communicate and operate as a couple. We have had countless situations where we had done badly on both sides, but we learned from those lessons and genuinely want to grow our relationship.”

Woodhall and Davis announced their engagement on Instagram after he proposed to Davis in September 2021 over a romantic getaway to Cabo San Lucas, Mexico.

Woodhall proposed on the beach in front of a magnificent wooden altar filled with floral arrangements and macrame chandeliers. Before he dropped down on one knee in his beige suit, they sipped champagne.

Davis boldly displayed her emerald-cut diamond engagement ring via Instagram, which was the ideal complement to her plunging floral sundress. She wrote to her future husband, “You’ve showed me the true meaning of life, and now I get to spend the rest of my life with you. Let me reintroduce myself as a FIANCÉ.”

Woodhall also penned a lengthy message on his Instagram to his beloved future wife.

On October 16, 2022, Davis and Woodhall had their fairytale wedding. The pair tied the knot in D’Vine Grace Vineyard in McKinney, Texas, and exchanged the vows in front of 214 friends and family members.

Davis told People that she had talked about getting married since she started dating Woodhall. She said, “We truly saw each other for the rest of our lives, and this is just so surreal.”

Davis’ father accompanied her down the aisle after the couple’s seven bridesmaids and groomsmen — plus their two dogs, Milo and Winnie, who acted as ring bearers. Trenten Merrill, a teammate of Woodhall’s, performed the event, and the bride and groom exchanged traditional vows.

After dinner, guests danced in the courtyard under the lights until the night’s conclusion, when Woodhall and Davis made their big exit by stepping through sparklers and exiting in their Tesla with butterfly doors.

Will This Be Messi’s Last Chance at World Cup Glory?

Posted on November 18, 2022November 18, 2022
Last summer, Argentina ended a 28-year wait for a major international trophy when they won the Copa America tournament, beating rivals Brazil in the...
Read More