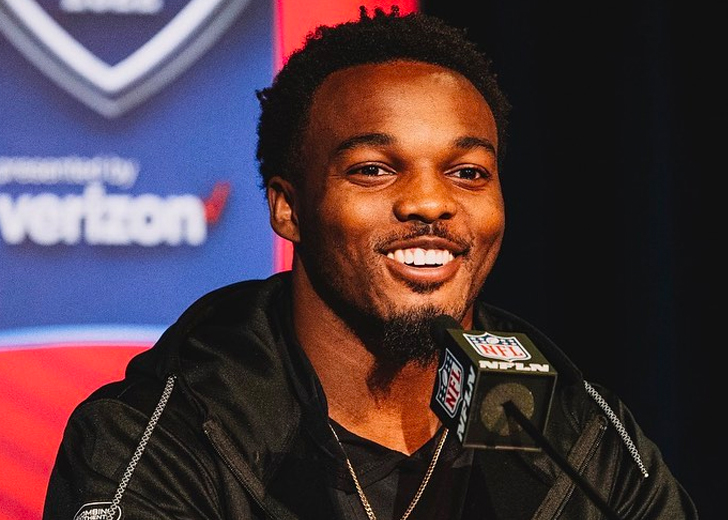 Nakobe Dean, an American football linebacker for the Philadelphia Eagles, seems to be single at the moment, but he is rumored to be dating a mysterious girl named Gabby.

The National Football League (NFL) player was seen with Gabby while taking a tour of the RWDC, which led to the relationship rumors.

However, the footballer has neither officially confirmed nor declined the rumors. Therefore, it is unclear if he is dating or hiding his relationship from the public eye.

Does Nakobe Dean Dating have a girlfriend?

American football linebacker Nakobe seems to be single at the moment. However, the internet suggests he is dating a girl named Gabby, but no information is available about her.

Nakobe has not made any statement regarding his dating life, so it is unknown if he is dating or keeping his relationship a secret.

According to the Celebrities Buzz, the pair took a tour of the RWDC, a biotechnology facility outside of Athens, along with his mother and ten local kids. Since then, Gabby, Nakobe’s alleged girlfriend, has never been brought up.

Bryon Dean and Neketta Dean welcomed Nakobe into the world on December 13, 2000, in Horn Lake, Mississippi. However, his parents separated from each other and got divorced.

Nakobe has stated that his mother, Neketta, who raised him, as well as his older brother and sister, are inspirations to him.

He is the middle child. He has an older brother, Nikolas Dean, who played tight end for the Ole Miss Rebels, and his younger sister is Brooklyn Dean.

The NFL player played high school football at Horn Lake High School. He got the Butkus prize in his senior year. After having offers from Ole Miss and Alabama, as a five-star recruit, he chose Georgia.

The footballer had 25 total tackles for the Georgia Bulldogs football team as a true freshman despite suffering from injuries.

In 2021, he received the Butkus Award, given annually to college football’s finest linebacker. He concluded the season as a vital part of the squad that won the 2022 College Football Playoff National Championship.

On January 15, 2022, Nakobe declared for the 2022 NFL Draft, and he received a pass to the NFL Scouting Combine in 2022. Due to a torn pectoral he sustained during preparation for the NFL Draft. He only engaged in a few positional exercises.

The Philadelphia Eagles selected Nakobe in the third round (83rd overall) of the 2022 NFL Draft. The NFL analyst Ian Rapoport noted that while his draft-day decline was unexpected, teams were reportedly worried about his stature and his choice to forego having surgery for a pectoral ailment.

In 2022, the Eagles linebacker was named Arthur Ashe Jr. Male Sports Scholar of the Year by Diverse: Issues In Higher Education.