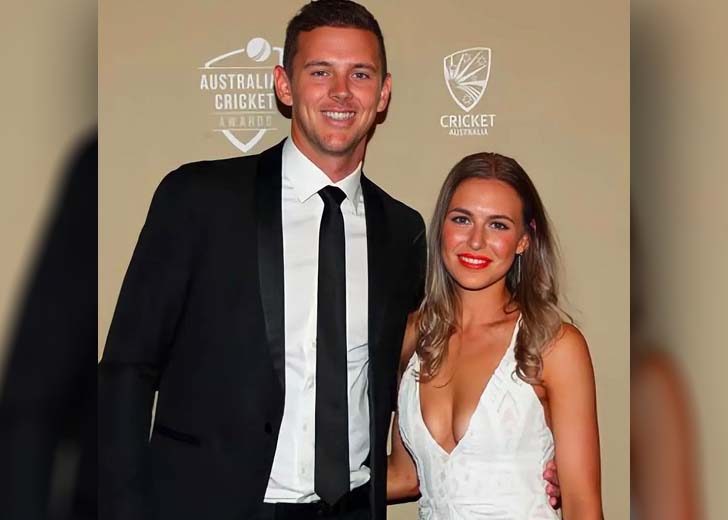 Josh Hazlewood is a cricketer from Australia and a tall pace bowler with a reputation for accuracy.

As a result, he has been widely acclaimed in the world of Cricket, with many international teams seeking him out. In the ICC Men’s Player Rankings, he is currently ranked second in ODIs, first in T20Is, and 12th in Tests.

Hazlewood has a lot of fans and followers. But it seems like his biggest fan is none other than his wife, Cherina Murphy Christian.

Hazlewood shares a private life with his partner. So not a lot is known about their marriage and dating life.

Here is everything we gathered on them.

As said before, there is little to no information about Hazlewood and Christian’s love story. Hazlewood does not have a social media presence, so there is no way of knowing his personal life.

On the other hand, Christian has Instagram with the handle @cmakeupartistry, but it is private. It seems like the couple enjoys keeping their personal life private and out of the public eye.

The pair allegedly dated for two years before getting engaged in 2019. Then, a year later, in December 2020, they tied the knot in Australia.

Their marriage ceremony was filled with their friends and family. Moreover, it was a star-studded wedding with many celebrities, especially cricketers, to bless the newlyweds.

Moises Henriques’s wife, Krista Thomas, took to Instagram to share a picture with the bride and groom in December 2020. She stood between Christian and Hazlewood, who was hiding a bottle of beer behind his back.

Hazlewood wore a classic black tuxedo with a white shirt and black bowtie. His partner donned a beautiful white off-shouldered gown with a sweetheart neckline.

She also wore a white hairband and earrings. Thomas captioned the picture, “In the words of Archie, “wooow, Chen-nee-nah! So boo-ful” ❤️ @cmakeupartistry. The best day for the best people xx.”

As of 2022, the pair seems to enjoy their married life. They do not have any children or baby at the time of writing.

Christian and Hazlewood have very different careers. Christian’s profession is that of a make-up artist.

Hazlewood is an athlete and one of the most sought-after cricketers. He was selected for New South Wales at 17, making him the state’s youngest paceman.

In November 2008, he made his first-class debut at the Sydney Cricket Ground against a visiting New Zealand side. On June 22, 2010, Hazlewood became Australia’s youngest One Day International debutant.

He is a right-arm fast bowler who has also played for Australia Under-19s and was the youngest member of Australia’s Under-19 World Cup squad in 2008.

Is Sam Richardson Married to a Wife? Inside 'HouseBroken' Star's Love Life