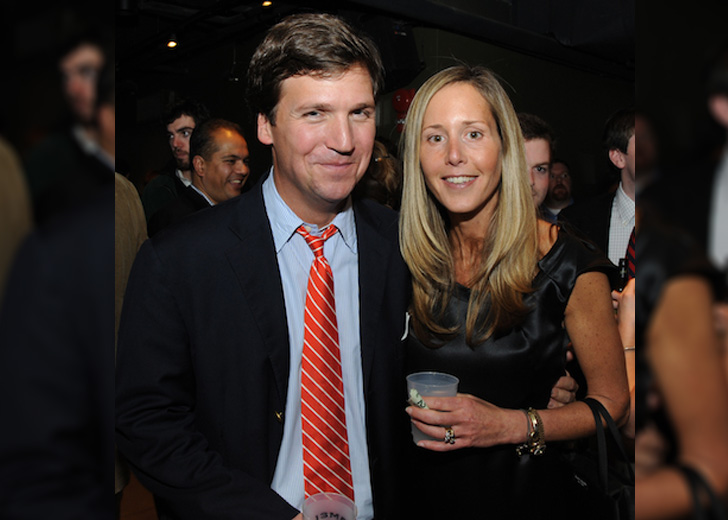 Tucker Carlson is a well-known American TV host and political commentator. Since 2016, he has been hosting the nightly political talk show Tucker Carlson Tonight on Fox News.

In addition, he is an author who has written several books, including The Long Slide, Ship of Fools, and Politicians, Partisans, and Parasites.

While he has reached the peak through his professional works, his personal life is also worth mentioning as it’s successful too. Carlson has been married to his wife, Susan ‘Andrews’ Thomson Carlson, for over three decades now.

As of this writing, there is little to no information available on Carlson’s wife. The television host has been very private when it comes to revealing details on his wife and marital life.

The reason behind his privacy might be due to his stance on several hot and controversial political topics, and he doesn’t want his wife affected by any of that.

Nonetheless, Carlson has revealed that his wife, Susan, is the daughter of his former headmaster. Furthermore, as per reports, she previously worked at Laurel, Maryland-based At Your Service Hospitality Management, LLC.

Carlson first met his now-wife back in his high school days, at St. George’s School in Rhode Island. As the author told People, “She was the cutest 10th-grader in America.”

Similarly, Andrews also told the outlet, “There was a bounce in his walk. He was in his khaki pants and ribbon belt and I thought, even then, he seemed so optimistic and positive.”

They eventually fell in love and began dating each other. However, dating each other was a little tough for them as Andrews’ father was the headmaster of the high school they studied in. Nonetheless, everything worked out.

Later, the two remained in a long-distance relationship as Carlson had to move to Hartford, Connecticut to study at Trinity College. Just six months before his graduation, he asked Andrews’s father for her hand in marriage.

Her father didn’t deny and on August 10, 1991, the high school sweethearts shared the wedding vows. “All very 19th-century. But a good thing to do,” he told People about his wedding.

Since their marriage, the couple has been inseparable than ever and has always shown love, care, and support for each other. Recently, Carlson and Andrews completed 30 years of their marriage.

The Married Duo Is Blessed with Four Kids

In their marital life, Carlson and his wife have been blessed with four children; Lillie, Buckley, Hopie, and Dorothy.

“He’s so imaginative with them,” Andrews told People about her husband who reads to the kids on a regular basis. In addition, on every 4th July, he teaches his children the “meaning of the Constitution by reading the Bill of Rights and setting off a firecracker as he recites each liberty.”

“It’s good not to take our freedoms for granted. Patriotism is so uncool, but they don’t know that,” Carlson told the outlet.