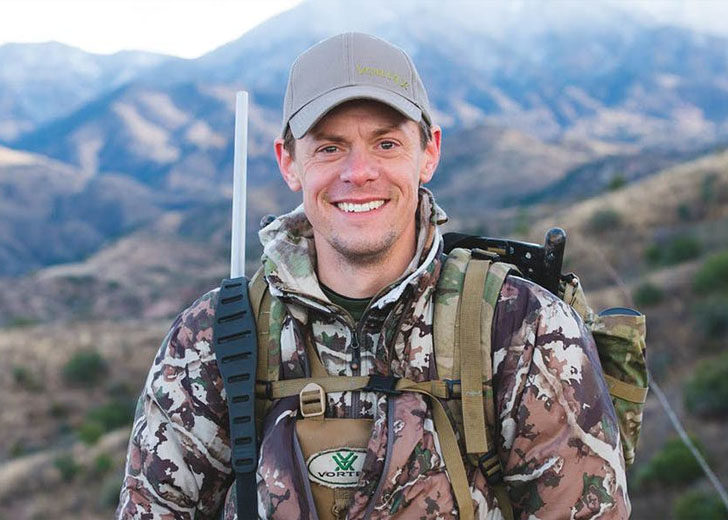 Steven Rinella is an American writer, outdoorsman, and TV personality who came into the limelight through his books and television career. He currently has written six books, all of them related to hunting and the outdoorsman lifestyle.

Coming over to his personal life, he is happily married to his long-time wife Catherine (Katie) Parlette Finch.

As Rinella has been an outdoorsman since his childhood, he had always assumed that his partner would be one too. He went on looking for the same type of partner when he was dating, however, none of it worked out.

His luck with women was so bad that he made a plan to settle down in his remote Alaskan cabin and “order a bride from a fishing village in Siberia and call it a lifetime.” But, that was when fate kicked in.

When he sold his first book in 2006, he went to New York City to celebrate the editor of Miramax Books, a publishing company that helped him publish his book. The editor had brought the company’s new director of publicity, Katie Finch, alongside her.

That was the first time Rinella met his future wife. Recalling the moment in his story with Glamour, he said, “While Katie claims to have had only one thought about me—that I was too brusque for TV—I couldn’t keep my eyes off her.”

“She wasn’t my type but she was intriguing. Her cheekbones reminded me of Cate Blanchett, and she processed everything I said with the caution of a CIA interrogator. I’d never met anyone like her,” he further added.

For the first year, most of his works went through Finch and he also kept everything professional with her. But, by the time he realized it, he had already fallen in love with her. “It occurred to me that I was falling for Katie only when I started trying to talk myself out of it, he said.

Finally, he asked Finch out and surprisingly she said yes. He bought a plane ticket to Los Angeles, California, and spent four days cruising along the coast with her. While everything they did at that time felt weird for Rinella, in the end, he realized that he had the time of his life.

“Being with her allowed me to stop focusing exclusively on what I wanted—and forced me to stop being so damn selfish. It was a great feeling, like someone had opened up the curtains and let the light in,” he told the outlet.

When he returned home, he was stunned, his world was flipped, he didn’t know what was going on. However, the one thing he knew was he wanted more of what he had just had and he wanted Finch. He even placed a 100 bucks bet with his friend saying he would marry her.

On their second date in New York, they moved in together. The two roamed all over the city and had a blast. Finch even took him to meet her parents. Later, she also went to his cabin in Alaska, made fun of his best hunting stories, and kissed him goodbye every time he went into the woods.

One night, when he was fully drunk, started a stupid fight, and made a big show while leaving the bar, Finch told him that if he ever walks out again, he would not be welcome back. This showed him an important thing about Finch and relationships.

“Being with her would be tough but worth it because she was willing to keep the same promises she asked me to make.”

The duo had bonded really well by that time and Rinella thought it was time to take another step forward. On one March night, in 2007, when he and Finch had just returned from a night out, he went down on his knees and popped the question.

She said yes and they got engaged. Sixteen months later, in July 2008, the two shared the wedding vows in Fennville, Michigan, amongst their close friends and family members.

Just a few days before the wedding, Rinella had received an envelope from his Alaskan friend with whom he had placed a 100 bucks bet. Inside the envelope, there was a crisp $100 bill. “It was the best bet I ever made,” he said.

After their wedding, the married couple went to Seychelles for their honeymoon. In the remote island paradise, they had a lot of fun — they went on bicycle rides, ate different types of food, and enjoyed each other’s company.

They happily reside in their own world, with a lot of love and affection for each other. And, even though Rinella doesn’t share much about his wife, due to his privacy, there is no denying that nothing much has changed between the married couple.

Steven Rinella and His Wife Are Parents of Three

The married duo of Rinella and Finch are the parents of three children; two sons named Jimmy and Matt and a daughter named Ross.

Jimmy is the eldest son, Matt is the middle child, and Ross is the youngest of three. The only thing known about the duo’s children is that their daughter was born on December 12, 2012, and one of their sons is 10 years of age.

Nonetheless, going by his Instagram gallery, it seems like all of his children are following the footsteps of their father and are interested in hunting. Rinella usually shares pictures of his kids fishing, going on hunts, and being an outdoorsman just like him.