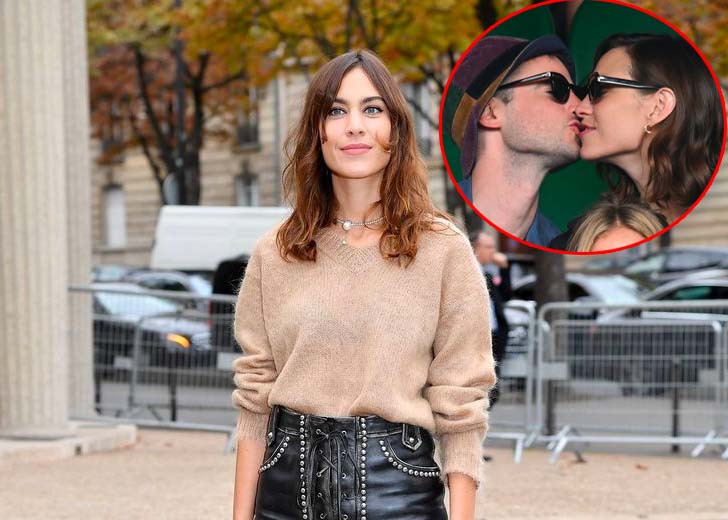 Tom Sturridge has made headlines a lot recently. His new show, The Sandman, based on DC Comics of the same name, was released on Netflix on August 5, 2022. Sturridge plays the titular character of Dream.

Since the show was released, Sturridge has been critically acclaimed by fans, followers, and critics. However, the actor has not just made it to the news from his new show.

Recently, he was photographed kissing Alexa Chung —  making everyone believe she was his girlfriend.

Sturridge recently joined in the footsteps of superstars who have made romantic debuts at Wimbledon. He and Chung posed for photos while enjoying the game.

The two could be seen laughing as they watched the Centre Court action and took selfies with one other. The pair shared a kiss, and the picture soon went viral on social media.

Interestingly, the pair were joined by Sturridge’s former girlfriend, baby mama Sienna Miller, and her current boyfriend, Oli Green. All four of them looked happy, and they were enjoying each other’s company.

This is not the first time Sturridge and Chung were photographed together. The pair were spotted together at Glastonbury 2022, with onlookers noticing them as they walked through the muddy field.

Neither party has commented on their relationship at the time of writing. This is understandable given that they are both very reserved when discussing their personal lives.

Kissing in front of the cameras during Wimbledon is a pretty big move to announce one’s relationship. However, until Sturridge and Chung confirm the relationship, nothing can be said for sure.

Who is Alexa Chung?

Alexa Chung is a jack of all trades. She is a British writer, model, blogger, fashion designer, and television presenter.

She was signed to a modeling agency after graduating high school and did not attend any university. Chung was discovered by Elite Model Management when she was 14.

However, she never worked with Elite. But later, she was discovered two years later at the Reading Festival by Storm Model Management, with whom she secured a contract.

Similarly, the model later starred in several music videos, including those by The Streets, Westlife, and Reuben. She was named the new face of Antipodium, a line sold at Harvey Nichols and Liberty in January 2008.

Alexa Chung is allegedly dating ‘The Sandman’ star Tom Sturridge after the two shared a kiss at Wimbledon. (Source: Instagram)

Chung wanted to start a career in TV from a young age. She had first auditioned at the age of 18 but had not been successful. But when Miquita Oliver and Simon Amstell departed Channel 4’s Popworld in 2006, Chung was asked to take their places.

Then, she started her journey on the silver screen. She soon signed an agreement with Channel 4, which was rumored to be worth £100,000 at the time.

She also featured on various programs as part of the contract, including 8 out of 10 Cats, Big Brother’s Big Mouth, T4 Holiday Mornings, T4 Movie Specials, T4 Music Specials, and providing coverage of the V and T in the Park festivals.

Chung was ranked 18th on Broadcast’s Hot 100 Talent list in 2007 and became one of the four main T4 hosts after June Sarpong left. She also hosted Vanity Lair, a 10-week reality program on modern ideas of beauty.

Sturridge and Miller’s relationship is one of a kind. Their romantic relationship lasted from 2011 to 2015 for four years.

But even though Sturridge and his former girlfriend parted ways, they are still best of friends and an ideal parent for their daughter.

The former couple, who have a daughter, Marlowe, knows they are unconventional ex-couples. They often raise heads when they walk the red carpet, like at the 2021 Tony Awards, or spend time together.

Moreover, they frequently stay at one other’s homes and travel together. To date, they have not figured out the framework for the custody of Marlowe.

Miller told Elle UK in 2019, “We make it work. It’s not conventional.” After their separation, each found love for themselves.

Regardless, the two love each other and will always be there for one another no matter what.

In 2017, Miller told Harper’s Bazaar how the pair still loves each other. She said,  “I think in a breakup, somebody has to be a little bit cruel in order for it to be traditional, but it’s not been acrimonious in a way where you would choose to not be around that person.”

She said that her former partner was her “best friend in the entire world,” and by the looks of it, the two will remain as such for the rest of their lives.