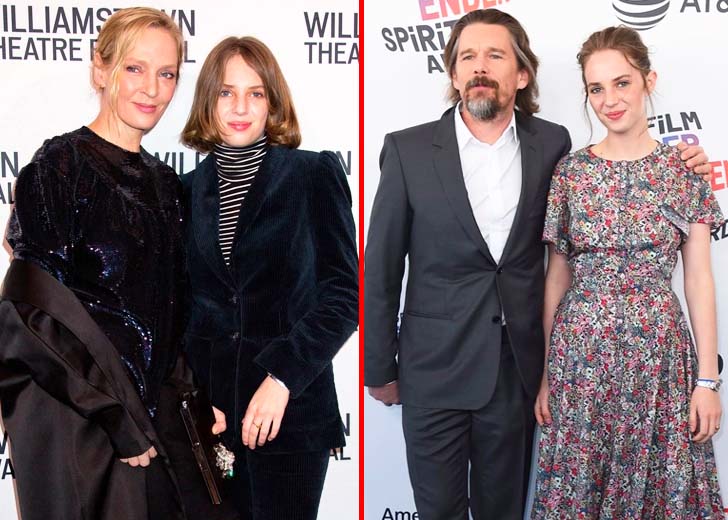 Maya Hawke’s family is supportive of her career despite their personal grudges.

There are a few star kids who have entered the Hollywood industry with the influence of their family, parents, or siblings.

While some are a product of nepotism, some celebrity kids have proved themselves as a force to be reckoned with. One such actress is Maya Hawke.

Maya’s father is the acclaimed actor Ethan Hawke whereas her mother is the 90s’ it-girl and one of the most sought-after actresses, Uma Thurman.

Maya is making headlines for her acting career, especially as Robin Buckley in the Netflix series Stranger Things. Similarly, she has been part of other lauded projects like Little Women and Once Upon a Time… in Hollywood.

She is also currently working on a Wes Anderson movie, Asteroid City. Maya is making a name for herself as an actress.

However, the parents and family were not so supportive in the beginning.

Maya talked about her protective father and mother in an interview with The Guardian on October 31, 2021.

She revealed that initially, they were protective of her getting involved in the entertainment industry. So, they tried to divert her career option.

Rather than having problems with her acting, her parents were more cautious about its side effects. Since they had been in that position before, they knew about the difficulties of being a public figure and how it affects one family.

She said, “They were wary of the public life side of acting and the difficulties of that. They also tried to protect me from falling into acting.”

They did not want her to join the entertainment industry because of them. Moreover, they did not want to take their daughter to every red carpet or have her “do bit-parts in their movies.”

Instead, they wanted to make sure that their daughter was involved in Hollywood and the entertainment industry because she was passionate about it.

They ensured that Maya had “a strong enough backbone, my own passion for it and work ethic.”

Eventually, the Stranger Things actress was old, and she knew what she wanted to do in the future. After her mother and father were sure about her career choice, they supported her.

There was no specific moment when Maya chose acting as her career. She told People that she used to do school plays and join acting camps in summer.

Her happy place for her was when she was on stage. She knew she wanted to do it professionally after realizing “there were no school plays for adults.”

She said, “I love this business. I love movies. I love art. I love it so much.”

Maya has four siblings. She has a brother named Levon Thurman-Hawke and three half-sisters.

The brother-sister duo often posts pictures of one another on their Instagram. Levon, like his family, is also involved in the entertainment industry.

However, he is not as famous as them. He recently starred alongside his sister in the fourth season of Stranger Things.

While Levon appeared to be joining his sister on the set of Stranger Things in October 2020, it wasn’t confirmed until later that year that he was on the show.

As Season 4 began in 2022, many unhappy Levon stans learned that thus far, he’s only been spotted as an extra in the background of scenes.

Although we may see more of him as the season develops, he is also well on his way to a successful acting career.

According to Vogue and the Daily Mail, he appeared in the movie Blackout in 2018 and was sighted filming the Apple TV+ series The Crowded Room in New York City in May 2022.