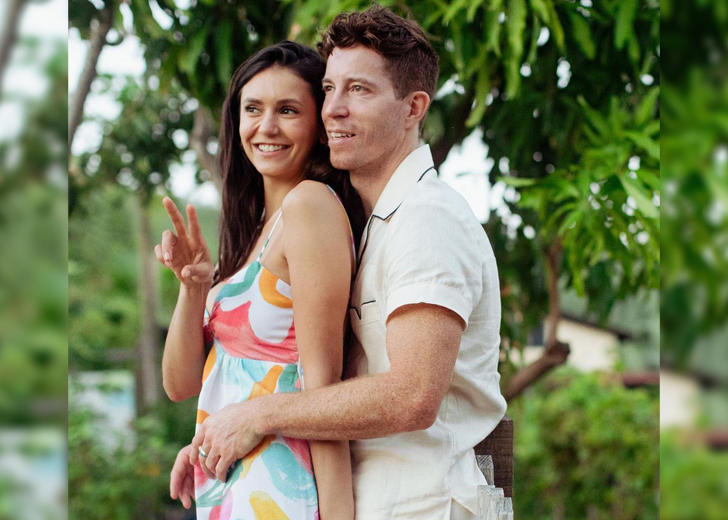 Nina Dobrev is currently in a longtime relationship with her Olympic gold medalist boyfriend Shaun White.

The Canadian actress, age 32, was first linked with her present partner back in February 2020 when people noticed that they had shared pictures that were taken at a similar place when both of them were in South Africa.

The talks got fueled a month later when they were caught riding bikes in Malibu. A couple of months later, it was eventually confirmed that they were together. On May 29, 2020, Dobrev made her relationship with White Instagram official.

“Adding to resume: hairdresser,” she captioned the picture, in which she was holding a scissor whilst about to give a haircut to her boyfriend.

Around the same time, an insider told US Weekly that the couple were living together since the pandemic began and that “They’re super compatible and both free-spirited people.” The insider further added, “They’re very comfortable around each other and both supportive of one another in their fields.”

As time passed, the two were seen vacationing together at several places, hinting that they have bonded very well and it’s not just a short fling. Their strengthening bond was also seen when the duo’s families celebrated Thanksgiving together.

Even more couple pictures of Dobrev and White came as they went on vacations, celebrated each other’s birthdays, celebrated their one-year dating anniversary, and more. And, going by all of that, it seems we’ll see more of their togetherness in the future.

Before developing such an adorable and strong bond with her present boyfriend, the actress was in several relationships in the past. However, none of them worked out for her as she eventually broke up with her partners.

One of her very first relationships was with a fellow Canadian actor named Ben Hollingsworth. Although the two never confirmed their togetherness, it was reported that they dated for almost 3 years, from 2006 to 2009.

In the same year Dobrev split with Hollingsworth, it was rumored that she began dating Evan Williams, after meeting each other on the sets of Degrassi. However, nothing was confirmed.

In early 2010, the actress began dating her The Vampire Diaries co-star Ian Somerhalder. After being in a relationship for three years, they parted ways in May 2013. They ended things on the good side and have remained good friends.

Following her split with Somerhalder, in 2013, she began dating her best friend, Julianne Hough’s older brother Derek Hough. However, things didn’t work out between them and they called it off just six weeks later.

Afterward, there was a line of short-term flings. In February 2014, the Then Came You star was seen kissing Australian actor Liam Hemsworth in Atlanta. In June 2014, Dobrev was caught kissing American actor James Marsden at a New Orleans-based karaoke bar.

In December 2014, it was speculated that she was dating her another The Vampire Diaries co-star Chris Wood. But, even if they had feelings for each other, it all ended when the actress left the show after the end of season six.

After a year filled with short flings, in July 2015, she was caught with Austin Stowell, sharing steamy PDA in Monaco. Their togetherness was confirmed in October. However, they ended things after seven months of dating. Hectic work schedules were cited as the reason behind their split.

In January 2017, Dobrev was linked to Glen Powell after the two were caught hanging out together at the Golden Globes afterparty. They seemingly confirmed their togetherness in July. later, in November of that year, reports came that they were taking some time apart following a year of dating.

In February 2019, news of the Sofia, Bulgaria native dating Grant Mellon broke after Mellon attended Dobrev’s 30th birthday party. That March, they made their first public appearance as a couple during a Los Angeles Lakers basketball game.

Afterward, several PDA-filled pictures came out of the couple from their vacations. Sadly, their togetherness didn’t last long as they broke up almost a year later, in November 2019.

Following her split with Mellon, the actress took some time off romance until she met her now-partner, Shaun White. Since then, she has always been together with White.