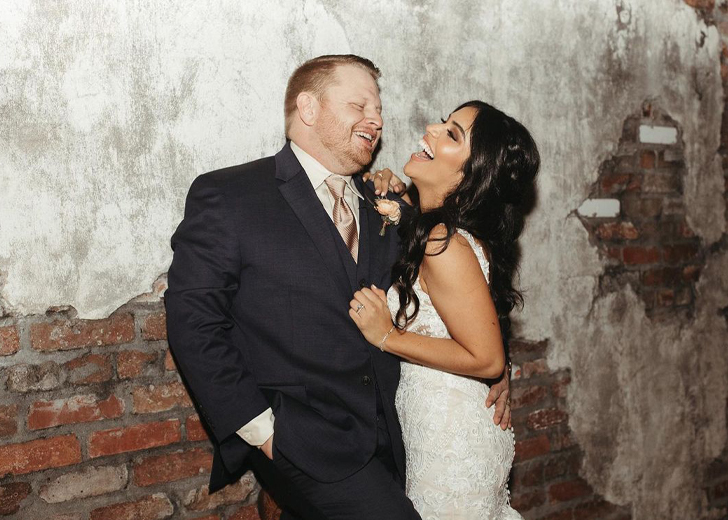 Karrie Martin is an American actress who rose to fame after her appearance in the TV series Gentefied (2020-21). In the Netflix drama-comedy show, she portrayed one of the lead roles of Ana Morales.

Though her acting career has only begun, she has managed to achieve great height and maintain a healthy fan base. However, her career isn’t the only thing that has been successful, as she also relishes a blissful personal life.

Martin is currently in a happy marital relationship with her high school sweetheart Ryan Lachney.

Martin and her husband Lachney are high school sweethearts. The now-married couple first met each other during their childhood days, when they were about 11 years old.

As they went into high school, their friendship took a new turn and they began dating. Their romance continued for years, however, fate had different plans for them.

Martin had to move to Los Angeles to build a reputable career and both of them had different paths. As a result, they decided to part ways. Nonetheless, they remained close friends and supported each other’s career choices.

Martin and Lachney remained apart for six long years, whilst they continued to be best friends. However, their love for each other was too strong for them to stay apart. Around September or October 2018, they got back together.

Speaking on the same topic with People in March 2020, the actress said, “He remained my best friend in those six years apart.”

She further added, “As of about a year and a half ago, we decided that our love was too strong and there was no one else we’d rather share every bit of happiness with. So we got back together!”

Over a year after Martin and her partner got back together, Lachney decided to make things permanent with the love of his life.

In January 2020, the actress and her boyfriend were on their way to Los Angeles from Louisiana. On their way, they made a quick stop at the Grand Canyon. And, little did Martin know what her partner had in store for her.

Taking the perfect opportunity, Lachney went down on one knee and popped the question, with a single solitaire round diamond ring in his hand. She said “yes” and the couple got engaged.

Although they got engaged in January 2020, the news of their engagement was only spilled on March 3, exclusively via People. While talking about the surprise, Martin told People, “It was completely unexpected and beyond magical. I am truly blessed!”

“There’s a saying that goes, ‘You don’t need someone to complete you. You only need someone to accept you completely.’ And that’s us. We’re perfectly imperfect and that’s my favorite part,” the Roommates star added.

Martin and Lachney Married in Late 2020

At the same time, the duo’s engagement news was made public, it was also announced that they will get married in December 2020, also via People.

On December 26, 2020, the actress announced via an Instagram post that she and her beau got married on December 11. She had shared a picture from the wedding in which they were seen kissing.

In the caption, she first wrote, “Happy Holidays from The Lachneys!! On 12.11.2020 I got to marry my best friend alongside our closest friends and family.” She then mentioned that her wedding day was one of the most perfect days and they “are so grateful to God for allowing this moment to happen. All the glory to Him for the journey we went through to get to this day.”

Though they are married now, nothing much has changed for them as they still have all the love, care, and respect for each other as they previously had.