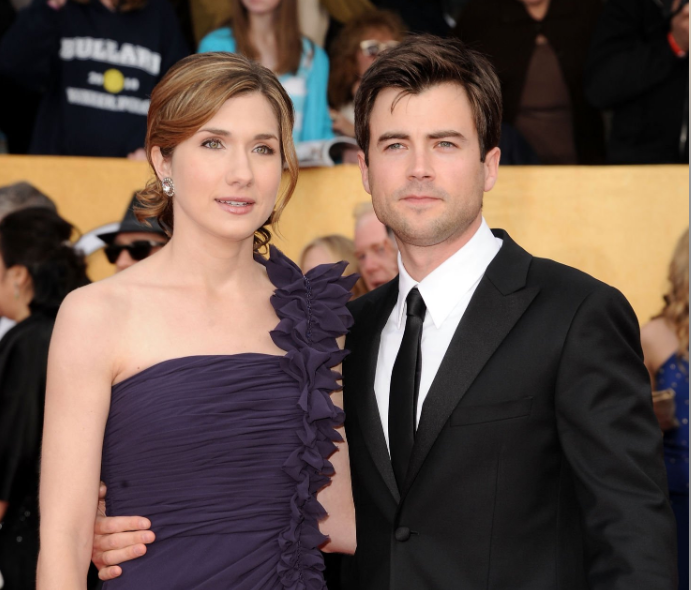 Matt Long keeps his married life secret but sometimes drops a sneak peek of his life for his fans.

Matt Long is an American actor well known for portraying the role of Zeke Landon in the supernatural drama series Manifest and Jack McCallister in the drama television series titled Jack & Bobby.

Long is also famous for his role as Young Johnny Blaze in the 2007 superhero film Ghost Rider and Tyler Prince in Sydney White. Some other movies of the actor are Deceit, Homecoming, Woodshed, and Christmas Joy.

Similarly, he can be seen in numerous television series, including Helix, Graves, Timeless, Lucky 7, and Private Practice.

Inside Matt Long and his wife Lora Chaffins’ secret life

Long and his wife, Lora Chaffins, along with their children, live a very private life. The pair met at Western Kentucky University.

Matt Long and his wife at the 17th Annual Screen Actors Guild Awards in 2011.

The couple exchanged their wedding vows on April 23, 2005. However, both Long and Chaffins have not talked about their nuptials in a detailed manner, keeping most of their married life to themselves.

It has already been over a decade since the two of them were tied in marriage. Despite the secrecy, Long sometimes shares beautiful moments with his wife and children via his Instagram account.

The married couple has two beautiful children: a daughter and a son. Chaffins gave birth to the couple’s first child, a daughter in 2014, and a second child, a son in 2020.

At the time of his son’s birth, the actor uploaded a picture of his son with a heartfelt caption saying, “As those of you with kids know it is the most intense, incredible, and emotional experience of your life.”

On July 14, 2020, Long also shared how he and his family spent four days in a cabin in Sierra, Nevada. He wrote, “My daughter is training for her first backpacking trip in a few weeks so I took her on a hike up to Treasure Lakes.”

As per his IMDb profile, he resides in Los Angeles, loves the outdoors, and enjoys hiking and backpacking when he is not working.

Long was born in Winchester, Kentucky, on May 18, 1980, and is 42 years old. He began acting from a young age in school plays in elementary school. He continued to act throughout his college years.

He went to Western Kentucky University. After graduation, Long moved to New York City, where he worked as an actor in several theaters.

In 2004 he landed a lead role in The WB drama series Jack & Bobby when he was spotted by his current manager while playing at Williamstown Theater Fest. Later, he starred in several TV pilots and appeared in movies, including Ghost Rider and Sydney White.

In 2010, Long portrayed the lead role, Dylan Hewitt, in the television series named The Deep End and a recurring role in Mad Men as Joey Baird. Again after three years, in 2013, he was cast as a lead in Lucky 7.

Long appeared as a recurring character Zeke Landon during the first season of the NBC drama Manifest, and was promoted to the main cast for season 2.