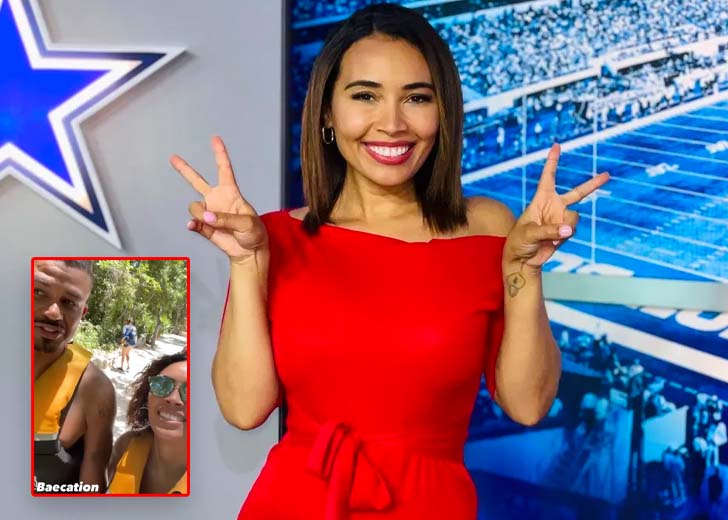 Britt Johnson said, “I mainly see in the next five years me getting married and having kids, two kids.”

Britt Johson is a sports host and producer for Dallas Cowboys who recently teased her fans that she might be in a romantic relationship with someone.

She has worked as a sports reporter in Torrance, where she reported on several red carpets and sporting events on Nationally broadcasted radios and TVs such as Fox Sports and MSNBC.

She has won numerous awards for producing and reporting and spent over 5 years as the main host for The Fumble, which she helped grow an audience of over 1.5 million subscribers.

Britt Johnson showing off her figure during exercise (Source: Instagram)

Besides broadcasting, Johnson is an advocate for fitness and healthy lifestyles and has been plant-based for over a decade now.

Is Britt Johnson dating someone?

Sad news for the single guys out there! Seems like Johnson might be dating someone as the host posted a video of her with a guy with whom she went on vacation in Mexico.

The video was uploaded on July 20, 2022, on her personal Instagram account, where she showed the different places she visited with “baecation” written in her video.

The caption of the video said, “Actually, the best gift you could give her is a lifetime of adventures.” The only conclusion we can get from the video is that she might be in an intimate relationship with the guy on the video.

The video included some sweet pictures of them where Johnson can be seen being all lovey-dovey with the guy enjoying every moment with him.

The video also included what seemed like a surprise from the guy where he decorated the room and the tub filled with rose petals, and Johnson seemed quite surprised and happy. However, the name of the lad is yet to be revealed.

The fans were shocked, and many commented on the post. “Y’all are so cute! I love this,” “Okkkk relationship reelssssss!!!!!!,” “You look so happy!!” were some of the comments from the post.

Nonetheless, in the YouTube live video streamed by the host on Jan 3, 2022, she described, “I mainly see in the next five years me getting married and having kids, two kids. I wanna have two kids, that’s definitely on my list,” when she was asked “how do you see life playing out for you in the next five years?” by a fan.

Who is Britt Johnson? All about the anchor

Britt Johnson was born in California and explored most of the country as her family served in the United States Army.

She developed a strong sense of competition and leadership from cheerleading growing up. Her affection for sports led her to become the captain of her cheer team, track team, and dance team, as per her website.

Johnson went to California State University, Fresno, where she got her bachelor’s degree in Communication and also minored in Special Event Planning.

During her college time, she interned at KSEE 24 News Station, where she got the opportunity to learn many sides of the industry, from production to editing. Her career as a sports host began when she was given a chance to report from the sideline at all of Fresno State’s sporting events.

Later, she also worked as an event planner joining the Los Angeles Clippers organization by coordinating private events and customer relations for high-profile clients. But Johnson felt there was still something missing and a voice telling her she needed more.

She then decided it was time to revisit sports broadcasting by taking classes to enhance her natural skills. She worked as the weekend sports anchor for KLAF and KADN in Louisiana.

Posted on August 28, 2022August 28, 2022
Julio Macias and his wife, Shannon Schotter, are extremely private about their married life.
Read More

Posted on December 25, 2021December 25, 2021
Photo: Kamrin Houser Instagram Jordyn Jones seems to have found a boyfriend over four months after mentioning she was single. The American actress has...
Read More