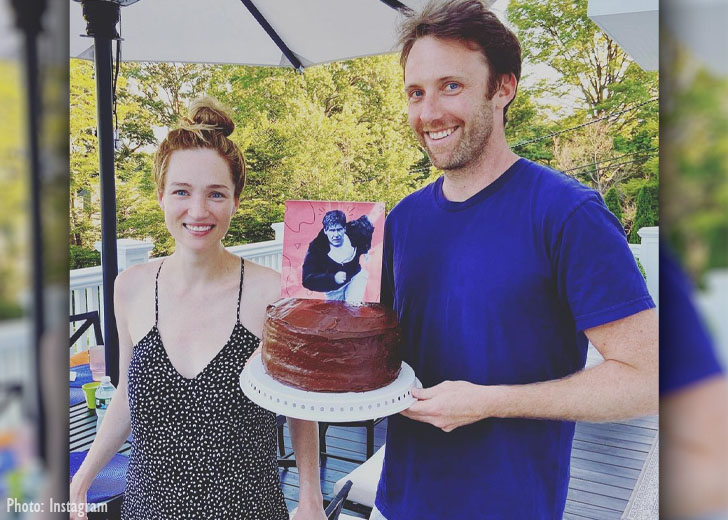 Kristen Connolly is a talented American actress who came into the limelight for her amazing performances in movies and TV shows like iChannel, The Happening, Guiding Light, The Cabin in the Woods, and The Bay.

Her popularity boosted when she played in a couple of renowned shows, including House of Cards, The Whispers, Zoo, and Evil. Soon, she will be seen as Jackie in the upcoming drama-thriller movie Deep Water, starring Ben Affleck and Ana de Armas. It will release on March 18, 2022.

While her professional life remains quite known among the audiences, her personal life is only limited to people close to her and her die-heart followers. Is Connolly married to a husband? Or dating a boyfriend?

Who is Kristen Connolly married to?

Connolly is a happily married woman. She has been in a marital relationship with her longtime husband, Stephen O’Reilly.

The couple is quite private about their relationship and hasn’t shared any details of the initial time of their togetherness. Due to that, it’s currently unknown when and where the couple first met, including when they began dating each other.

Another unknown detail about their relationship is their wedding date. Connolly and O’Reilly have kept all the information about their marriage upto themselves, and only a limited number of people who had attended their wedding know more about it.

The very first time the actress featured her husband on her Instagram handle was on February 22, 2018. She had shared a black and white picture alongside her partner and captioned it, writing, “#polaroid.”

Since then, she has occasionally featured her beau on her only-social media handle – Instagram. She prefers to keep her romantic life details hidden from the outside world most of the time.

The last time she posted a picture of her husband on Instagram was on May 14, 2021, that too, on the special occasion of his birthday. She had shared two photos of him – one was of the present time, and the second one was of O’Reilly as a baby.

Considering all the known details, it’s safe to say that the married couple has been living happily together while maintaining privacy over their relationship.

Kristen Connolly is a mother of two

From her marriage with O’Reilly, Connolly is a mother of two children. The duo is blessed with a son and a daughter.

Connolly announced the birth of her first child, a son named Aidan, on August 1, 2018, via an Instagram post. She had posted a picture of her baby boy while her husband held his hands.

“Welcome to the world, little one. @stephenjamesoreilly and I love you so very much,” she captioned her post.

At the time of their son’s birth, the married couple lived in their Boerum Hill, New York-based residence. But, they decided to sell it and move to another place following the birth of her son.

As per the outlet, Connolly told Gimme Shelter, “We thought we’d be here a long time.” But that plan changed after having a baby. “We grew up in the suburbs, and we want a backyard and to be closer to our families,” she added.

The family of three moved to Montclair, New Jersey, where Connolly is originally from.

On May 6, 2020, the actress announced the birth of her second child, a daughter – whose name isn’t disclosed yet. In the picture she posted, she was seen holding her baby girl in her arms while wearing a mask.

“Born in a pandemic, and loved beyond measure,” she first captioned the post. She then thanked the medical personnel at the Hackensack University Medical Center for taking “such good care of us all and getting our girl here safe and sound. Gratitude doesn’t begin to cover it.”

Connolly hasn’t shared many pictures of her daughter – a thing she did when her son was born. It seems like she has been more private about her personal life than she was previously.

Who is Kristen Connolly’s husband?

As of this writing, there are no official details of Connolly’s husband, O’Reilly. However, several outlets have mentioned him as an actor and writer, as well as the lead vocalist and guitarist of the band, Tammany Hall NYC.

Kristen Connolly and her husband, Stephen O’Reilly, with their first baby (Photo: Instagram)

But, none of those details have been confirmed. So, that couldn’t be taken as validated information.

O’Reilly prefers to live away from the limelight and doesn’t use social media. Although he has an Instagram handle with 199 followers, he has only made one post, which is also a random post.

So far, the only information known about him is that he celebrates his birthday every year on May 14. This was also known when his actress wife wished him on his birthday in 2020.

Everything You Need to Know About 'Deep Water' Star Devyn A. Tyler