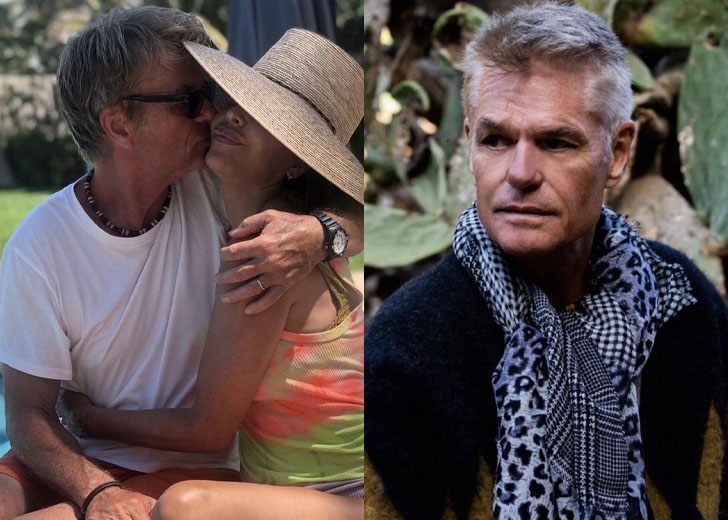 Harry Hamlin has been engaged once and married thrice in his lifetime.

Although the engagement and first two marriages didn’t last long, his third and present marriage has lasted for quite a long time. The American actor is currently married to his third wife, Lisa Rinna – got married in 1997.

But what’s the secret behind his more than 24 years of togetherness with his actress wife? Here is what Hamlin and Rinna had to say about that!

On February 2, 2022, People Magazine covered an exclusive story with Hamlin and Rinna, where the couple of almost 25 years opened up on the secret behind their successful and happy marital relationship.

The actor first mentioned that the secret was to be diametrically opposite. “I like going up to the mountains, and her idea of camping is anything below the 10th floor of the Four Seasons,” he added.

Lisa Rinna followed up with her spouse’s words as she said, “We’ll be married for 25 years in March, and I’ve worked hard. So I’ve picked out a very nice diamond.”

As the married couple went on, they talked about how they went on their first date and that they hadn’t spoken in months before their first date. They went to have dinner at an Italian restaurant.

They got close to each other, began dating for a while, and eventually married. Now, they have been together for almost 25 years.

In the end, they mentioned that they have learned a valuable lesson: a long-lasting marriage boils down to mutual respect for each other and willingness to listen.

“We’ve always heard each other,” Hamlin said. “And it doesn’t hurt that he’s so good-looking,” Rinna, age 58, added.

Previously, Lisa Rinna had talked about the secrets of her long-lasting relationship with her husband during her appearance on Watch What Happens Live with Andy Cohen in February 2018.

At that time, she had said similar lines that her spouse mentioned during the above-mentioned interview’s first line. She said, “I don’t really know. I really don’t know the answer. I think that we are complete opposites. And I mean, we have nothing in common!”

Harry Hamlin admits ‘the sex is still great’ between them

More recently, on March 1, 2022, the Mad Men star did an interview with his longtime friend Andy Cohen for Interview Magazine. The two friends talked about several things, including Hamlin’s long-term marriage with his third spouse.

While coming to the part of his marriage with Lisa Rinna, Cohen brought up one of the lines from Hamlin’s 2010 memoir, Full Frontal Nudity: The Making of An Accidental Actor. At the end of that memoir, Hamlin had thanked his wife for her support and “all the great sex.”

“How long have you been married?” Cohen asked. “Our 25th anniversary is coming up in March [2022],” Hamlin replied. Right after that answer, Cohen asked Hamlin if things were still good, hot, and heavy between him and Rinna between the sheets as they were before.

In reply to that, the 70-year-old Hamlin said, “Of course it is, Andy! We’re still married.”

Cohen then stated that he has talked to several married couples who have been together for more than “10-plus years, 15-plus years, 20-plus years” and that they “can’t say that the sex is still great. What do you attribute it to?”

Hamlin replied to that question by saying, “I’m sorry about that. A lack of ED [erectile dysfunction], perhaps?” Cohen asked, “A lack of ED?” to which Hamlin replied, “Yeah. I don’t have that condition.”

Hamlin and Rinna have been a married couple for nearly 25 years. They shared the wedding vows on March 29, 1997, in Beverly Hills, California.

Since then, the married couple has always been together, has supported each other in every circumstance, and has mutual respect for each other and their professions.

From their marriage, Hamlin and Rinna are parents to two children – both daughters – named Delilah Belle (b. June 10, 1998) and Amelia Gray (b. June 13, 2001). The family of four has appeared together on the show Harry Loves Lisa.

Before Hamlin’s relationship with Rinna, he was engaged once and married twice. His engagement was with actress Ursula Andress, sometime after they began dating in 1979.

While they were together, he welcomed his first child, a son named Dimitri Alexander, in 1980. After four years of togetherness, in 1983, Hamlin and Andress broke off their engagement.

Two years after his split with Andress, Hamlin married actress Laura Johnson. Their marital relationship lasted for four years only, as they called it quit in 1989.

In 1991, he shared the wedding vows with actress Nicollette Sheridan and separated her just one year later, in 1992. Hamlin doesn’t have any children with his former spouses.