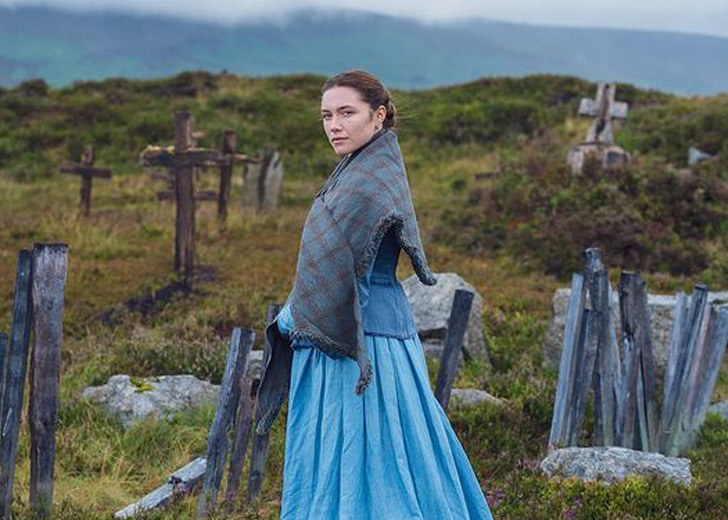 Florence Pugh has been a star in the making with her earning an Oscar nomination for her role as Amy March in 2019’s Little Women and a buzzing performance as Yelena Belova in 2021’s Black Widow.

The English actress is yet to share the wedding vows with her boyfriend and officially call him her husband.

However, even though they are yet to get married, they have been living together in Los Angeles for a while. Besides, during the quarantine period, they even adopted a dog whom they have named Billy.

The couple is presently relishing the time they spend alongside each other and it seems it will take some time before they tie the knots.

Pugh’s relationship with Braff likely began sometime after the latter cast the actress in his 2019 short film In The Time It Takes to Get There. Though the short movie was released in 2019, the casting was probably done around mid-2018.

In late 2018, the actor started to like his now-girlfriend’s Instagram posts. That might be the time when they started dating. Later, on April 12, 2019, E! reported that the two were caught holding hands and strolling around New York City.

On October 10, 2019, Braff finally featured Pugh on his Instagram handle. The picture was of him alongside three other ladies, including Pugh. “People I love.” he wrote in the caption.

In that post’s comment section, Julia Garner almost confirmed Braff and Pugh’s relationship when she commented, “I love @florencepugh too!!!!” with several red heart emojis.

In the same month, a source told Page Six, “It was very clear to me that they’re a couple.” A month later, they attended the Los Angeles premiere of Adam Driver and Scarlett Johansson starrer’s movie Marriage Story. However, they didn’t make the entrance as a couple.

On December 28, 2019, the duo’s relationship was officially confirmed when Pugh posted a picture of herself posing outside a Los Angeles deli. Braff had commented a princess emoji to which one Instagram user had replied, “You’re 44 years old.”

In reply to that comment, the then-23-year-old actress responded with a clap-back comment as she wrote, “and yet he got it👌🏽.”

In March 2020, the couple was spotted taking a little walk in Los Angeles while being cautious of the pandemic. In the next month, on the occasion of Braff’s birthday, Pugh made her relationship Instagram official.

For the first time since they began dating, she shared a single picture of her boyfriend on her Instagram handle. “Happy Birthday wishes, boogies and cheers for this special person. Raise those bubbles and jiggle!” she wrote in one part of her caption.

Three days later, on April 9, 2020, Braff announced that he and his girlfriend have adopted a dog named Billie.

Later, on Pugh’s 25th birthday, January 3, 2021, Braff gave a tribute to his partner. He had shared a series of pictures of Pugh and wrote a beautiful caption. His caption was:

“Happy Birthday to the most fun person I’ve ever met. I would have felt blessed to have smiled with your for one night. I can’t believe I get to giggle with you everyday. What a pleasure it is to know you. What a gift to the world it was that you were born.”

Pugh returned the favor on her partner’s 46th birthday, April 6, 2021, when she posted some pictures of Braff and their dog and wrote a heartfelt caption.

The love story between the two has been continuing now too, with both of them appreciating as well as being proud of each other and their profession.

Just some minutes after Pugh made her relationship with Braff Instagram official, the actress had to disable comments on that post. She did so because people began to downgrade her due to the 21-year age gap between her and Braff.

Later, she posted a 4-minute long video in which she defended her relationship with Braff. In the video, she talked about several things, including that she is old enough to make her own choices and no one needs to tell her who she should love and should not love.

“And I would never in my life ever, ever tell anyone who they can and cannot love. It is not your place. And really, it has nothing to do with you. So if those rules are something that you do not like, then please unfollow me because the abuse that you throw at him is abuse that you’re throwing at me,” she had further added.

One of them was Ariana Grande who had commented “‘being hateful is not trendy’ a new tattoo for my chest. oh i love and appreciate u so much” and even shared the video to her Instagram Story.

Pugh continued to defend her relationship in several of her interviews as well. For instance, in her May 2020 interview for the cover of Elle UK, she mentioned how it was necessary to clap back at the trolls and defend her romance.

She also told, “because people need to realize that it’s hurtful. I have the right to hang out and be with and go out with anyone I want to.”

On the other hand, in Braff’s interview with Mr. Porter in November 2020, the actor showed his full support for his girlfriend and also gave an insight into why he didn’t address the topic.

He had mentioned, “She literally sat down, hit record on her phone, and said that. I thought, How could I possibly follow anything as intelligent and articulate as that? So I chose not to.”

How Is Donald Glover Related to Danny Glover? Who Is His Dad?