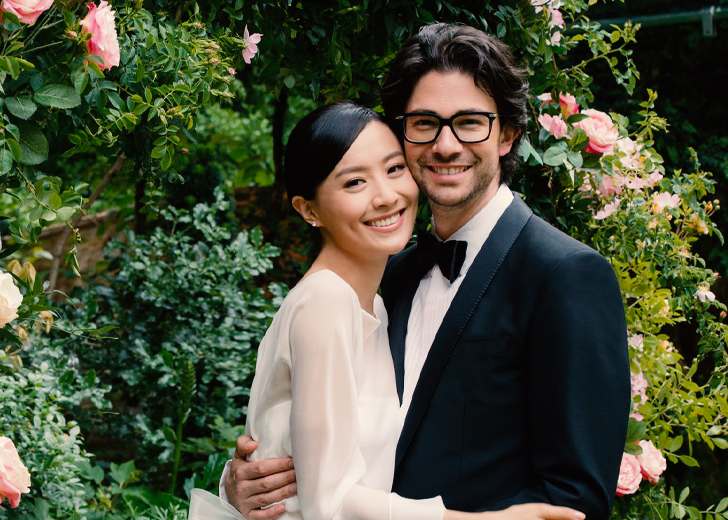 Fala Chen is a China-born American actress who has earned fame for her performances in several Hong Kong TVB drama series such as No Regrets (2010), Lives of Omission (2011), and Triumph in the Skies II (2013).

In the movie, she portrayed the role of Ying Li, wife of Xu Wenwu, played by actor Tony Leung, and mother of the titular character Shang-Chi, played by actor Simu Liu. Other cast members are Awkwafina as Katy, Meng’er Zhang as Xu Xialing, and so on.

While the actress is a wife as well as a mother in Marvel’s first Asian lead movie, does the same thing applies to her off-screen too? Is she married? Or is dating and has a boyfriend?

Is Fala Chen Married to a Husband?

The 39-year-old actress is currently in a blissful marital relationship with her long-time boyfriend turned husband Emmanuel Straschnov. Straschnov is a French entrepreneur and founder of Bubble, an information technology company.

The now-married couple first met each other around 2015-16, while Chen was pursuing a four-year Master of Fine Arts in Drama degree at The Juilliard School in New York.

Chen and Straschnov fell in love and began dating each other. However, they agreed to keep their togetherness low-key and keep it away from the media and public.

After dating each other for years, they decided to make things permanent. On May 18, 2019, the two walked down the aisle and shared the wedding vows. Their wedding was held in Paris and was attended by family and friends only.

Around three days later, on May 21, Chen took to her Instagram handle to announce her wedding and introduce her partner to the world. She had shared a couple of pictures from her wedding and captioned it by writing, “Thank you all so much for being there on May 18 and to help us create this special memory. I’m very lucky to have you all in my life. Most of all, I have to thank my parents and… Emmanuel for his love.”

Since then, the duo has been relishing the marriage part of their lives. They usually share pictures alongside each other and have a very funny and loveable bond.

One such instance was seen on September 6, when Straschnov shared a picture from the Shang-Chi And The Legend Of The Ten Rings movie. In the picture, Chen’s character and Tony Leung’s character (their characters are husband and wife in the movie) were looking very deeply into each other’s eyes.

And, it seems like Chen’s real-life husband, Straschnov, got jealous by seeing it as he captioned the picture as “If only my wife could look at me like this…”

In reply to her husband’s jealous tweet, the Chinese American actress retweeted the post and wrote, “You know you are doing a good job when your husband is jealous.” The sentence was followed up by a Face with tears of joy emoji.

Going by those, it is clear that the husband and wife duo have developed a strong bond and they surely know how to have fun.

Chen and Straschnov Are Blessed with a Baby

The married couple’s bond got further strengthened when they welcomed a baby into their family. On February 14, 2021, Chen announced via an Instagram post that she and Straschnov have become parents to a baby daughter.

“The past 10 months have been a wondrous journey, filled with unknowns, amazement, love, and lots of joy. Our hearts are full as new parents, and we look forward to every day with this little lady,” Chen captioned the picture.

The actress has only shared a couple of pictures of her daughter since her birth. It looks like the new parents are keeping her daughter away from their limelight as Chen is yet to disclosed her daughter’s name and show her face in pictures.

Whenever Chen shares pictures of/alongside her daughter, she has always kept her face hidden, either through camera angles or by using stickers. Despite all that, one thing is sure that the duo is having an amazing time as parents.

Before tying the knots with her current husband, the 5 feet 7 inches tall actress had already shared the wedding vows once.

Chen was previously married to a businessman named Daniel Sit. They married in 2007 but decided to keep it a secret for Chen’s acting career, as per Daniel Sit.

After being married for around 6 years, they decided to part ways in 2013. Following that, both of them kept their love life low-key. Recently, on September 14, 2021, it was reported that Sit is now engaged with a woman named Cherie.

Tags: Emmanuel Straschnov,Fala Chen,Shang-Chi and the Legend of the Ten Rings