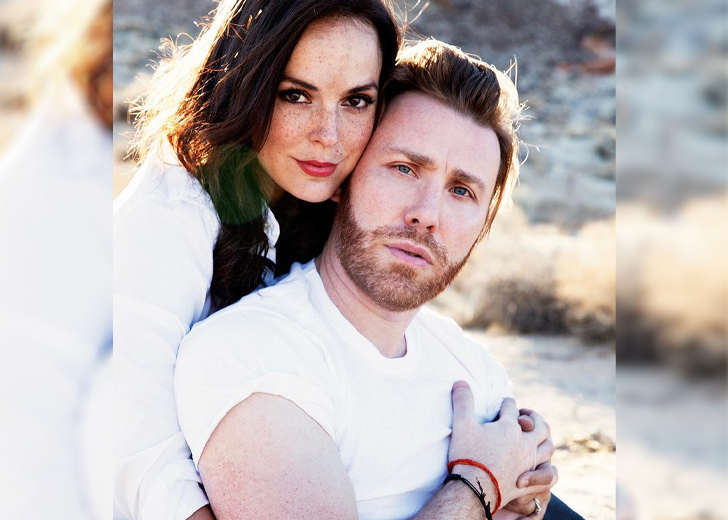 Erin Cahill is a talented American actress known for her performances in numerous movies and TV shows. To this date, she has a total of over 120 acting credits to her name.

In recent years, she has been garnering fame for her roles in Hallmark Channel movies such as Sleigh Bells Ring (2016), Last Vermont Christmas (2018), Love, Fall & Order (2019), and others.

Not only does the actress has a successful career, but she also relishes a happy married life. Cahill is currently in a long-term marital relationship with her husband, Paul Freeman.

Cahill and Freeman Married in 2016

The 5 feet 7 inches tall actress has been in a blissful marital relationship with her husband Paul Freeman, a Welsh-born musician/songwriter, for over five years.

The couple met each other a long time before sharing the wedding vows. After dating each other for a long time, they decided to legalize their relationship officially.

On September 3, 2016, they walked down the aisle in a beautiful wedding ceremony held in Provence-Alpes-Cote d’Azur, France. Thirty-five of the duo’s family and close friends were present to witness the ceremony.

A couple of days after the wedding, on September 5, Cahill took to her Instagram handle to share the news among her followers. She had posted a collage of pictures from her wedding and had written a long caption.

In the caption, she first mentioned that her every dream surpassed on Saturday (her wedding day) as she married the love of all her lifetimes in a way she and Freeman had dreamt of and planned all along.

She also stated that her sister and her husband’s brother officiated the wedding in a 17th century chapel on the property of the incredible Chateau Germaine, where they lived for ten days before tying the knots.

The caption continued, “Being surrounded by 35 of our beloved family and friends…Words can not describe our joy and gratitude. I didn’t know it was possible to be this happy. Thank you to our most loved ones who came. Those who couldn’t…you were so with us in spirit. We love our incredible community and are so excited to start our lives together as husband and wife!!”

Since the day they got married, Cahill and Freeman have been relishing the best days of their lives as a husband and wife duo.

If we look through Cahill’s Instagram handle, the happiness in their marital life can be easily witnessed. The two could be seen going on vacations, celebrating festivals and other special occasions, and cherishing every moment they spent with each other.

On September 3, 2021, they also completed five years of their marriage, and on that special occasion, the A Timeless Christmas movie star dug deep into the memories shared some amazing pictures of herself alongside her husband.

Additionally, she wrote a heartful caption to accompany the pictures. First thing first, she wrote, “Happy 5 year anniversary to my soulmate Paul Freeman!! I am so grateful for you, my beloved.”

Continuing the caption, she mentioned that her partner had made her the happiest woman every day while thanking him for teaching her and growing alongside her.

“You are my greatest gift. So thankful for every anniversary adventure we have had and to all those that are ahead. I love you eternally,” Cahill wrote in the end.

Well, going by that, it sure looks like the married couple has been living an amazing marital life with both of them holding each other’s hand in every situation.

Are Cahill and Freeman Blessed with Children?

Since the actress and her husband have been married for over five years now, many people have wondered if they have welcomed children of their own or not.

Well, Cahill and Freeman are yet to have kids and expand their family. It seems like they are in no hurry to have children.

Although they do not have any children, they do have adopted two pet dogs whom they love a lot. Cahill often features pictures of their pet dogs on her Instagram handle.