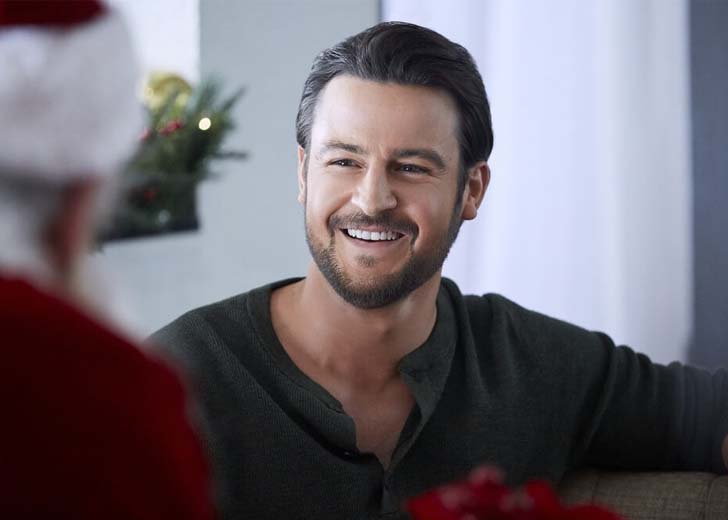 Tyler Hynes has established a remarkable fanbase thanks to his acting. The Canadian actor is mostly known for portraying romantic roles in Hallmark Channel movies such as Wedding March 5: My Boyfriend’s Back (2019) and It Was Always You (2021).

Due to the romantic ties in his professional life and how profoundly he portrays such roles, many of his fans have wondered if he has anyone in his personal life with whom he shares such romantic time.

Although the 35 years old actor hasn’t shed much light on his present relationship status, his fans know that he was once in a relationship.

Hynes Was Allegedly Dating in 2017

The Gemini Award-nominated actor prefers to keep his personal life details up to himself only. Perhaps that’s the reason why he doesn’t share much regarding that specific topic, either in the media or through his social media handles.

However, upon digging deep into his Instagram handle, a picture of his alleged girlfriend, Racquel Natasha, from 2017 was found.

In the since-deleted picture, Hynes’ alleged girlfriend was sitting alongside her pet dog with a pumpkin in the middle of her and dog.

He Once Said That His Girlfriend Used His Twitter Handle

Even though Hynes has mostly kept his romantic life details away from the media, he once mentioned that his girlfriend has access to his personal Twitter handle. But, it’s not confirmed if his girlfriend was the same girl whose picture he shared in 2017.

While he was promoting his two TV movies, It’s Christmas, Eve, and Falling for You, the 5 feet 9½ inches tall actor gave an interview for My Devotional Thoughts in October 2018.

During that interview, he revealed that he is not much of an avid Twitter user and hasn’t used the social media platform much since he was on the TV series, Saving Hope (2013-14).

Afterward, he stated that his girlfriend had opened his Twitter handle just a day before that interview and told him that his followers had increased. His exact words:

Oh, yeah, my girlfriend opened up my Twitter the other day, and I haven’t been on there in so long. She told me I had so many followers on this Twitter account.

Following that, the Toronto, Ontario native hasn’t opened much about his personal life. As a result, it cannot be said if Hynes is still with the same girl or he has broken up with her.

As already mentioned above, the Canadian actor likes to keep his romantic life details away from the eyes of the public and media.

On his social media handles, too, he has only been sharing pictures alongside his co-stars and photos related to his profession. None of those pictures give any hint on whom he is dating.

Going by that, it seems he is probably single in real life, much opposite to his reel life where he finds some romantic connection. However, only time will tell if the actor is hiding his partner or is single for real.

Hailing from the suburbs of Toronto, Ontario, Canada, Hynes was born in 1986. He celebrated his 35th birthday on the 6th of May this year.

On his 35th birthday, he shared a picture from the sets of his upcoming acting project to thank all of his well-wishers who sent their kind wishes.

As for his parents, it is known that his mother’s name is Betty Robichaud Hynes, and his father is of Caucasian ethnicity. The identity of his father is yet to be revealed. Apart from his parents, Hynes has a sibling, a brother named Brandon Hynes.

For his academics, he went to Hammond, Ontario-based St-Francis Xavier Catholic High School.