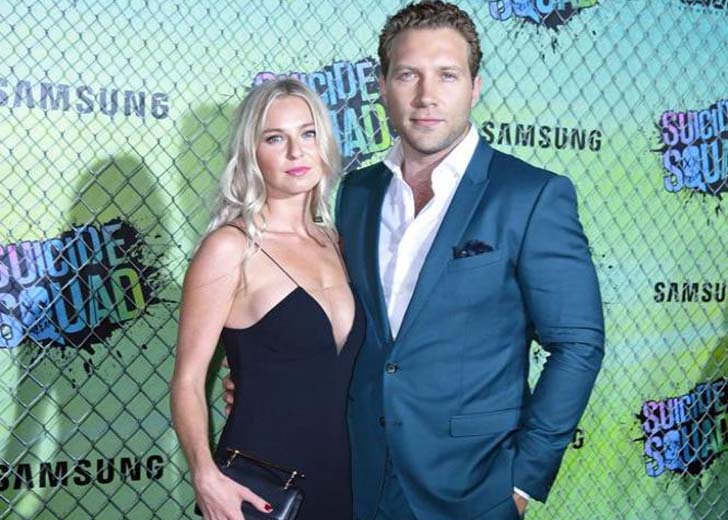 At present, the 35-year-old actor is set to reprise his role as the DC Comics villain Captain Boomerang in the film sequel of 2016’s Suicide Squad titled The Suicide Squad.

The movie is slated to premiere in the United Kingdom on July 30, 2021, and the United States on August 5.

Courtney Is In a Committed Relationship

The Sydney, New South Wales native actor, is yet to share the wedding vows and settle down with a wife. However, that doesn’t mean nothing interesting is going on in his personal life as he is in a relationship.

The couple reportedly started dating circa 2015, according to AP News. But although they began dating in 2015, their togetherness came out only a year later when Dent accompanied her beau during the red carpet premiere event of 2016’s Suicide Squad in New York.

A few days later, the two’s romantic connection made headlines as they showed PDA by kissing each other during Suicide Squad’s London premiere. Since then, they have been public about their romance.

As time passed, they began to travel together, go on vacations, and celebrate festivals—making their bond stronger. Some glimpses of their togetherness can be witnessed through their respective Instagram handles.

For instance, on January 11, 2019, Dent, a former PR coordinator, shared a cute selfie captured alongside her partner with the former captioning it by writing “[ stolen moments ].”

On the occasion of his girlfriend’s birthday, May 6, 2021, Courtney also shared some snaps of her and captioned them by writing “Chaos & Magic. happy bday my love.”

Going by that, it sure seems Courtney and Dent have developed a magical bond, with their love for each other growing day by day.

Before developing such a strong bond with Dent, Courtney was previously engaged in a couple of dating relationships, the most renowned being his relationship with a fellow Aussie actress, Gemma Pranita.

Courtney and Pranita started dating each other in 2006. They were open about their relationship and occasionally appeared in public. However, they weren’t meant to be together as the two decided to split after 7 years of relationship in 2013.

Two years after he broke up with Pranita, in 2015, the Terminator Genisys actor was linked to Game of Thrones actress Emilia Clarke. But, the rumors were never confirmed. Later, he began dating his current partner, Mecki Dent.

As for Courtney’s present girlfriend, Dent, she was in a long-term relationship with the Fox Sports presenter named Ben Way. Other than that, there is no news of her past relationships.

The 6 feet 1-inch tall actor’s first step in becoming an actor was getting enrolled at a drama school named Western Australian Academy of Performing Arts (WAAPA). Then, after a brief time of graduation, he finally stepped foot in the entertainment industry.

Courtney’s first acting role came in 2005 when he portrayed the role of Alex in a short movie titled Boys Grammar. Three years later, he made his television debut through the TV series, All Saints. In the same year, he also starred in another TV series named Packed to the Rafters.

In 2019 and 2020, he portrayed some amazing roles in movies and TV series such as Buffaloed (as Wizz), Brothers in Arms (as Callahan), Stateless (as Cam Sandford), and Honest Thief (as John Nivens).

In 2021, as of this writing, he has only appeared in one movie, Jolt (as Justin). But, that’s going to change soon as he will be reprising his role of Captain Boomerang in the sequel of 2016’s Suicide Squad movie titled The Suicide Squad.

Furthermore, he already has a movie that will release in the next year. The movie is titled Black Site, and it is currently in the post-production phase.

Elizabeth Ann Hanks: Everything to Know about Tom Hanks' Only Daughter

Apple's worst ever design: how is this even possible?