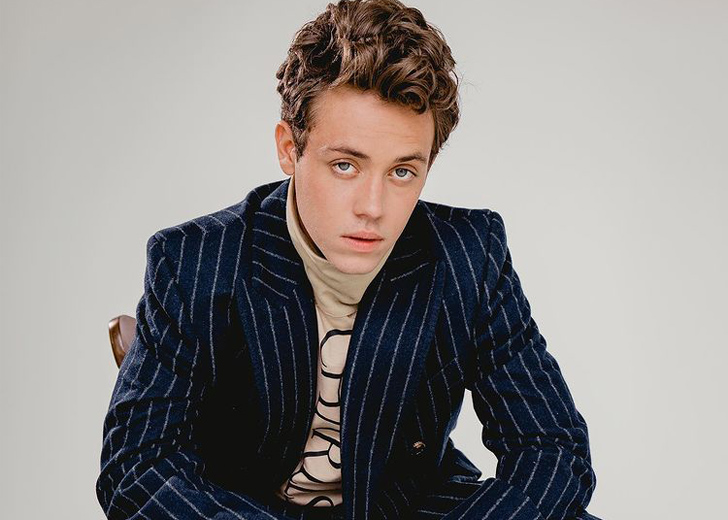 Ethan Cutkosky is an aspiring American actor who first gained the limelight after portraying the role of Barto in the 2009 movie titled The Unborn. His popularity got boosted when he began playing one of the main roles of Carl Gallagher in the TV series, Shameless (2011-21).

Apart from acting, he is also known for his singing. Just a few weeks ago, on July 16, 2021, he released his single titled Erase Me.

Born as Ethan Francis Cutkosky, his father, David Cutkosky, is a computer software engineer and his mother, Yvonne ‘Cabrera’ Cutkosky, is a former teacher. His mother is of Mexican descent. He is the only child of his parents and thus does not have any siblings.

As for his education, he initially attended Bell Graham Elementary School and Thompson Middle School. Later on, he enrolled at St. Charles East High School.

He Has an Average Height

His body measurements are 34-28-13 (chest-waist-biceps). Additionally, the slim and fit actor’s eyes color is blue and his hair color is brown.

He Rose to Fame through ‘Shameless’

After doing ads and working for commercials for a short period, Cutkosky landed an uncredited role in 2007’s Fred Claus. After that, he played in only two movies, one of which was The Unborn (2009), before being cast as Carl Gallagher in Shameless in 2011.

As he portrayed the role of one of the lead characters in the TV show, he began to receive praises as well as fame. As the show continued to get renewed for another season, he continued to play his role with the same passion.

The audience got pretty hooked up with his performance. To this date, the comedy-drama show is still running with the last episode of the 11th season being aired on April 11, 2021. As for Cutkosky, he has made his appearance in a total of 134 episodes.

The St. Charles, Illinois native has a total of 8 acting credits to his IMDb profile. Soon, two more acting projects will be credited to his name when they get released.

One is titled Alex/October, which releases in 2021, and the other is titled Going Places, which is currently under post-production (he is also the co-producer of the movie).

Taking all of that into consideration, it must be sure that he has managed to accumulate healthy net worth. Well, as per Celebrity Net Worth, Cutkosky has a net worth of $1 million.

The Shameless actor is reportedly dating a fellow actress Brielle Barbusca. Although their dating timeline isn’t vividly clear, they seem to be dating since late 2016 or early 2017.

The very first time both of them were seen together was on February 14, 2017, when Barbusca shared a selfie with Cutkosky with the caption, “My Valentine. Xoxo.” On July 2, the actor once again appeared on his partner’s Instagram.

Next year, on March 24, Barbusca shared another picture with her boyfriend with a caption that read “thanks for being the best hiking buddy (and holding my backpack when I got lazy).” However, following that day, Cutkosky hasn’t made any appearance on Barbusca’s social media feed.

As for Cutkosky, his Instagram posts start only from December 13, 2018, and Barbusca hasn’t appeared in any of the pictures the actor has shared. As a result, many have started to think that the couple broke up.

However, some news outlets such as Cheatsheet and E! Online reported in 2020 that they are still together. But it is not known if they are married, turned husband and wife, or just in a relationship. Besides, none of them have appeared with another person who can be regarded as their new partner.

Thus, without any official confirmation, nothing can be said if Cutkosky and Barbusca are still together or they have parted their ways.