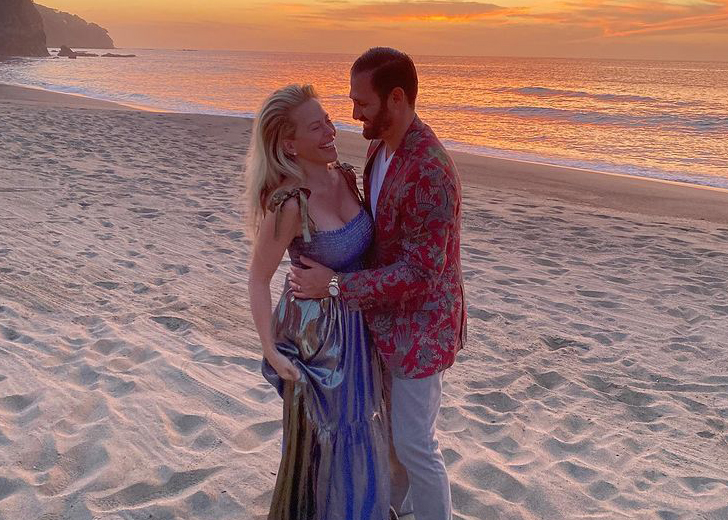 Dina Manzo (née Laurita) is a well-known American TV personality who is best known for her appearance on the hit reality TV show The Real Housewives of New Jersey. She has also earned fame for being the host of the HGTV party-planning TV show, Dina’s Party.

Additionally, she is also an entrepreneur who runs an online shop named Livving by Dina. Previously, in 2016, she had released a skincare product line named Glow by Dina.

Not only is the American television personality has been successful professionally, but she has been doing very well in her personal life side.

Manzo is currently in a happy marital relationship with her boyfriend turned husband, Dave Cantin, an entrepreneur who is the CEO and founder of Dave Cantin Group. The two shared the wedding vows on June 28, 2017, after dating each other for some period.

Here is a quick scroll through Dina Manzo’s Instagram handle, where she usually shares pictures alongside her better half and showers her love for him.

On October 26, 2019, Manzo’s husband, Cantin, celebrated his 40th birthday. On that special occasion, the TV personality took to her Instagram handle to share a selfie alongside her husband.

In that picture, the two were smiling as they were seen in a boat in the ocean. By the looks of it, they might have gone somewhere to celebrate Cantin’s birthday.

Accompanying the picture was a sweet caption that read, “I made a list, I wrapped it around my rose quartz and prayed for my Scorpio. You’re everything I prayed for and more. I love you @davecantin. Happy Birthday. Here’s to a lifetime of HAPPY HEALTHY Birthday celebrations together.”

Everyone is very proud of what they have, especially their family, including Manzo. And the cute little family that Manzo has was seen on her Instagram post of November 29, 2020.

Manzo had posted 6 pictures from her family vacation to The Grand Tetons during the snowy season. In the picture, she was accompanied by her husband and daughter, Lexi Manzo (from her previous relationship).

The three were enjoying their family trip while looking at animal’s footprints in the snowy road. In the caption, Dina wrote, “Spent the entire day trying to find @grizzlybear399 and her 4 Cubs …and I would do it again tomorrow #frozen.”

Every lovable wife appreciates her husband who loves and cares for her, and so does Manzo. So, a day after Husband Appreciation Day, on April 18, 2021, the entrepreneur shared a picture alongside her partner and appreciated him.

“Love you more than I love chocolate,” Manzo wrote with a kiss emoji on the side. While the appreciation for her husband was there, she also added a joke and said that there also should be a Wife Appreciation Day.

At the end of the caption, she went on to give a relationship tip, “ps one of the many secrets to a happy relationship is to make EVERYDAY husband and wife appreciation day! ).

Anniversaries are one of those special days that a married couple looks forward to as it is that day when a man and a woman decided to hold each other’s hands in every dire circumstance.

On June 28, 2021, Manzo and Cantin completed 4 years of their marriage. That special day was made more wonderful when Manzo posted a picture, with a lovely caption, wishing her life partner on completing another year as a couple.

In the picture, they were standing in front of the sea while the sun was setting and the married couple was kissing each other, setting up a perfectly romantic moment. Through the caption, she stated that in all the world, there is no heart for her like his and there is no love for him like her.

The caption ended with: “Happy Anniversary My Love. So incredibly Grateful for you.”

Anywhere With You (September 2021)

Just a day ago, on September 10, 2021, the American television personality took to her Instagram handle to share a photo alongside her husband, that was accompanied by yet another sweet caption.

The picture was simple as the married couple posed for a normal picture. They were standing near a big boat and looking at the picture and the venue behind them, it seems they were on a vacation and about to have a lovely dinner.

In the location tag of the picture, Manzo had added, “Anywhere With You.” The caption was also romantic as she had written, “The person you choose to spend your life with makes all the difference in the world. choose wisely.”

Some moments after Manzo uploaded the picture, her husband took to the comment section and wrote, “love you so much baby,” to which Manzo replied with a kiss emoji.

Well, going by that, it can be perfectly summed up that the marital relationship of Manzo and Cantin is fully filled with joy, happiness, and most importantly, love for each other.