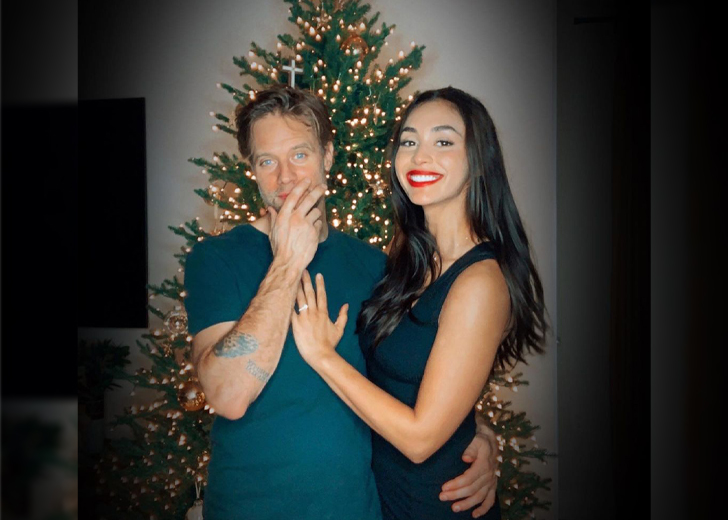 Lindsey Morgan is an American actress who gained prominence in the entertainment industry following her portrayal of Raven Reyes in The CW sci-fi series The 100 (2014 – 2020), in which she has made appearances in almost 100 episodes.

Not only the actress has a great acting career but she also relishes a blissful love life. Morgan is currently engaged in a romantic relationship with a fellow actor Shaun Sipos.

Morgan and Sipos have been together for well over 2 years which has made their fans wonder if they have shared the wedding vows or are planning to do so anytime soon.

Well, the boyfriend-girlfriend duo is yet to tie the knots and legalize their togetherness. However, the fact that they are already engaged with each other can be taken as a sign that they will be walking down the aisle soon.

Yes, that’s right! Morgan and Sipos are an engaged couple. The news of their engagement was announced by the American actress via an Instagram post on December 29, 2020.

Those lovely pictures were accompanied by some lovely words that she had put up as the caption. “2020 coming in with that twist ending. Thank you, my love [Shaun Sipos] for making me the happiest I’ve ever been, every damn day since I met you… and now for the rest of my life no pressure.”

The caption was concluded with her writing, “I can’t wait to see what unfolds next for us on our great, big life adventure.”

Morgan and Sipos Made Their Love Official in 2019

The now-engaged duo first caught the eyes of the public back in early 2019 when they began mentioning each other on Twitter. Once, on February 2, 2019, Morgan tweeted, “@SSIPOS I’m in Brazil, where are you?”

In reply to that, Sipos tweeted that he was right there alongside her, holding her hands. “I’m here… holding your hand,” his reply read.

Through those gushing tweets, it was almost confirmed that they were a thing. But, it wasn’t until mid-March of 2019 that they officially confirmed the love they had for each other.

On March 14, 2019, Morgan took to her Instagram handle to share a picture alongside Sipos and captioned it with a short note by writing, “The Best I’ve ever had.” On the same day, Sipos also posted a picture alongside her and wrote a long paragraph explaining his love for Morgan that ended in “I love this woman.”

Following the confirmation, the two have been occasionally making public appearances and sharing pictures of/alongside each other, either on normal days or on special occasions like their birthdays or Valentine’s Day, and expressing their love for their better half.

Well, going by that, it can surely be affirmed that Morgan and Sipos have developed an unbreaking bond and they will be spending years alongside each other. Perhaps, their wedding might not be too far now that have gotten engaged too.

Who Is Shaun Sipos?

Sipos is a talented Canadian actor who is known for playing the role of Jack Savage in Complete Savages (2004-05) and Eric Daniels in Life Unexpected (2010-11). Altogether, he has 41 acting gigs credited to his IMDb profile.

Going into the details of his early life, the 5 feet 10 inches tall actor was born on October 30, 1981, in Victoria, British Columbia, Canada. His zodiac sign is Scorpio and he is of Croatian descent.

Not much is known about his parents. But, it is known that he has a younger sister named Jessica Sipos, who is also an actress.