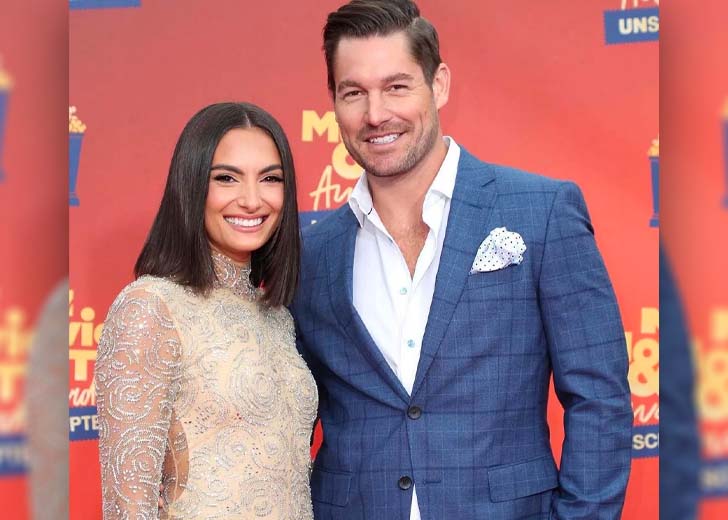 By now, many of you might already be familiar with the duo of Craig Conover and Paige DeSorbo.

The couple went public with their relationship around eight months ago, and they are still going on strong. However, the build-up to that confirmation was quite the ride for the fans of the reality TV stars.

And the same could be said for Conover and DeSorbo’s relationship. It’s so because the two had initially remained friends for years and even dated others before finally expressing their feelings towards each other.

Speaking from the start, Conover and DeSorbo first met each other in the Summer of 2019 during Bravo’s Summer House season 4. DeSorbo was already a part of the Summer House, whereas Conover was there as a guest to attend Kyle Cooke’s birthday party.

After their first meeting, the Southern Charm star DMed DeSorbo on Instagram by sending a painting of her made by an artist, which she had posted. Commenting on that painting, he said, “Wow, this is really cool.”

And in reply, DeSorbo said, “LOL, I know, right?” But after that conversation, they never talked again for almost two years. “So, I don’t know if I nailed it with that response, or that was awful,” DeSorbo told E! News about the conversation in June 2022.

As fate would have it, Conover and DeSorbo again met around two years after they first met and had a short conversation over Instagram. This time, they met thanks to another Bravo show, Winter House.

On the show, the two became co-stars and eventually good friends as they spent 17 days in February 2021 filming the show together in Vermont alongside other cast members. But, things didn’t develop romantically between Conover and DeSorbo as the former was missing his then-girlfriend Natalie Hegnauer.

More than a month after the filming of Winter House wrapped up, DeSorbo and her friends paid a short visit to Conover in Charleston, South Carolina. When their fans knew that, they immediately speculated that the two co-stars were dating.

However, DeSorbo was quick to discredit the rumors as she told the Not Skinny But Not Fat podcast, “Craig and I are a thousand percent not dating. Craig and I have known each other for years. We’ve always gotten along. We’ve always been friends.”

“We have, like, very similar personalities. We are not romantically involved or anything, but we are very good friends,” she added.

Nonetheless, in another interview with ET Online, the reality TV star mentioned that she and Conover took a further step in their friendship and shared a kiss. “On that trip, I realized that Craig was single – and we were nothing but friends on that trip.”

DeSorbo continued, “And then the last night he kind of kissed me. I actually said, ‘It’s crazy that you haven’t kissed me yet,’ and he was like, ‘I didn’t know where we were at that point.'”

Around two months after they shared their first kiss, DeSorbo returned to the sets of Summer House in late June 2021 and began filming the sixth season. At the time, it wasn’t confirmed if Conover would also return to the show.

As days passed, the rumors of Conover and DeSorbo’s romance started to spread all over the internet. And it got fueled when the two attended the PGA Tour’s FedExCup Playoffs on August 19, 2021.

And although they weren’t seen having any PDA-filled moments at the Liberty International Golf Course, their attendance at the event was enough to convince their fans of their togetherness.

Over a month later, on September 25, 2021, the rumored couple was again seen together as they attended their co-stars Kyle Cooke and Amanda Batula’s wedding. DeSorbo had posted a picture alongside Conover via her Instagram stories.

Finally, their relationship was confirmed in October 2021 as the two went public with their romance. Around the same time, Conover talked about his now-girlfriend and their love during an exclusive interview with People Magazine.

He said, “We both had a crush on each other from three years ago when I came to the Hamptons for Kyle’s birthday party. We always had an eye for each other.” He then added that their romance happened naturally.

He continued, “It was done in a healthy way. We built a friendship and got to know each other first, and it all happened naturally. You see the foundation of our relationship start to form on the show.”

Additionally, Conover opened up about why he and DeSorbo kept their togetherness private for so long and mentioned that they wanted to remain out of the public eye while they helmed the initial days as a dating couple.

“It confuses me when people didn’t think it was real or that we were hanging out for publicity. If it wasn’t real then I’d be posting about it. I haven’t posted a thing about it because it’s so real,” he concluded.

Similarly, in the next month, DeSorbo talked about her relationship with Conover and addressed some of the backlashes their romance had received during an episode of the Call Her Daddy podcast with Alex Cooper.

DeSorbo started the talk right off with the backlash and said, “The number one thing that’s really been pissing me off is people are like, ‘Oh they’re just acting and they’re doing this as a PR stunt.’ If that was true, I would straight Ben and Jen this s— and be posting it all over and I’d have the best captions to everything.”

She then talked a little about why she hasn’t made her relationship with Conover Instagram official yet. “The only reason I haven’t posted him is I haven’t taken a grid-worthy pic. And this is my real-life boyfriend, you’re not posting your boyfriend on your Instagram until he says, ‘I love you.'”

Later, in her interview with E! ‘s Daily Pop, DeSorbo stated that she has been spending the holidays with Conover’s families and vice-versa. Furthermore, she was also asked whether there was an engagement proposal on the line or not.

In reply, DeSorbo jokingly said, “I mean, we have only been dating for a couple of months. But if I can trick him into a diamond ring, I’m going to do it!”

DeSorbo posted a photo clicked at a holiday event and captioned it by writing, “Sew in love.” Her caption was also a nod to her boyfriend’s merchandise company named Sewing Down South.

Since making their relationship official on Instagram, Conover and DeSorbo have been flaunting more and more pictures alongside each other. Conover has shared multiple posts where he has shown his support for his girlfriend.

DeSorbo has been supportive of her partner as well. And the most important thing is they seek a future with each other. In a March 2022 interview with Page Six, Conover talked about starting a family with DeSorbo.

He said, “We have talked about marriage and spending our lives together, which we’re happy about. We talk about kids and a family.”

But, the couple is in no hurry to do so, which Conover mentioned during his conversation on the Reality Life with Kate Casey podcast. He said, “I think we would be in Charleston, but I don’t think she’ll ever not have an apartment in New York.”

“We’re just in a fortunate place where we don’t really have to make those hard-cut decisions. We’re just both so busy right now and traveling. And now, we’re getting to start to work together on projects outside of TV, which is really fun.”

DeSorbo recently moved to Charleston to be with her partner during the summer. And before the move, the two were seen spending time at the beach with Conover’s family. Conover later shared some lovely snaps from that outing via Instagram.