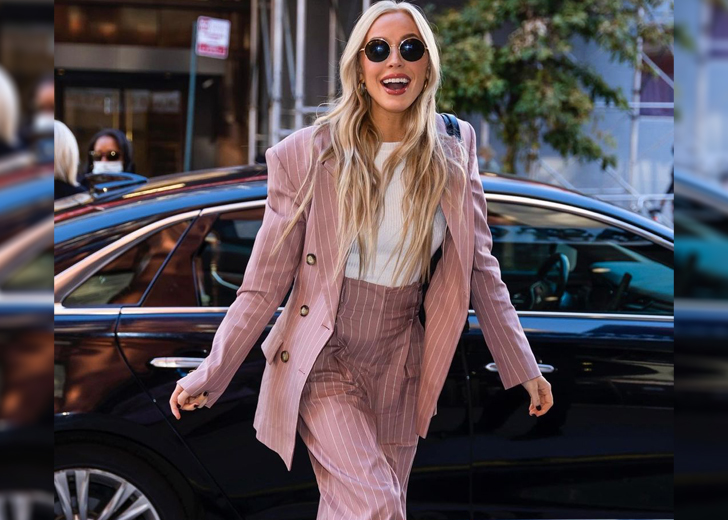 Alexandra ‘Alex’ Cooper, shortly known as Alex Cooper, is a famed internet personality. She is presently gaining her fame through her advice and comedy podcast Call Her Daddy.

The podcast, which she created alongside her former roommate Sofia Franklyn, has grabbed the attention of many. In June 2021, it even made the headlines, as Cooper signed a three-year deal with Spotify worth over $60 million.

While the professional life of the podcaster lies there, many of her listeners are interested to learn about her personal life, including her present boyfriend and dating history.

Before we go ahead and learn about Cooper’s present dating status, let’s get an idea of whom she has dated in the past.

One of her first known relationships was with a Red Sox player whose name is yet to be disclosed. She was in a relationship with him while studying in her sophomore year at Boston University.

As per reports, her then-boyfriend was over a decade older than her, and their relationship was toxic. Due to those reasons, they eventually parted ways. However, it wasn’t the end of failed relationships for Cooper.

Following her split with that Red Sox player, the podcast host had several failed relationships with many athletes.

Some of her past relationships are also widely known as her former boyfriends are well-known in the sporting arena. For example, one of her relationships was with Noah Syndergaard, a New York Mets baseball player.

Cooper began dating him in April 2017, before she was even famous. While they were dating, several PDA-filled pictures had surfaced on the internet.

Their last appearance as a couple came in December 2020, during the Knicks basketball game. Later, in the same month, the baseball player confirmed his split with Cooper when he tweeted, “Baseball is my significant other.”

On April 2, 2021, Cooper then revealed that she was in a brief relationship with renowned YouTuber Logan Paul and had even hooked up with him. But it is unknown how and when the two first came across each other.

While mentioning her fling with the YouTuber, Cooper noted that it was supposed to be a secret, and she only said it now after learning Paul was talking about it in the first place.

However, after she said these statements, Paul took to his Impulsive podcast and stated that Cooper was the first to talk about it in public and he had only talked about it with one of his close friends.

Who Is Alex Cooper Dating Now?

Copper is presently in a relationship with a movie producer whom she began dating in 2020. She has frequently mentioned her current boyfriend, either on her podcast or on her social media posts.

However, though she has been vocal about her current relationship, she is yet to share a picture with him or even announce his real name. To this date, she has only referred to her partner as Mr. Sexy Zoom Man.

Cooper has admitted that she gave her partner this nickname as they met each other during a business Zoom call during the COVID-19 pandemic. Later, she met him face-to-face in his hometown, Los Angeles, and the duo subsequently began dating.

During an episode of her podcast, she even claimed that her boyfriend was mature and very different from her past partners. In addition, she said that he respected her job and career line.

She has also revealed that her significant other is an actor who formerly worked on an NBC show. After she gave such details, her fans have pieced out the hints and have come up with a possible conclusion on whom her boyfriend might be.

The speculations are that Cooper’s present boyfriend could be Matthew Kaplan, aka Matt Kaplan. However, nothing can be confirmed until Cooper herself makes the details public. But we wish her love life with her secret partner goes miles.

Is 'Loki' Star Sophia Di Martino Married? Shares Baby With To Be Husband