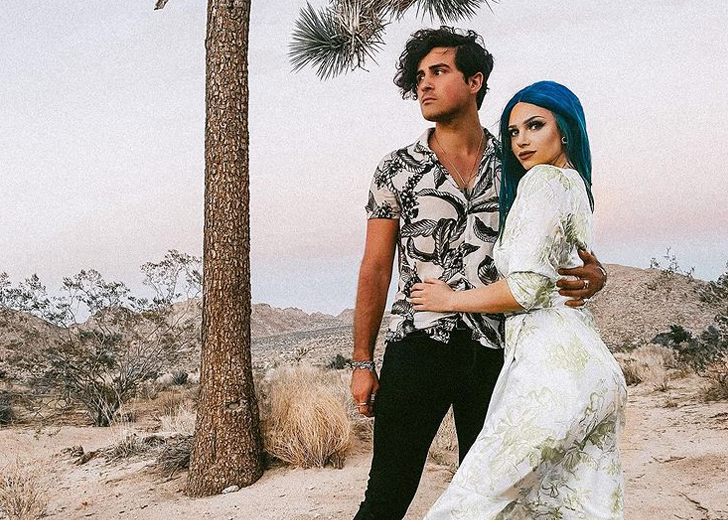 Renowned YouTube star Anthony Padilla has been in a longtime relationship with his girlfriend Mykie. The couple began dating each other in mid-September 2019 but decided to keep it secret for a while.

On December 14, 2019, Padilla publicly announced their relationship via Instagram. On the announcement post, the YouTuber had shared a couple of pictures alongside his partner and written a lengthy yet heartful caption.

In the beginning, he wrote that “keeping a relationship this incredible a secret for so long has been a challenge.” Later, he went on to mention that Mykie is the most wonderful human he has ever had the pleasure of knowing, and he is fortunate enough to call her his girlfriend.

“and beyond that, a partner and true teammate in life. her charisma and the warmth she radiates and her sheer talent and creative drive holy-shit I finally get to introduce you to my favorite person on this entire planet,” he added.

Following the announcement, both of them began to flaunt pictures alongside each other and showcase their love and care for each other.

Recently, on the occasion of Padilla’s 34th birthday, September 16, 2021, both of them took to their Instagram handles to share the same pictures and captioned it, saying that they celebrated their second dating anniversary that past week.

Going by all of that, it seems like Padilla and his beau are have strengthened their bond very much, and the wedding bells might not be that far away. Currently, they reside happily with Mykie’s two pet dogs, Ripley and Creature, by their side.

Who Is Anthony Padilla’s Girlfriend, Mykie?

Padilla’s present girlfriend, Mykie, is a renowned personality on her own. She runs the YouTube channel named Glam&Gore, a make-up channel that has garnered over 4 million subscribers and 517 million views.

As per her YouTube channel, she is a self-taught Los Angeles-based professional beauty and special effects make-up artist.

Mykie is regarded as one of the top make-up artists on the internet, and she might have reached more heights. However, her health issues derailed those, and she had to leave YouTube. It is reported that she has neck/spinal issues which lead to various ailments and chronic pain.

The YouTube star has been very vocal about her health update and regularly shares updates via her Instagram stories. Besides, she even has created an Instagram story highlights that only contains details related to her health.

Born on November 1, 1989, in Philadelphia, Pennsylvania, Mykie goes by the birth name of Lauren Mychal Mountain. Currently, there are not many details available on her early and family life.

Is Anthony Padilla Married to a Wife?

Currently, there have been no reports of Padilla sharing the wedding vows and getting married to a wife. However, there have been some instances where he was engaged or was in a longtime relationship.

Padilla’s first known relationship was with a fellow YouTuber named Kalel Cullen. They began dating on October 10, 2010. Less than three years later, on June 29, 2013, the two took a further step in their relationship and got engaged.

However, their togetherness wasn’t meant to last forever as they parted ways over a year after being engaged, on December 4, 2014. Initially, the former couple said that their split was mutual, and they are still friends.

When Padilla’s fans began accusing Cullen, she responded to those allegations via Twitter and made several tweets. In one tweet, she had written, “I would appreciate it if you removed the false accusation from your video. It’s been two years. You’re better than this.”

“I’m not an easy person to love. You knew that. But YOU made the choice to be w/me, time & time again,” she wrote in another tweet.

Some of the other tweets that Cullen made were, “You know DAMN WELL that I wasn’t using you. I’m ashamed that you would say that, knowing that your fans would come for me,” “I’m truly sorry for the hurt I’ve caused you. It’s why I tried leaving so many times. And I’m so happy to see you happy!” and “But let’s leave the past in the past. There is no point in bringing it up now. It’s time to move on. Best wishes.”

Despite those tweets, people still blamed Cullen. However, as time passed, people forgot the topic and moved on.

As for Padilla, after his split with Cullen, he began dating a comedian named Miel Bredouw. Their relationship started in early 2015, but the duo kept it low and very private. On September 22, 2017, he finally introduced her to the world.

Everything was going fine for the duo until it wasn’t. It’s reported that the now-former couple ended their togetherness in September 2019. The reason behind their split is still unknown.

Following that, Padilla formed a new relationship with his current girlfriend, Mykie, and is still together with her.

Coming over to the past relationships of Padilla’s present partner, she was previously in a relationship with Chase. They officially began dating on May 24, 2014. Marking their two years dating anniversary, Mykie even shared a picture alongside her former beau.

But, the two eventually parted ways. Apart from that, there is no further information regarding Mykie’s past relationships.