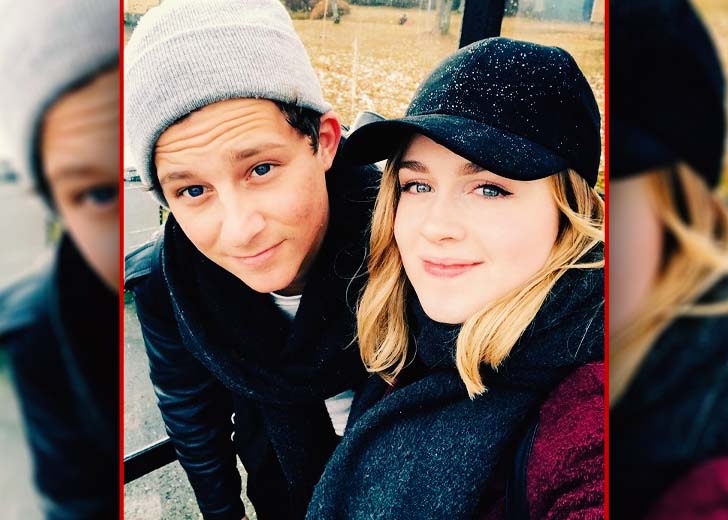 Charlie Gustafsson is a talented Swedish actor who mainly gained fame for his portrayal of Calle in The Restaurant aka Vår tid är nu. His other movies and TV shows are Rederiet, A Thousand Times Stronger, Double Life, and Änglavakt.

Soon, he will be seen in the U.S. theaters when the romance-drama movie A Taste of Hunger (original title: Smagen af sult) gets released on January 28, 2022. In it, he plays the role of Frederik.

While the actor has an open professional life, he tends to be a bit private in terms of his personal life. Is Gustafsson dating a girlfriend or not?

Charlie Gustafsson is presently in a relationship

As per reports, Gustafsson and Deasismont first met each other around early 2015 through mutual friends. It’s also reported that the actor fell in love at first sight with his now-girlfriend, but it took some time before they officially began dating.

Their togetherness started in July 2015, and since then, they have always been together. The couple has made several red carpet appearances and accompanied each other at numerous events at different places.

After being in a relationship for two years, in 2017, they moved in together in an apartment in Södermalm, Stockholm. And as time passes, their togetherness seems to be stronger.

Additionally, as they have a common profession, they have a clear understanding of what’s going on and that they might have to stay apart from each other for work. Gustafsson talked about the same thing during his interview with Hant in 2018.

Similarly, in one of his other interviews, Gustafsson mentioned that as he and his partner are actors, they talk a lot about their works at home.

Charlie Gustafsson and Amy Deasismont like to keep their relationship private

Both Gustafsson and Deasismont gained fame at an early age through their respective works. Due to that, they were always in the sights of the media and public.

When they began dating each other, there was a lot of media coverage on their relationship. Nonetheless, in the initial days, they both answered questions about their togetherness in their interviews.

But, as time passed, those same questions became weary. As a result, they ultimately decided to keep most things private and answer lesser questions about their relationship.

Gustafsson reflected on the same thing during his appearance on the Värvet podcast in February 2021. He described that it gets a “little uncomfortable” when interviewers ask him about his love life with Deasismont.

He added, “And therefore I have become more withdrawn in interviews. I do not know how to relate to it. It also feels strange to say: ‘I do not want to talk about it.’ It’s almost too late because you’ve done it.”

“Now it’s ridiculous if I were to sit and say that I do not want to talk about her at all, it will be very strange when you have done it before.”

Additionally, he talked about how his relationship with Deasismont was covered by outlets based on their Instagram posts, which neither of them was comfortable with.

In order to manage that, the duo decided to create private Instagram accounts – for both of them – for their family and close friends only. As limited people are watching those contents, they could share more personal photos that they don’t share on their public accounts.

As mentioned earlier, Gustafsson’s girlfriend is a Swedish actress and singer. Deasismont first tasted the limelight at the age of 13 when she released her single What’s in It for Me, which became an instant hit in Sweden, Poland, Norway, Finland, and Denmark.

Following that, she released several more songs and albums, which equally gave her the spotlight. After a successful music career, she decided to put it on a halt to pursue a career in acting.

As of this writing, she has appeared in several movies and TV shows, including LasseMajas detektivbyrå, Prinsessan Lillifee, Modig, My Skinny Sister, Gösta, Nelly Rapp: Monster Agent, Thunder in My Heart, and Knutby.

Born in 1992, she celebrates her birthday every year on April 15. Her birth name is Amy Linnéa Deasismont, and her zodiac sign is Aries.

What Are The Hot Trends In Fashion Shaping Up In 2022?