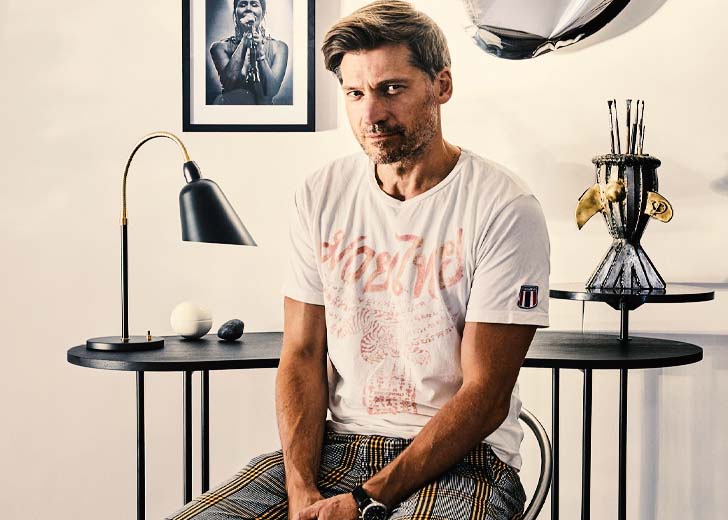 Nikolaj Coster-Waldau is a renowned actor who will be playing the male lead role of Carsten in the romance-drama movie titled A Taste of Hunger (original title: Smagen af sult).

The movie is set to release in the United States on January 28, 2022, following its release in its origin country, Denmark, in June 2021.

Its official synopsis is: “A couple who sacrifice everything to achieve the highest possible accolade in the culinary world – a Michelin star.”

Coming back to the actor, he gained widespread fame after his portrayal of Jaime Lannister in the hit HBO television show, Game of Thrones (2011-19). Read on as we learn his age, height, net worth, and more!

Born in 1970 in Rudkøbing, Denmark, Coster-Waldau is currently 51 years of age. He celebrates his birthday every year on July 27. His zodiac sign is Leo.

On the occasion of his 51st birthday, his wife of 23 years, Nukâka Coster-Waldau, shared a lovely birthday post via her Instagram handle. She shared one old picture and another latest picture of them and wrote a heartfelt caption.

How tall is Nikolaj Coster-Waldau?

The New Amsterdam actor has a tall body frame and stands at a towering height of 6 feet 2 inches or 1.88 meters. He has an athletic built body and regularly maintains his body.

How much is Nikolaj Coster-Waldau’s net worth?

The Danish National School of Theatre and Contemporary Dance graduate has come a long way since he made his acting debut in 1991.

As of now, he has gained huge success thanks to his impressive performances in numerous movies and TV shows. In addition to fame, he has accumulated a healthy sum needed to fulfill his and his family’s small and big needs.

So, how much is his net worth? As per Celebrity Net Worth, Coster-Waldau’s salary per episode in a television show is around $1.1 million, and his total net worth is $16 million.

Now that we have mentioned his estimated salary per episode and total net worth let’s look at the career that has helped him earn such a hefty amount.

Coster-Waldau made his acting debut in 1991 through a short film titled Requiem. After that, he took a break for two years, and upon his return, he only played smaller roles.

From 1995 to 2005, he appeared in movies and TV shows such as Who’s Hitler?, Bent, The Cable Club, Lock, Stock…, Black Hawk Down, The Bouncer, The Good Cop, and Kingdom of Heaven.

By 2005, he had managed to gain healthy limelight and established himself in the entertainment industry. The fame was boosted when he played in The Baker, New Amsterdam, Himmerland, and The Left Wing Gang.

However, he received the utmost limelight in 2011 when he started playing the role of Jaime Lannister in Game of Thrones. He played the role till 2019 and appeared in 55 episodes.

Some of his acting gigs from 2011 to 2021 are Blackthorn, Oblivion, The Other Woman, Gods of Egypt, 3 Things, Domino, Suicide Tourist, The Day We Died, and The Silencing.

Presently, he is waiting for the movie, A Taste of Hunger, to release in the United States. Furthermore, he is working on two of his upcoming film: God Is a Bullet and Against the Ice.