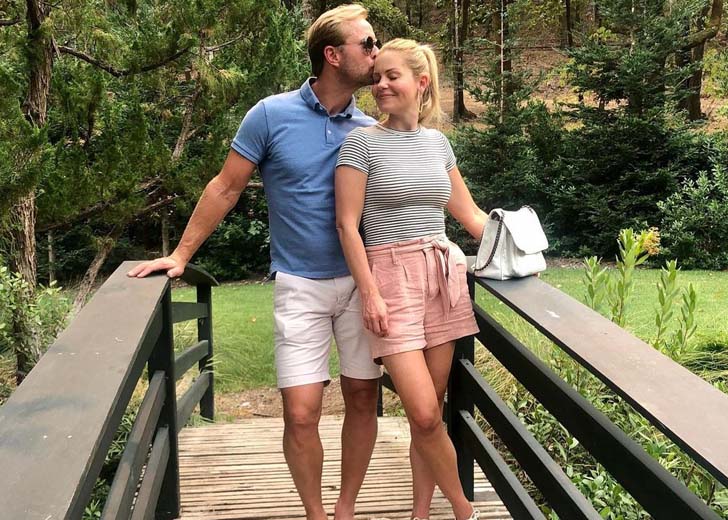 Candace Cameron Bure has been a married woman for more than 25 years. The American actress is in a blissful marital relationship with her husband, Valeri Bure, a former Russian NHL hockey player.

The married couple first met each other in 1994 at the 3rd Annual Rock’n the Puck Celebrity Hockey Game. Candace was there with her Full House co-stars Bob Saget, Dave Coulier, and Lori Loughlin — Coulier had invited them all.

Coincidentally, Valeri was also there but on the ice as a player. The actress shared these details via her Instagram handle amid her 25th marriage anniversary with Valeri on June 28, 2021.

Candace’s Instagram post consisted of three pictures, and shifting the focus towards the second one, she wrote, “Swipe left to the second photo. Look closely. Do you see Lori and me watching the game?!”

“Swipe to the third photo. Centered is a super cute, blonde-haired, extremely talented Russian pro hockey player in the blue helmet talking with his talented, super-star brother, Pavel,” she added, talking about her husband and his younger brother.

Below is a brief look at the couple’s 25 years of togetherness!

Candace Cameron Bure and Valeri Bure got married in 1996

Sometime after their first encounter, Candace and Valeri eventually started dating. And On June 22, 1996, they shared the wedding vows with their close friends and family members in attendance.

Since then, the couple has always been together despite some ups and downs in their marriage and hectic work schedules. Nonetheless, none of it has affected their relationship, and they have always managed time to spend together.

Their togetherness became more strong after welcoming three children into their family. The two’s first child is a daughter named Natasha Bure, whom they welcomed on August 15, 1998.

Not much is known about the couple’s eldest son, Lev, as he doesn’t use social media platforms. However, he was set to get married after being engaged to his girlfriend, Taylor Hutchison. But, their engagement was called off in April 2021.

The news of Candace and Valeri’s son’s broken engagement made headlines. Around seven months before, in September 2020, the couple had become a part of the headlines after Candace shared a couple of pictures with her husband on Instagram.

In the second picture she posted, Valeri’s hands were over his spouse’s breasts. The image led the couple to receive backlash from a few Christian community members — Candace and Valeri are devoted Christians.

However, the Hallmark star stood up to the backlash and said that sex is a healthy part of her relationship with her husband, and the fun and flirting they do together are some of the things that make their marriage work.

Candace’s statement above responding to the backlash she received came a couple of months later, in November 2020, during her appearance on the Confessions of a Crappy Christian podcast.

“This is something to be celebrated as a Christian. Sex doesn’t stop once you get married. Sex is the blessing of marriage and I hate when Christians are like, no, you have to pretend like you’ve never had sex, and we only know that you’ve had sex three times because you’ve had three children.”

She continued, “If we are to promise ourselves for one another and preach saving yourself for marriage, then sex needs to be celebrated within marriage.”

In April 2021, Candace revealed that the pandemic helped strengthen her relationship with her husband. She stated that she and her partner realized how much they love each other.

“We have busy lifestyles and we both travel a lot for our jobs. So when you’re back at home and you’re spending 24 hours a day [together], it can either go both ways. It’s going to be good or bad, and it has been really great,” she added.

“We just got to enjoy one another and realize that, ‘Oh, yeah. I really love you. It’s been 25 years, and you’re awesome. I remember why I married you,’” Candace concluded.

A month later, in May 2021, Candace was asked the secret behind her long-lasting marital relationship with Valeri. In reply, she told the Daily Blast Live hosts that intimacy is one of the many secrets.

She said, “I think it’s [intimacy] important. You’ve got to keep it up. The longer you’re married it’s so easy to take each other for granted. You know each other so well that you forget, so you have to keep it spicy. I love that. My husband and I do.”

She then said that intimacy is one of the reasons she and her spouse will be celebrating 25 years of marriage. “Just do something unexpected. Maybe lay in a way you don’t normally lay. He’ll be like ‘woah.’ You’ll surprise him!” she added.

Furthermore, the 46-year-old Los Angeles native once again mentioned some tips for a long-lasting marriage; a couple of days after she and her partner celebrated their 25th wedding anniversary at Pebble Beach Resorts.

Sharing some snaps from the celebration, she first thanked God in her caption. She then mentioned that she is often asked for marriage advice. “What’s the secret? Lord knows I will never write a book about it because we are still learning every year, every day.”

“Grace. Grace. Grace. Communication (which is so important but difficult when one partner isn’t willing.) Sex. Laughter. Patience. Lots of patience. Love (a verb. which must be put into action, it’s not just a feeling.),” Candace continued.

As she went on, she wrote that no marriage is perfect, not even her with Valeri. “But through thick and thin, ups and downs, God has blessed us tremendously with guidance and perseverance. I believe God is the secret sauce.”